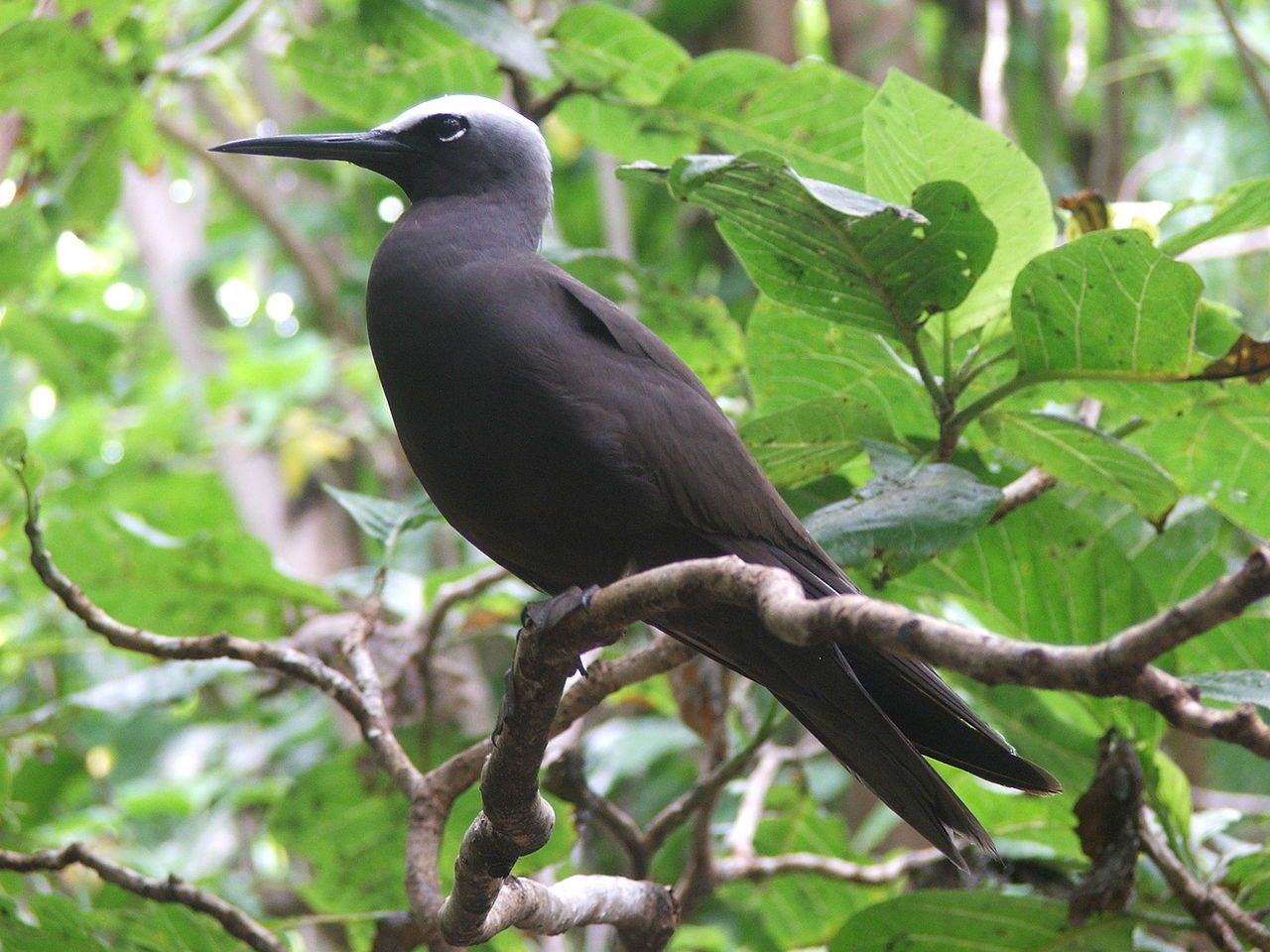 Black noddy (Anous minutus) are black colored seabird species in the family Laridae. They are commonly found in the ocean areas across the tropical and temperate zone. They have an overall black plumage with a white crown area and gray back-neck. They have black legs and feet and a short tail. Their bill is pointed and sharp and have dark eyes with white patches over and under it. They either breed for whole year or maintain a season. Their nests are built at a moderate height and in those nests, the female birds lay a single egg. Their population is living happily in their natural habitat and are considered a species of Least Concern.

This was a small introduction of this bird. For more detailed information, go through this whole article. There are interesting facts waiting for you!

What type of animal is a black noddy?

What class of animal does a black noddy belong to?

Black noddies belong to the class Aves. The also belong to the order Charadriiformes, family Laridae and genus Anous. The binomial nomenclature of their species is Anous minutus.

How many black noddy are there in the world?

Black noddy (Anous minutus) are birds with conservation tag of Least Concern. They are found across the Pacific Ocean, Caribbean sea, Atlantic Ocean and in northern parts of the Indian Ocean in huge numbers. So counting their population in numbers is a bit tough.

Where does a black noddy live?

Black noddy (Anous minutus) birds belong to the family of sea birds and spend their day flying over the sea in search of food. At night, they fall back to nearer islands and can be found there.

What is a black noddy's habitat?

The distribution range of black noddy (Anous minutus) species across the globe is widespread. They inhabit the tropical and subtropical ocean areas. Their colonies can be commonly seen flying over the Pacific Ocean, Atlantic Ocean and Caribbean sea between South and North America. They are also found in the northern parts of Indian Ocean.

Who do black noddy live with?

Black noddies are type of seabirds. And sea birds are always seen in colonies. But there is no recorded data on exactly how many birds can be present in a black noddy colony.

How long does a black noddy live?

Black noddies are typically moderate to long living seabirds. Their average lifespan range is estimated between 15-20 years. But in special cases, they can survive to an age of 25-26 years.

Breeding in black noddy birds happen very smoothly. They are monogamous birds in nature and form strong bonds with their partners that last for minimum a year or so. The male birds perform interesting flying tricks and do a lot of different body movements and through all these, they attract the female birds for breeding. Once they form a breeding pair, they can be seen flying in flocks while doing aerial tricks. The breeding season in these birds depend on their habitat and surroundings. Some birds breed through out the year while the others maintain a strict breeding season. The nesting happens at a moderate height. For nesting, they choose spots higher in trees or in high cliffs and sometimes in sea caves also. Both the male and female birds together construct their nests. Males fetch the building materials and the female assembles those materials to build a nest. For laying eggs, they either build a new nest or reuse a previously built nest. After breeding and constructing their nests, the female birds lay one single egg in it and after the egg is laid, it goes through an incubation period of around 34-35 days. Fledging time in this species is estimated between 40-52 days.

According to IUCN red list, black noddies are considered as species of Least Concern. They are present in good quality number across their habitat in the tropical and subtropic areas.

The black noddy is also known as white capped noddy because of their white cap area. Black noddy are a mainly dark colored bird species with dark legs and a pointed sharp bill. Their body is mostly matte black in color. There is a white cap (white spot) at the top of their head. That white cap blends with the black feathers of their body and that blending area is somewhat gray in color. Their legs and feet are black in color and equipped with sharp claws. Their bill is black in color and are straight and pointed. The pointed bill of these birds help them in catching small fish from the ocean. They have dark eyes and over and under those eyes, they have white spots which look beautiful. The color of lining of their mouth varies in different habitats. Black noddy (Hawaii and Atlantic inhabitants) have orange colored lining and birds living in Pacific Ocean near Australia have a pinkish colored mouth lining. There is no difference of plumage in male and female species. They are medium sized birds who grow to a length range of 14–15 in (35-37 cm) and have a weigh range between 3.5–5.1 oz (98-144 g). They have long slim wings and their wingspan is estimated between 26–28 in (66-72 cm).

White capped noddy are elegant looking sea birds. They are not that cute or cuddly but are good looking bird species.

Black noddies communicate through body language and their wide ranged vocalization. They can create various types of calls.

How big is a black noddy?

Black noddy are medium size seabirds found commonly in the tropical and subtropical areas in Pacific, Atlantic and northern Indian Ocean. They are not that big in size and their body length is between 14–15 in (35-37 cm) with a body weigh of 3.5–5.1 oz (98-144 g).

How fast can a black noddy move?

They are agile seabirds but information about exact black noddy flight speed is not yet available.

How much does a black noddy weigh?

There are specific names given to the male or female black noddy birds. Both sexes are very simillar looking in the field of both size and plumage. Juvenile black noddy are most likely to be pale in color.

What would you call a baby black noddy?

Noddies are primarily carnivorous in nature. They mostly feed on small fish and squids. They are seen in groups, flying over the sea surface in search of fish and other small organisms. They take advantage of the situation when some predatory fish chases small fish colonies to the surface of the ocean. It makes their work a lot easier.

White capped noddies are seabirds who prey on fishes and squids. They cause no harm to humans. Rather they are more tolerant towards humans and generally don't attack them.

Not at all. Noddies are specially wild bird species who belong to the open atmosphere. They are social birds who live in colonies and hunt on mostly fishes. If kept in a confined area, this bird will never survive.

Black noddy is similar to the black tern. The black noddy and black tern both form the tern family, which is Laridae.

What is wingspan of black noddy?

Black noddy birds have thin and long wings which help them fly swiftly over the water surface. They have a wide wingspan of 26–28 in (66-72 cm).

Comparisons with other noddy species

Here at Kidadl, we have carefully created lots of interesting family-friendly animal facts for everyone to discover! For more relatable content, check out these large frogmouth facts and frigate facts pages.

You can even occupy yourself at home by coloring in one of our free printable black noddy coloring pages.