Did You Know? Fungus Beetle Facts 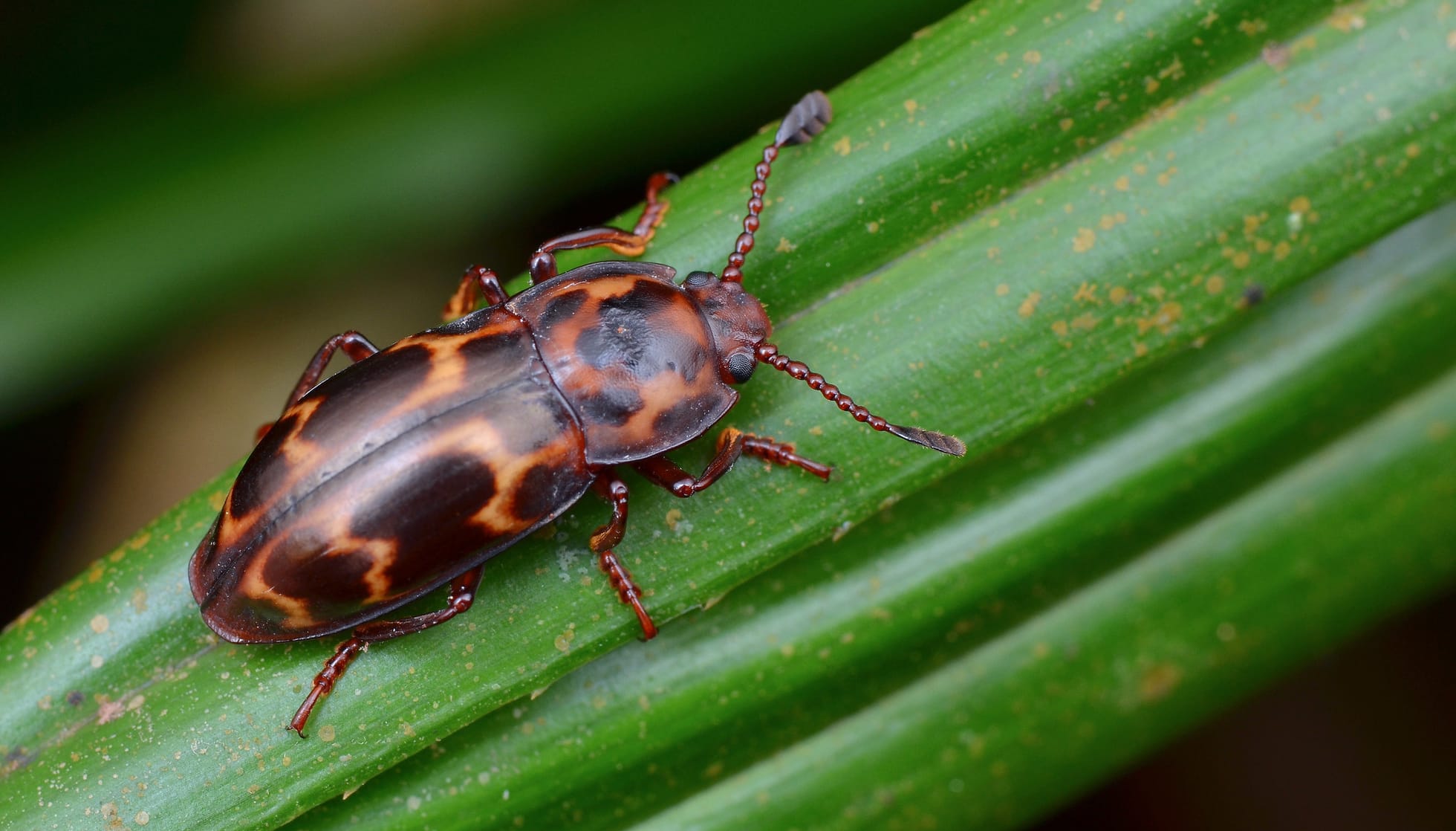 ‘Fungus beetle’ is the common name used for describing more than a few thousand beetle species. These insects look different from each other but share a common characteristic. All these insect species are attracted to damp or moisture, mildew-growing, moldy, humid conditions. They can be found in all kinds of habitats but mostly thrive well near freshwater habitats and dense foliage.

The most common fungus beetle that’s found in all the biogeographic realms of the world is the reddish-brown or the dark brown silken fungus beetle. Another extremely common fungus beetle species is the minute brown scavenger beetles from the family Latridiidae. These are brown or black tiny beetles with a short, hairy body and clubbed antennae.

They often form a major part of the fauna found in grain storing areas where bulk produce is stored for long periods during rains, damp winter, and autumn. The presence of these insects indicates the condition of grains, too.

You may also check out the fact files on Atlas beetle and water beetle from Kidadl.

What type of animal is a fungus beetle?

Fungus beetles are insects in the Animalia kingdom.

What class of animal does a fungus beetle belong to?

Beetles are arthropods, part of the insect family.

How many fungus beetles are there in the world?

Fungus beetle is a common term used to describe a group of almost 3500 beetle species. They are widely distributed all over the world, in different locations, under varied climatic conditions. Most tropical beetles belonging to the insect order Coleoptera are colorful and bright with their red, orange, black, yellow patterns. The adults feed on fungi like mushrooms and molds.

Where does a fungus beetle live?

What is a fungus beetle's habitat?

The hairy fungus beetle is a species that’s common in North America, Britain, Asia, and almost everywhere in the world. These cosmopolitan beetles, like most similar insects, are associated with damp and moisture-laden conditions. The development of mold and fungi in such conditions attracts them as these beetles feed on spores and fungi. You will find them anywhere in fungus-growing areas, moldy grains, damp newspapers, moist food packages, in moist dark corners of the pantry, and cellars.

Sometimes, these fungi-feeding insects are live in rotting plant material, woodpiles, carpeted areas, termite nests, wherever they can find moisture. Common beetles like the pleasing fungus beetles are found in all kinds of climates and latitudes including the subantarctic islands. Apart from that, the insects are found in temperate regions but thrive best in a tropical climate. Many species of beetles have even adapted to the aquatic environments and other habitats, living in alliance with bugs like ants and termites.

Who do fungus beetles live with?

How long does a fungus beetle live?

Being from various families, fungus beetles of different species have different lifespan. Some may complete their lifecycle within fourteen days and some adults may live up for years.

A female fungus beetle usually lays eggs on a surface that can serve as food substrate for the larvae when they are born. These can be rotting tree stems or fruiting bodies. The females of each species lay a variable number of eggs that are placed loosely. The young larvae hatch in a week or two and start feeding on mold immediately.

The larvae are usually whitish, cylindrical, and have a segmented body. In the next stage of metamorphosis when the larvae turn into a pupa, they become pale yellow and still feed on the fungal substrate. The larvae to pupa stage take about three to six weeks and the time varies for different species. The adults emerge in different sizes and shapes in time. It also depends on their species, temperature, and relative humidity of the habitat.

The conservation status of fungus beetles is of Least Concern.

Fungus beetles come in different shapes, sizes, colors, and appearances. Their main body features are their two pairs of wings. The pair of wings in front is modified and protects the delicate hind wings. These insects vary in measurement and their overall look. All beetles undergo complete metamorphosis. They begin their life from the egg stage, turn into larva, and pupa, before becoming adult insects.

The pleasing fungus beetles are usually slim, have a smooth body. Horned fungus beetles look like armored beetles. They are mostly active at night. Beetles have different body colors. Some are bright red, reddish-brown, orange, and some are dark brown or black.

Beetles are insects that are considered pests thus cannot be called cute or cuddly.

How big is a fungus beetle?

The largest arthropods in the world are coconut crabs that can grow up to three feet. Compare to them the pleasing fungus beetle grows up to 0.13 in (0.33cm) and is 277 times smaller than the coconut crab.

How fast can a fungus beetle run?

Beetles don’t all move at the same speed. Tiger beetles are known for their running speed. Cicindela hudsoni, a tiger beetle species, can run at the speed of 5.6 mph (9.01km/h).

How much does a fungus beetle weigh?

Since fungus beetle is a common name given to a wide variety of tiny beetle species it is difficult to ascertain a common weight.

The male and the female fungus beetles have no special names.

What would you call a baby fungus beetle?

Beetle larvae go through a metamorphosis after they are born until they reach they become adults. They do not have different names for their baby stages.

Fungus beetles feed on fungi of various kinds. These insects eat mold, mildews and are attracted to musty smells.

How did fungus beetles get their name?

As the name suggests, the term fungus beetle was coined from the fungi feeding habit of these insects. These beetles feed on mold, mildew, spores of fungi.

Fungus beetles are considered pests. They are not kept as pets. People use various methods like spraying peppermint oil, using traps, vacuum-cleaning beetle-infested spots to keep away the pests from their homes.

Various fungus beetles, like ground beetles and rove beetles, prey on small caterpillars, insect larvae, soft adult insects, and bug eggs. The feeding habits of certain species of fungus beetles help in controlling bugs in homes and gardens. Various species of these beetles feed on plant-sucking insects that kill plants, making them a gardener’s friend. In many cultures, beetles are considered good luck symbols. A beetle landing on someone is considered to bring good luck and crushing a beetle is thought to bring bad luck.

How many species of pleasing fungus beetles are there?

Beetles of order Coleoptera, to which pleasing fungus beetles belong, are known to have 350,000 species. Having such a huge suborder, these insects are considered to form the largest group of animals on earth.

Here at Kidadl, we have carefully created lots of interesting family-friendly animal facts for everyone to discover! Learn more about some other arthropods including bombardier beetle, or Christmas beetle.

You can even occupy yourself at home by drawing one on our fungus beetle coloring pages.