21 Amaze-wing Facts About The Gannet For Kids 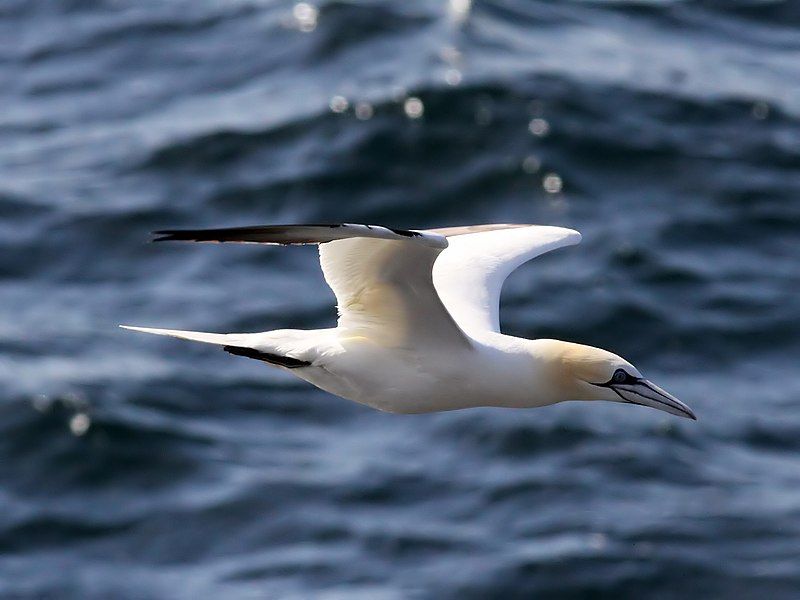 There are three types of gannets which are the northern gannet, the Cape gannet, and the Australasian gannet. The northern gannet became formerly sought after for food in parts of its range, and this traditional exercise continues to go within the Outer Hebrides of Scotland and the Faroe Islands.

The favored nesting sites of these species of gannets are on coastal hillsides or the surface or head of the cliffs. If those are not available, gannet birds will nest in a colony on islands or flat surfaces. Nests are built from seaweed, plants, earth, and particles from the sea.

If you like these, do check out our fact files on palm cockatoo and umbrellabird.

What type of animal is a gannet?

The gannet bird is a seabird and the northern gannet bird is the biggest species of the gannet family. This bird is local to the coasts of the Atlantic Ocean and its breeding places are in Western Europe and northeastern North America.

What class of animal does a gannet belong to?

Gannets, like northern gannets, are the largest seabirds of the order Suliformes and belong to the Aves class of animal.

How many gannets are there in the world?

Where does a gannet live?

The northern gannet's breeding range is on each of the side of the North Atlantic on coasts along the Gulf Stream. There are nesting colonies within the Gulf of Saint Lawrence and at the islands off the east coast of Canada. Northern gannets normally nest in large colonies, on cliffs overlooking the sea, or on small rocky islands. The water temperature needs to be cool enough for Atlantic mackerel and herring, the primary food supply for gannet birds. These regions additionally overlie the continental shelf.

Northern gannet nesting colonies may be located within the far north of these areas where it can be very cold and stormy. The northern restriction in the gannet's breeding range relies upon the presence of waters that can be freed from sea ice throughout the breeding season. Therefore, while Greenland and Svalbard provide appropriate breeding sites, Arctic areas have summers that can be too short to permit northern gannets to nest their eggs and raise a brood, which calls for about 26-30 weeks.

What is the gannets' habitat?

Gannets, like northern gannets, forage particularly in saltwater, even though they sometimes follow fish into brackish mouths of huge rivers, and wandering individuals have turned up in uncommon places within the Great Lakes or different inland freshwater bodies. They mostly keep away from Arctic and tropical waters, mainly spending their lives from the latitudes of eastern Canada to the Carolinas. A few gannets are often found in Florida and the Gulf of Mexico. It is unusual to see a gannet flying over very deep water and they prefer to stay over the continental shelf. This is where their primary prey species are found in the sea. For nesting, they choose cliff ledges at the rims of bays or oceans, in particular locations near huge concentrations of prey fish.

Who does gannet live with?

Like the Australasian gannet, gannets live in a huge colony on the coast of the sea and headland or islands. Gannets are monogamous birds, so they live in pairs during breeding and mate for life.

How long does a gannet live?

The northern gannet, one of the largest seabirds, lives for up to 35 years in the wild.

The favored nesting sites of these species of birds are on coastal hillsides or cliffs. If those aren't available, the northern gannet will nest in a colony on islands or flat surfaces. Nests are built from seaweed, plants, earth, and particles from the sea. Adult males normally acquire the materials. The northern gannet lays one egg that is light for such huge seabirds. If the egg is broken or damaged inside the nest, gannet birds will lay another egg if the primary is lost. Incubation takes 42-46 days, for the duration of which time the egg is surrounded by heat produced by the brooding bird's warm, webbed feet in the nests. The young birds reach maturity after 13 weeks.

Gannet birds are not endangered, and the IUCN lists gannets as a species of Least Concern, as they are extensively found around the world. There is a big population that appears to be developing because of excessive breeding success with 75% of eggs generating fledged young.

The adult plumage is white with darkish brown to black-tipped wings. The primary flight feathers, initial coverts, and alulae are darkish. The head and neck are tinged buff-yellow, becoming distinguished during the breeding season. Males are more deeply colored than females. The eyes have a mild blue to mild gray iris surrounded by a skinny black ring of naked pores and skin. The beak is long, robust, and conical with a slight downward curve on the end, and a pointy reducing edge.

In adults, the beak is blueish gray with darkish gray or black edges. There is a black groove going the length of the mandible that merges into the pores and skin across the eyes. A black band of naked skin additionally separates the flight feathers of the brow and throat from the bill, which offers the gannet some kind of face markings. The feet are joined by a membrane that can range in coloration from darkish gray to darkish brown. There are colored strains running alongside the feet that maintain alongside the legs. Northern gannets are barely bigger and have a thicker bill than the Cape gannet.

Gannets like the Australasian gannet are cute because of their unique appearance and black-tipped wings.

The Cape gannet actively signs its presence while foraging at sea. They emit calls solely when conspecifics had been seen in their location, and that they tend to call loud while in a big colony.

How big is a gannet?

How fast can a gannet fly?

Adults of these species of birds use their huge wings to fly at speeds of 40.4 mph (65 kph).

How much does a gannet weigh?

There are no different male and female names for these species of gannets.

What would you call a baby gannet?

Young gannets are known as fledglings.

The diet of gannets includes fish, squid, and shrimp. These species of birds dive in the water to catch fish and other creatures for food and then bring it back to the gannet colony. They eat fish such as herring, capelin, smelt, pilchard, and mackerel.

Even though gannets have a reputation for being greedy, they are not at all greedy and don't steal food from their rivals.

No, they would generally not make a good pet as they are not used to being tamed. They are quite loud which makes it difficult to keep in a house.

Gannets are pronounced as 'ga-nuhts'. They follow fishing boats and fishers who go fishing as they lead them to a site where there are lots of fish.

Gannets are not seagulls because there is no such thing as a 'seagull', because gulls do not exclusively live near the sea.

Do gannets mate for life?

Yes, the northern gannet species of gannets mate for life and stay in their nesting areas if one of the mates dies, then the other looks for a new mate.

How fast can a gannet dive catch fish?