17 Wing-tastic Facts About The Greater Sooty Owl For Kids 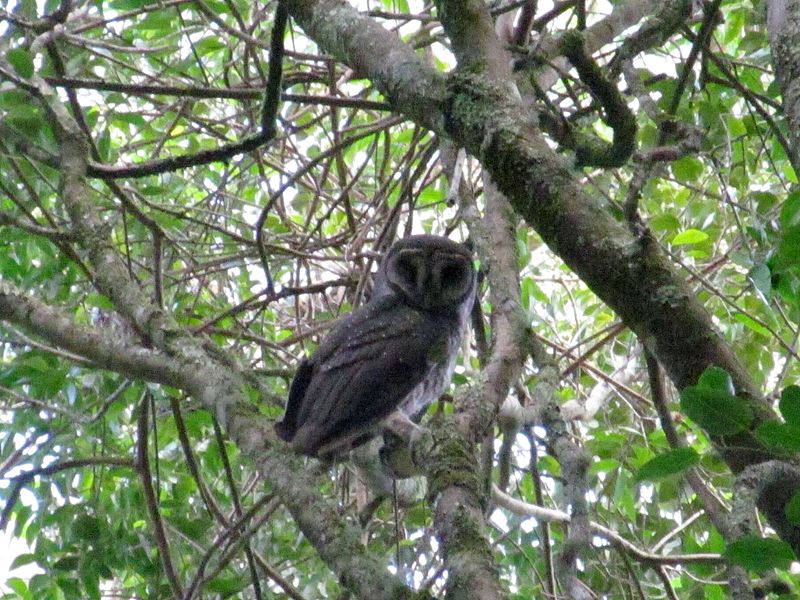 If all you have learned of owls is that they are nocturnal and the only species of owl you visualize is the common barn owl, then you'd love to learn about the greater sooty owl. This owl (Tyto tenebricosa) is a medium to large owl found in south-eastern parts of the Oceania countries (Australia and New Guinea). The greater sooty owl is sedentary and territorial throughout the year. Their call is a piercing shriek that can last up to two seconds and resembles the sound of a falling bomb whistle. Such is the beauty of nature that the male brings food to the female as gifts during the breeding season. If the female finds such advances acceptable, the birds copulate, and females lay dull white eggs. The sooty black color, after which the greater sooty owl (Tyto tenebricosa) is named, gets darker as they age. Their facial disk is black to dark gray, sooty black, or silver in color. They have a finely white-spotted head with scattered white spots on the wings. The upper part of this bird is dark gray or black; in contrast, it's under part is lighter. The females appear to have a lighter color than their male counterparts. Their legs are feathered, and they have a short tail. If you enjoy this article, check out these tawny owl facts and barn owl facts.

What type of animal is a greater sooty owl?

The greater sooty owl (Tyto tenebricosa) is a type of owl that is territorial and sedentary throughout the year.

What class of animal does a greater sooty owl belong to?

Greater sooty owl (Tyto tenebricosa) belongs to class Aves and has a shriek which can last about two seconds. The other species in their genus includes the barn owls as well.

How many greater sooty owls are there in the world?

The total global population of the greater sooty owl has not yet been reliably quantified. Considering it is listed as Least Concern in the IUCN(International Union for Conservation of Nature) Red List, it is fair to assume that their population has been relatively stable.

Where does a greater sooty owl live?

In terms of country-wise distribution, this owl is found exclusively in Oceania. These birds are found in south-eastern forests of Australia and can also be found in New Guinea's montane rainforests. In addition, they have also been found on Flinders Island. As for the lesser sooty owl, it is found in the wet tropics of North Queensland.

What is a greater sooty owl's habitat?

Within the montane rainforests, sooty owls prefer to be in moist eucalyptus trees, which have smooth-barked gums and understory of lily pilly and tree ferns. This preference for moist areas is not valid for when they hunt. The greater sooty owl is a bird that roosts and nests in tree hollows, dense foliage, and caves during the daytime. This behavior is explained by their famous nocturnal trait. They are mostly sedentary and do not migrate.

Who do greater sooty owls live with?

Found in large numbers in south-eastern Australia, sooty owls have been known to coexist with the powerful owl (Ninox strenua). They may still have conflicts over shared resources. Additionally, this species is known to be territorial in general.

How long does a greater sooty owl live?

The lifespan of greater sooty owls has not been ascertained with great certainty yet. On average, an owl lives about 10 years but can live up to 25 years in captivity. This may help define the range of the lifespan of these sooty owls.

The breeding season of the greater sooty owl (Tyto tenebricosa) is between January and June. While this range is quite wide, these owls might still breed outside the season, with records of eggs being laid in spring. As part of the courting ritual, the male greater sooty owl gets food to the female and becomes loud using a 'bomb whistle'-like call. If this gesture is appreciated by the female, the owls copulate. The nest of these sooty owls is in large hollow trees at heights of 32-164 ft (9.8-50 m). The female leaves sight of her eggs only during the night once they are laid. If the nests are in caves, the female rarely leaves the eggs, even during the night. The female owl lays one or two dull white eggs that take 42 days of patient incubation to hatch. These birds are territorial and sedentary throughout the year, thus spend most of their lives in the same area.

The greater sooty owl (Tyto tenebricosa) is listed as Least Concern in the IUCN (International Union for Conservation for Nature) Red List. Unlike the common barn owl, their distribution is limited to a very small part of the world; thus, despite not qualifying as a vulnerable species, these owls are pretty rare. In at least two Australian states (New South Wales and Victoria), the greater sooty is listed as vulnerable. The primary drivers of their endangerment are the loss of their habitat and climate change.

Tyto tenebricosa is a medium to large owl with a length of 14-17 in (35.6-43.2 cm), and its wing length is 14-16 in (35.6-40.6 cm). They have a facial disk that appears to be round and have large dark eyes. This facial disk is black to dark gray, sooty black, or silver in color with a distinct black edge. Their under part is lighter than the upper part, which is dark gray or black while. They have a finely white-spotted head with scattered white spots on the wings. To distinguish the two sexes on the basis of their color, note that females are lighter colored than males. The greater sooty has a short tail, and its legs are feathered.

These owls, with their large, dark eyes and scattered white spots, appear to be quite majestic and pleasing to the eyes.

These owls have a wide variety of combinations of shrieks, rasps, and screams. Their most common call is a piercing shriek which can last up to two seconds. Another unique call of theirs' resembles a falling bomb whistle.

How big is a greater sooty owl?

How fast can a greater sooty owl fly?

The exact speed of these sooty owls is not known. Owls, in general, though, have been known to reach modest speeds of 40 mph (64.37 kph). However, they are way slower than the peregrine falcon, which is considered to be the fastest bird in the world.

How much does a greater sooty owl weigh?

Males and females of the greater sooty do not have any unique names. Females are lighter colored than males.

What would you call a baby greater sooty owl?

A greater sooty baby can be called a chick. The term owlet is also used to refer to young owls, but the term is also used for a subset of species of owls that live in south-eastern parts of Asia. This may cause confusion in some cases.

The greater sooty owl (Tyto tenebricosa) is an apex predator. Their large dark eyes that are set in a large facial disk give them great vision. They use this vision to prey on sugar gliders, ringtail possums, and other mammals.

Much like almost every other owl or even bird, these sooty owls are not poisonous.

The idea of having a pet owl has been the dream of many, thanks to the Harry Potter franchise. However, this notion should be left in the realm of fiction. These owls are best left in their natural habitats among the dense foliage of smooth-barked gum trees and tree ferns.

The female greater sooty owl rarely leaves its nest during the 42 days of incubation.

How did the greater sooty owl get their name?

The greater sooty owls are named after their gray silver or sooty black color. The upper part of the bird is black or dark gray, which is paired with white-colored spots on its head and a round facial disk is a dark, gray silver, or sooty black. Being the larger of the two sooty owls, it gets to keep the name greater, while the smaller settles for the name lesser sooty owl.

While technically they are listed as Least Concern in the IUCN Red List, these birds are rare and need to be protected. In the Australian states of New South Wales and Victoria, the greater sooty owl is listed as vulnerable. The loss and changes in their habitat along with extreme weather cycles caused by global climate change have been the main reasons for the decline in their population.

Here at Kidadl, we have carefully created lots of interesting family-friendly animal facts for everyone to discover! For more relatable content, check out these anhinga facts and umbrellabird facts pages.

You can even occupy yourself at home by coloring in one of our free printable greater sooty owl coloring pages.