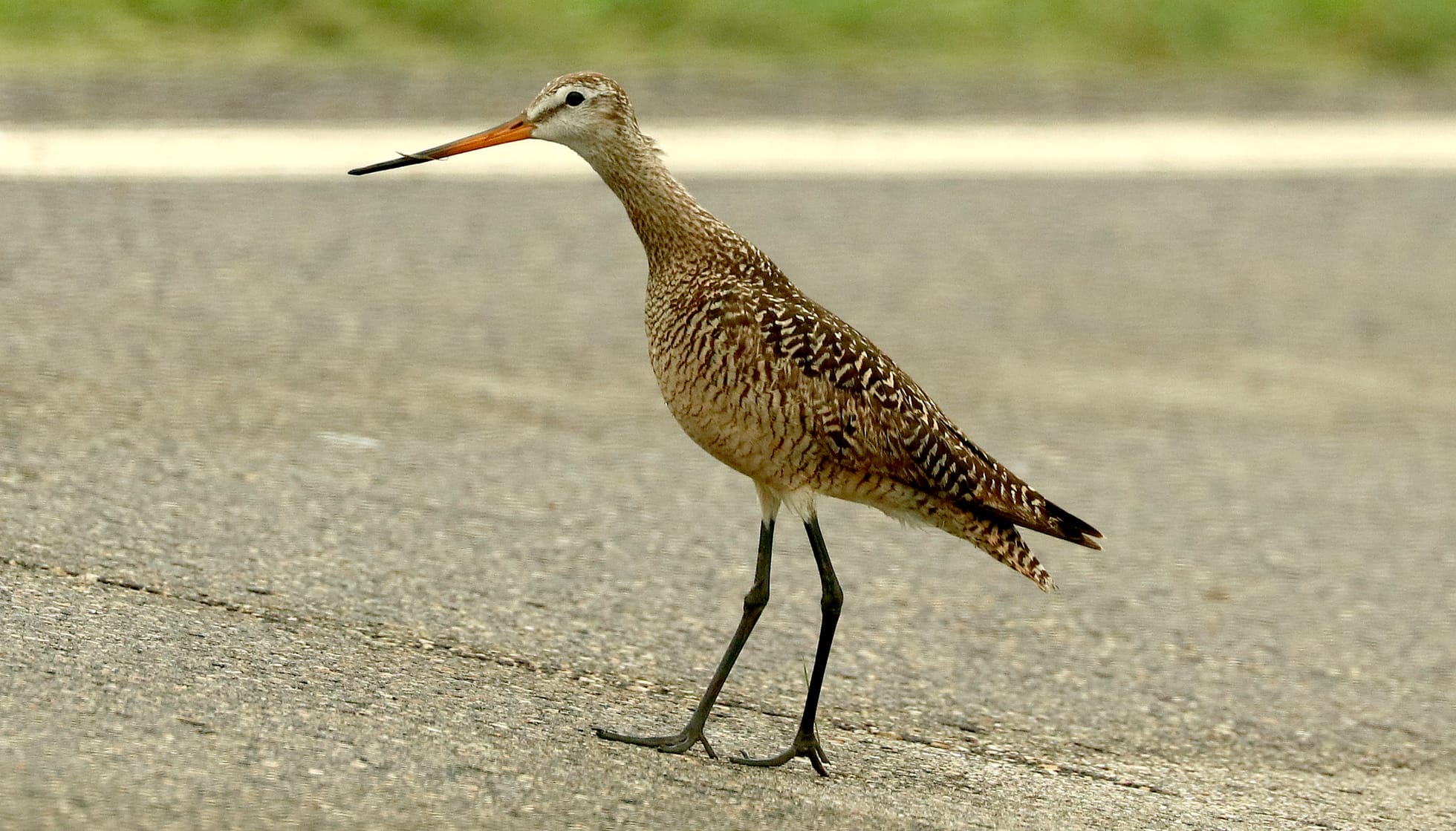 The marbled godwit (Limosa fedoa) is a large shorebird that is usually seen in large flocks in Western Mexico and southern California. These birds from order Charadriiformes, family Scolopacidae, and genus Limosa are also known to prefer habitats including wetlands and grasslands. Marbled godwits are one of the largest members amongst the other four species of godwits and are also amongst the most widely found creatures. These birds are carnivores and are known to form nests and lay up to five eggs every year. Godwits’ population is declining due to habitat loss, breeding ground loss, and hunting but it is not so much so as to be vulnerable. These birds feed on aquatic insects, snails, grasshoppers, small fish, and other aquatic creatures with help of their upturned bill.

Here are some interesting facts about the marbled godwit. Hereafter, do check our other articles on brant facts and northern shoveler facts.

What type of animal is a marbled godwit?

A marbled godwit (Limosa fedoa) is a large migratory shorebird usually found in wetlands and grasslands. It comes from the order Charadriiformes, family Scolopacidae, and genus Limosa. These birds spend their winters on the coast ranging from Virginia to California.

What class of animal does a marbled godwit belong to?

How many marbled godwits are there in the world?

Where does a marbled godwit live?

Their population has also seen a constant decline over the years due to habitat loss. Marbled godwits are known to prefer grasslands, flooded plains, and wetlands for breeding which have been destroyed due to various factors, and these birds are known to migrate to different areas in search of wetlands as alternate breeding grounds. These long-billed birds are found in a variety of areas including the shores of the United States, especially during the winters, from the Gulf of Mexico up to Alaska. They are also known to migrate to the northern Great Plains of the U.S. during the winters, and they are seen in the correal forests of Canada during the summers.

What is a marbled godwit's habitat?

Marbled godwits are large North American birds and the most widespread godwits found around the world. These birds are found in a variety of habitats, including temporary ponds, pastures, as well as hay fields. They are known to prefer grasslands and wetlands located in the northern prairies of Canada and the United States. The northern population of these birds from North America is also found in lowland meadows, bogs, coastal marshes, wet tundras, and savannas. They are also known to live in different habitats near freshwater lakes and ponds, including mudflats, shallow ponds, salty marshes, and sandy beaches.

Who do marbled godwits live with?

How long does a marbled godwit live?

Marbled godwits are known to migrate to different places in search of breeding grounds. Their preferred breeding grounds are the Great Plains of North America or shortgrass prairies near wetlands. This bird species tend to avoid prairies with taller vegetation for breeding. Native grass prairies with green needlegrass, western wheatgrass, and blue grama are preferred by them for nesting during the breeding season.

Both the males and females are known to form their nests in dry spots that have short grass around, and the males attract females, after which, if the female agrees, they mate during the breeding season. Marbled godwits lay three to five eggs in a depression on the ground lined with grass, and both parents take care of the eggs. Sometimes, the parents also add an arched canopy of grass over the nest for added protection.

Although, these birds were very common during the 1800s, their population has seen a decline over years due to habitat loss, loss of breeding ground, and overhunting, thereby necessitating conservation efforts. Marbled godwits have been protected under the US Migratory Bird Act but their population is almost intact and is in no particular danger of being extinct in the near future. Marbled godwits have been put under the category of Least Concern in the IUCN Red List. They have been found to have an abundant population and are considered to face no threat of extinction over the next few years thanks to dedicated conservation efforts.

These birds are unique, elegant-looking birds that are big and have really long legs and upturned bills. These birds are tawny brown in color and have tawny buff-colored feathers that are usually dark on the top, whereas the underwings are brown or cinnamon-colored. Their long legs are usually gray or blue-gray in color, and their bills or beaks have a bright pink or orange color. These birds, although they look the same throughout the year, their breasts and bellies have dark bearings, especially during the breeding season. Their rusty cinnamon color gives them a unique appearance compared to other birds.

These are really beautiful and cute birds with cinnamon underwings that are known to cause no harm or danger to humans.

Marbled godwits are known to interact and communicate with one another through calls and physical displays. They are known to make nasal sounds such as ‘ahk’; and ‘ah-ha’, which are used during mating selection and to show aggression towards their predators and other creatures. These birds are social creatures that live in large groups and are also known to make varied sounds to decrease aggression towards new members of the flock.

How big is a marbled godwit?

A marbled godwit is the largest member amongst the other four species of godwits. They are around 16.5-19 in (42-48cm) long. They have long legs and a wingspan of around 29-31 in (73-78cm). These North American birds are almost three times the size of a normal pigeon.

How fast can a marbled godwit fly?

Marbled godwits are the largest birds amongst the other four species of godwits and are also known for their speed and flight patterns, especially during migration. These birds are known for their flight patterns and skills that are fast, swift, and strong as well. During the flight, their cinnamon wings and feet that extend beyond the tail look absolutely majestic. Marbled godwits are also capable of walking and running really fast other than being really fast flyers.

How much does a marbled godwit weigh?

As we have already seen, these birds are the largest members amongst the godwits and are known to weigh around 10-16 oz (280-380g) when fully grown.

There are no sex-specific names given to male or female marbled godwits.

What would you call a baby marbled godwit?

They are called chicks.

The feeding habits of marbled godwits vary according to the season and their location. These birds are usually known to feed on annelid worms, earthworms, crabs, and other small insects and marine creatures during the winters, while they prefer leeches, small fish, aquatic plant tubers, and grasshoppers during the summer. They are known to hunt with the use of their bills that are known to even get under the mud and help them to catch their prey while moving around slowly.

No, marbled godwits are really peaceful and non aggressive species of birds that are not considered dangerous to humans. Although these birds are known to prey on a variety of creatures, these birds are not known to cause any harm or inflict any danger towards human beings.

These birds are not considered pets due to their migratory nature and habitat of wetlands and grasslands which is not possible to provide at home.

Marbled godwits are known to have economic importance, and they are also known to attract tourism.

These birds are also celebrated through Godwit days in which students and people are known to take lectures, field trips, and workshops relating to marbled godwits.

The male marbled godwit is known to take care of the eggs and nestlings till they know how to fly, while the females are known to fly away just a few days after the nestlings grow up.

These birds also have excellent swimming and foraging skills.

What is the difference between marbled godwit vs bar-tailed godwit?

What is the name of the bird that travels thousands of miles from New Zealand to Alaska?

Here at Kidadl, we have carefully created lots of interesting family-friendly animal facts for everyone to discover! Learn more about some other birds including Gila woodpecker facts or spotted sandpiper facts.

You can even occupy yourself at home by coloring in one of our free printable marbled godwit coloring pages.