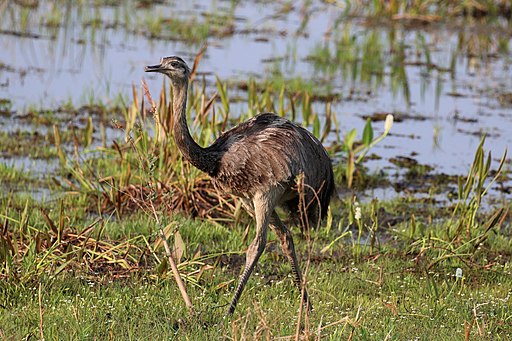 Rhea bird (Family rheidae) belongs to the category of flightless birds native to South America and distantly related to the Emu and the Ostrich. There are two widely recognized species of the rhea bird of the family rheidae: the rhea Americana or the greater rhea and The Darwin’s rhea or the Lesser Rhea. Rhea Bird is found in the eastern part of South America and Germany. Their average life span is 15 years. These flightless birds have grey brown plumage. They have long legs and long necks much like the ostriches. They have very large wings for flightless birds which spread while they run. The rhea bird has three toes. They have 18-22 plates in their Tarsus and store their urine in the expansion of the cloaca.

The rhea bird has a primarily vegetarian diet. It feeds on seeds, fruits and crops but is also known to feed on insects, scorpions, fish. The greater rhea swallows pebbles which help it grind food down which facilitates digestion. The male rhea is polygynous and the female rhea is polyandrous. Hence, in the mating season female rheas mate with a male, deposit their eggs and go over to another male. They breed in the warmer season hence they generally breed in the months between August and January. In North America their breeding season is from April to August (Though they are rarely found in North America). While they are quite isolated during mating seasons, they are very sociable during other times and generally live in packs 25-30 birds.

They are of great utility for their skin products. Their leather is of a great quality and their oil is used to make cosmetics and soaps.

This article include information such as rhea facts about their neck, rheas and humans, rhea nests, rhea's native habitat, and so on.

You may also check out the fact files on American flamingo and ostrich from Kidadl.

What type of animal is a rhea?

Rhea Americana (Genus rhea) is a type of flightless bird.

What class of animal does a rhea belong to?

Rhea Americana (Genus rhea) is a bird and belongs to the Aves class of kingdom Animalia.

How many rheas are there in the world?

An accurate count is not available.

Where does a rhea live?

Rhea Americana lives in savannas, scrub forests and grasslands of areas mostly near eastern South America. They are found in the states of Argentina, Brazil, Bolivia, Paraguay and Uruguay. Some population of the greater rheas is also found in Germany. Darwin’s rhea is found in Altiplano and Patagonia in South America.

What is a rhea's habitat?

Rhea Americana prefers a grassland or savanna with tall vegetation. They prefer low altitudes. Rheas are found mostly near the water in their breeding seasons.

Who do rheas live with?

Greater rheas live in packs of 20-25 birds. The Darwin’s rhea or the lower rhea lives in smaller packs than these.

How long does a rhea live?

The average lifespan of a rhea is approximately 10-15 years in the wild.

When it comes to reproduction, male rhea birds are simultaneously polygynous in nature, whereas female rhea birds are serially polyandrous in nature. This means that the males simultaneously mate with several females at a time. Females mate with one male at a time and then go on to another after reproduction. Rhea bird reproduction occurs in the winter months, when the male rhea birds become more and more aggressive in order to court females. Rhea birds mostly live in large flocks, which split up as the breeding season approaches. The flocks break into males, females and yearlings (one-year-olds).

Females move around during the breeding season, while male rheas are sedentary. They make nests and incubate the eggs.

With the onset of the breeding season, males start to aggressively court the females, by puffing their feathers and raising their front body. These silent and flightless birds start calling to the female and strutting alongside or in front of her. The male will also flap its wings, lower his head and move his neck in zig-zag motion. Once he has courted the female, copulation occurs in the nest of the male.

The eggs are laid by each female into the male’s nest. Since one male mates with several females at a time, he creates a harem and often gets some yearlings to help him take care of the eggs. One nest can contain anywhere between 25-80 eggs depending on the number of females and the eggs laid by each. The eggs of a rhea are about half the size of an ostrich’s egg. After approximately 30-45 days of incubation by the male rheas, the young hatchlings are born.

Rhea Americana, according to the IUCN, is considered a Near Threatened Species. Most of the Rhea Americana is in eastern South America.

Darwin’s rhea (rhea pennata) is considered a Least Concern Species. They are only confined to Altiplano and Patagonia of South America.

Greater rheas have declined due to increased hunting and the destruction of their habitat to make farmlands. Farmers consider greater rheas a threat as they feed on plants and crops such as cabbage and chard. Hence, greater rheas are considered as pests and farmers kill them to save their crops. South America has a widespread practice of burning crops which has led to a further decline in the greater rheas. Their health is also affected by the widespread use of pesticide and herbicide sprays on plants and crops which lead to food poisoning.

Now, trading rhea Americana is restricted as per CITES. The greater rheas in Germany are legally protected.

In April of 2015, The rheas of Germany were termed by the government as ‘potentially invasive’.

The natural predators of the rheas are cougar and jaguar. Feral dogs also may kill younger birds. Armadillos may feed on the rhea eggs. Rhea bird nest is also destroyed by armadillos. In some cases, even bush dogs, the tegu lizard and some birds have preyed on the rheas.

Greater rheas bred in the captive are very naïve towards ecology. They are very fearless and hence are highly vulnerable to predators if left in the wild. The greater rheas are trained by man-made programs to identify predators and save themselves.

The American rhea have large wings which are not used for flying, but to help them balance while running at fast speeds. The greater rheas of Argentina have leucistic appearance, with blue eyes and white feathers.

Rheas are odd-looking flightless birds that are rather aggressive in nature. They do not have a very pleasant appearance, and have a dull colored plumage. They cannot be called cute, as such, but the young rhea hatchlings/chicks are rather cute. They have a furry appearance and striped bodies which make them look endearing.

Rheas are mostly silent birds. Rhea bird call is a whistle-like sound, and often deep and booming when attracting their mates. Chicks and young rheas also make similar sounds. When faced by danger or chased by predators, rheas flee at great speeds in a zig-zig motion.

How big is a rhea?

Rhea size is the largest for any bird in South America. They are about half the size of an ostrich, and weigh about one third of the weight of an adult ostrich, which is the largest flightless bird known.

Can a rhea fly?

Rheas are flightless birds. They are a variety of ratites in the Rheiforme order. These South American native birds have no keels on their sternum bones and their large heavy bodies are not meant for flying.

They can, however, run at fast speeds and use their wings to balance when turning. Ratites are actually a category of flightless birds. Other ratite birds are emus, kiwis, ostriches and tinamous. Some ratites are even extinct, for example the elephant birds.

How much does a rhea weigh?

Both the species have the same name Rhea Americana

What would you call a baby rhea?

A baby rhea is called a chick.

The Rhea bird diet is omnivorous, and it is said that it eats almost anything available. The rhea eats insects such as earthworms, although its diet includes a variety of vegetation such as leaves, thorns, seeds, roots, plants and fruits. It is also known to eat layer pellets, ostrich compounds, alfalfa and waste produced in homes.

Rheas have sharp claws at the end of their wings, which can easily disembowel any human. However, they do not usually harm humans unless attacked, and their general tendency is to flee when encountered with danger or predators.

They are still rather large and aggressive birds that can attain very fast speeds. Their wild behavior can make them come off as dangerous.

No, rheas are birds of the wild and they have a very aggressive behavior, unfit to be tamed. Hence, a Rhea Bird Pet is not a good decision.

Rheas were hunted by early humans who resided in the Patagonian desert region. They are also farmed nowadays for poultry products such as meat and eggs. Rhea poultry farming is common in countries like Uruguay, Paraguay, Argentina, Brazil, Chile and Peru. However, leather from the skin of the naked rhea bird is also traded and its oil is used in the cosmetic industry.

The Darwin’s rhea (lesser rhea or rhea pennata) is still found in the Patagonian and Altiplano regions of South America.

Rheas are known to have strong and sharp claws at the ends of their large wings. These are used as weapons against predators. The males of this species are so aggressive that the females have to lay eggs near the nest and not in it. The eggs then roll into the nest.

Rhea bird is of two types - The Rhea Americana or the greater Rhea/ common Rhea/ Gray Rhea, and the Darwin’s Rhea (Rhea Pennata) or the lesser Rhea.

How fast can a rhea run?

Here at Kidadl, we have carefully created lots of interesting family-friendly animal facts for everyone to discover! For more relatable content, check out these red-footed booby facts and pitta bird facts pages.

You can even occupy yourself at home by coloring in one of our rhea bird coloring pages.