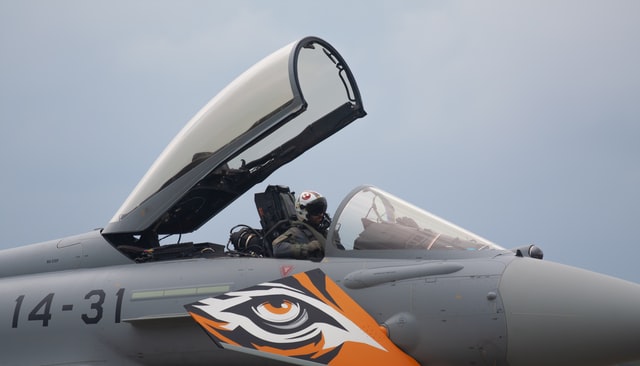 The Air Force is one of the most esteemed careers one can have in the United States.

A job in the air force has many different divisions. Pilots are just one part of a huge organization that is the air force department.

The current U.S. Air Force slogan is probably the most inspiring of all air force mottos: "Aim High", with the response "Fly-Fight-Win". It is both succinct and encouraging. An air force is of great importance to a nation's homeland security. So serving in the air force is a matter of immense national pride. An air force saying is a common way to celebrate one's recruitment or achievements in service to their country. Below are a few U.S. Air Force sayings to that end.

If you like what you read you could also take a look at funny military quotes and pilot quotes.

An air force recruit undergoes arduous training sessions in boot camp. Inspirational air force quotes work as encouraging words for soldiers. These quotes work both as military motivation before an operation, and military congratulations quotes after a successful one.

1. "The Navy can lose us the war, but only the Air Force can win it. The fighters are our salvation, but the bombers alone provide the means of victory."

2. "A terrorist is someone who has a bomb, but doesn't have an air force."

3. “If our Air Forces are never used, they have achieved their finest goal.”

5. "Only air power can defeat air power. The actual elimination or even stalemating of an attacking air force can be achieved only by a superior air force."

7. "A modern, autonomous, and thoroughly trained Air Force in being at all times will not alone be sufficient, but without it, there can be no national security."

8. "Not to have an adequate air force in the present state of the world is to compromise the foundations of national freedom and independence."

9. "Our warriors are no longer limited to the people who fly the airplanes...Our entire force is a warrior force. Being a warrior is not an AFSC, ...it is a condition of the heart."

10. "Those who served, and those who continue to serve in the Army, Navy, Air Force, Marines, and Coast Guard took an oath to uphold and protect the Constitution against all enemies foreign and domestic, and we can never forget the importance of their commitment to our Nation."

Inspirational Quotes For Military Personnel In The Air Force

These are quotes primarily for pilots joining the military - quotes that they could imprint on their dog tag. These could also serve as motivational quotes for military training, as well as proud air force mom quotes fo parents of brave air force personnel.

12. “When everything seems to be against you, remember that an airplane takes off against the wind, not with it.”

13. “...it was more American on an air force base in Crete than it was in Times Square.”

14. "For it has been said, all that a man hath will he give for his life; and while all contribute of their substance the soldier puts his life at stake, and often yields it up in his country's cause. The highest merit, then is due to the soldier."

16. "It is the pride of my heart to have been one of the earliest adopted sons of America."

17. "And then, when I thought about joining the Air Force, flying seemed like a natural extension of the motorcycling experience."

18. "These fallen heroes represent the character of a nation who has a long history of patriotism and honor - and a nation who has fought many battles to keep our country free from threats of terror."

19. "America without her Soldiers would be like God without His angels."

20. "The Coast Guard has long been known as the armed service that gets more done for less."

21. "As a former Airman First Class in the United States Air Force, like many veterans in America, my military experience played an important part in instilling in me a sense of character and discipline that has served me throughout my life."

22. "The thing about the Air Force or any branch of the military is that all of us were plucked away from our homes and our comfort zones and our families. So there was a solidarity in the military, a brotherhood."

23. "I can still remember them wheeling the black and white TV sets into our classroom at school so we could watch the men landing on the Moon, and that obviously had a huge impact. I later found out those people flying Apollo were ex-military test pilots, so I decided to join the Air Force and become a test pilot."

24. “The greater the difficulty, the more glory in surmounting it. Skillful pilots gain their reputation from storms and tempests. ”

25. “A couple dozen solo flights are better than having never done it at all.”

26. "My free drift Halts not particularly, but moves itself In a wide sea of wax; no leveled malice Infects one comma in the course I hold, But flies an eagle flight, bold and forth on, Leaving no tract behind."

27. "Man must rise above the Earth—to the top of the atmosphere and beyond—for only thus will he fully understand the world in which he lives."

28. "The desire to fly is an idea handed down to us by our ancestors who, in their grueling travels across trackless lands in prehistoric times, looked enviously on the birds soaring freely through space, at full speed, above all obstacles, on the infinite highway of the air."

29. “Aviation is proof that given the will, we have the capacity to achieve the impossible."

30. "The airplane has unveiled for us the true face of the earth."

31. "Fighter pilots have ice in their veins. They don’t have emotions. They think, anticipate. "

32. "Pilots are a rare kind of human. They leave the ordinary surface of the word, to purify their soul in the sky, and they come down to earth, only after receiving the communion of the infinite."

33. "There’s a big difference between a pilot and an aviator. One is a technician, the other is an artist in love with flight."

35. "Don’t ever let a fear of failing keep you from knowing the joys of flight."

36. "He who would learn to fly one day must first learn to stand and walk and run and climb and dance; one cannot fly into flying."

37. “I think it is a pity to lose the romantic side of flying and simply to accept it as a common means of transport.”

38. "Sometimes you have to go up really high to see how small you are."

39. "Once you have tasted flight, you will forever walk the earth with your eyes turned skywards."

40. “The moment you doubt whether you can fly, you cease forever to be able to do it.”

Here at Kidadl, we have carefully created lots of interesting family-friendly quotes for everyone to enjoy! If you liked our suggestions for air force quotes then why not take a look at Patriotic quotes, or Strong Man quotes.