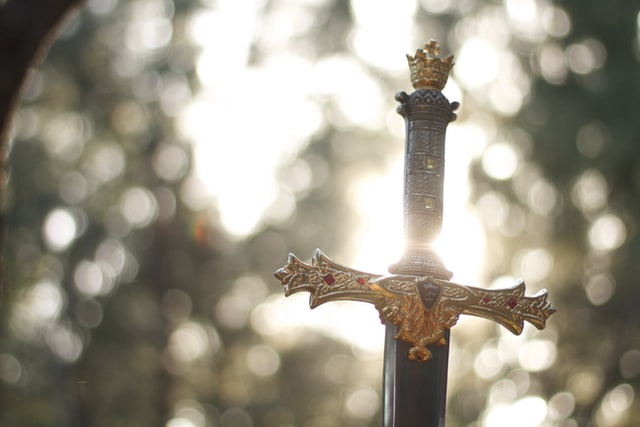 When George R. R. Martin wrote the novel series 'A Song Of Ice And Fire', little did he knew he would create a huge fan following around the world!

Some of the most loved characters from the story include Jon Snow, Daenerys Targaryen and Bran Stark, but we shouldn't forget the cool swords that also appear in the books and the hugely popular TV series which followed.

Some of the most notable swords used in the book and TV show are Ned Stark's sword called Ice, and Needle, which was Arya's sword, but many more mythical swords appeared in the show too. We have the ultimate list of 'Game Of Thrones' sword names from the TV show and the books for you to enjoy, right here on Kidadl!

Below we have listed the names of the wooden swords that appeared on the 'GoT' TV show that are known for their sleek design, cutting ability and durability.

1. Syrio's Wooden Practice Sword, was used by master sword-fighter and instructor Syrio Forel to train Arya Stark, one of the children of House Stark.

2. The Two Brothers Sword, was the wooden weapon designed and made by Ryon Forrester. The sword is described in the book 'The Ancient Sword: The Two Brothers', by author  Vincent Alexander K Buchan. The book's story is about two brothers who are at war after the death of the King of Aridion. The story is of a man fight against his brother who is hungry for power and possessions.

Most of the characters like Tywin Lannister, Ned Stark, Brienne of Tarth, Jaime Lannister and Ser Jeor Mormont had a sword, which they all named. So, why don't you check out some of the cool sword names from the show and use them as the name for your very own game prop?

3. Dawn, is the sword belonging to House Dayne, and its bearer is called 'Sword of the Morning'. The sword is a famous ancestral sword. In the 'Game Of Thrones' fantasy drama television series, the sword was returned by Lord Eddard Stark to the Starfall after the crowning ceremony of Robert Baratheon.

4. Forrester Greatsword, is a weapon of the Lords of House Forrester. It is the best sword in 'Game Of Thrones'. The sword is very valuable and is greatly desired to be owned by the Lords of the Houses.

5. Hearteater, was the name of the sword used by Joffrey Baratheon during the Battle of the Blackwater. The sword is replaced by the lost lion's tooth. The design of the sword depicts a heart shape with a ruby cut placed between the jaws of a lion.

6. Lightbringer, is Stannis Baratheon's sword. The all-seeing sage or the Red Priestess, Melisandre, suggested Baratheon create the sword by burning statues of the Seven.

7. Lion’s Tooth, was Prince Joffrey Baratheon's sword, he is the eldest son of King Robert Baratheon and Queen Cersei Lannister. The name of the sword was inspired by a lion, also known as the sigil of House Lannister.

9. Brightroar, is made of Valyrian steel and is the ancestral weapon of House Lannister. This great sword belonged to Tommen II Lannister who lost it on his expedition to the ruins of Valyria.

10. Dark Sister, was the name of the Valyrian steel sword of Visenya Targaryen, the wife of Aegon the Conqueror.

11. Dragonglass Weaponry, is considered one of the strongest weapons on the 'Game Of Thrones' TV show as this is the only weapon that can kill white walkers.

12. Heartsbane, is a 500-year-old ancestral Valyrian steel sword that belonged to the members of the House Tarly. The sword was given to Ser Jorah Mormont by Sam Tarly after his father and brother were killed by Daenerys Targaryen when they refused to bend the knee.

13. Ice Sword, was an heirloom greatsword of House Ned Stark and made from Valyrian steel. This weapon has been in the House Stark for generations and has always been passed onto the next generation until it was melted on the order of Tywin Lannister after he ordered the Ned Stark's execution.

14. Lady Forlorn, is the Valyrian ancestral sword that belonged to House Corbray.  The sword is made up of Valyrian steel and is passed from one Lord to the next Lord as a tradition.

15. Longclaw, is a Valyrian ancestral weapon that has been in the House Mormont for five centuries. Before his death, Ser Jeor Mormont gave his sword to Jon Snow. The sword is heavier than the other swords in the 'Game Of Thrones' and its tip is deadly pointed.  The sword is the mother of other swords.

16. Needle, was a small rapier made by a blacksmith of Winterfell and made from Valyrian steel. The needle was presented to Arya Stark by her step-brother Jon Snow before he was sent to become a member of the Night's Watch.

17. Nightfall, this sword belongs to Dalton Greyjoy after he took it from a dead corsair. This sword is made from Valyrian steel. This originally belonged to House Harlaw and was later on acquired by the Greyjoys. However, it is still unknown how the sword reached to the House Harlaw.

18. Oathkeeper, is one of two Valyrian steel longswords made from Ned Stark's greatswords on the orders of Lord Tywin Lannister. This sword was wielded by Jaime Lannister. Later on, in the book and TV show, he gave the sword to Brienne of Tarth as a present when he knighted her, as a parting gift.

19. Valyrian Steel Dagger, belonged to Petyr Baelish. This was the same weapon that was used to kill Bran Stark, later on, used to kill Ned Stark by Baelish himself and finally, Arya used it to kill Baelish.

20. Widow's Wail, was a sword made from ice, it is the ancestral sword of Ned Stark. It was also given as a wedding gift presented to Joffrey. Later on, the sword was wielded by Jaime Lannister after the death of his son Joffrey. This is a good and powerful name for a sword.

Kidadl has lots of great name articles to inspire you. If you liked our suggestions for all of the 'Game Of Thrones' sword names from the TV show and books, then why not take a look at something different like this list of all of the Samurai sword names and types or these famous and historical sword names?