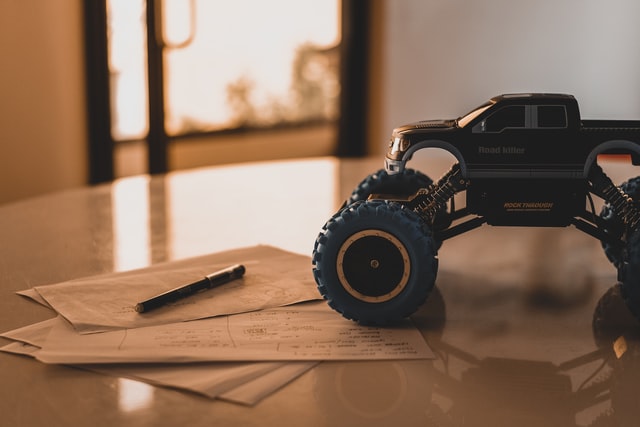 A monster truck is a specially designed truck with elements such as humongous tires, high performance suspension and four wheel steering.

With the growing popularity of famous monster trucks, everyone is looking for monster truck themed names. After all, your monster trucks (the fastest of which can reach speeds of up to 99 mph!) deserve the best names.

What is better than finding the perfect monster truck inspired name? The joy of coming up with perfect monster truck inspired names will give you such a cool sense of achievement. Many monster trucks almost have a personality of their own and their names should match this.The best way to decide on a name is to keep their unique quirky feature in mind. Monster truck names might be inspired by mythic creatures or from unforgettable events in history. Are you looking for some quirky, crazy and cool name ideas for your favorite vehicle (or toy vehicle!)? You have come to the right place. Here is a cool list of monster trucks' names that will leave a smile on your face.

For more car names, you can also check out our articles full of the best truck names and black car names.

Monster Trucks all eventually get retired at some point. The reasons for retirement can be varied, such as negligible merchandise sales, unavailability of drivers, serious crashes or becoming out of date like '80s monster trucks. Just because they are old monster trucks, they are not forgotten in our list!

1. Backwards Bob - The name was given to a modified Ford F-150 truck . It was created by FELD Entertainment & Live Nation. Backwards Bob entered the Monster Jam World Finals 9 Encore driven by Mike Wine. Its body was from Blue Thunder previously driven by Tony Farrell.

2. Bigfoot 9 - This popular name was given to the truck created by Bigfoot 4X4 in the year 1990. It is a Ford monster truck. Originally, this truck was meant to be the sister truck of Bigfoot 8 with minimal upgrades.

3. Grave Digger The Legend - This name was given to a tailor-made Ford Panel truck which was driven by Adam Anderson. Adam participated with this truck at six Monster Jam World Finals between 2011 and 2015. He even won the racing championships in the years 2013 and 2014. It is a popular Hot Wheel monster trucks model as well. Grave Digger is the most famous monster truck!

For children of the '80s, Speak & Spell, Cookie Crisp cereal, Dukes of Hazzard, the Trapper and Bigfoot and co. were all major elements of pop culture. These scary names are a tribute to these popular elements and more. Check out our list below and pick the best name for your very own monster truck (whether it is a full sized truck or a toy!). You can also be inspired by names like Doctor Octopus, which was the name of the octopus monster truck from the Marvel Monster Trucks live show in 2012.

5. El Toro Loco - This is the name of a truck driven by Lupe Soza. It was made in the year 2001, taking inspiration from the Jurassic Attack’s horns theme. Similar to Jurassic Attack, the eccentric El Toro Loco’s body was popular with kids, however, El Toro Loco was never a good performer in racing contests. El Toro Loco was however able to hold its own in the freestyle niche, carrying out impressive stunts like landing on a cargo container top and performing a corkscrew flip off from an RV. While El Toro Loco never shined in the races, El Toro Loco produced one of the top 10 best loved merchandise franchises of the Monster Jam series. More than four El Toro Loco trucks have been created with the latest one sporting a Carroll Racing Development body. Becky McDonough is another driver who drives an El Toro Loco.

6.  Mohawk Warrior - This is undoubtedly the coolest monster truck name! This is the name of the truck driven by George Balhan. The truck’s design takes its cues from the Cadillac Escalade. Its name often featured in most people's lists of their favorite monster trucks. This very distinct looking truck first showed itself at the Monster Jam Finals of 2010 at Las Vegas and is one of the best monster trucks out there.

7.  Maximum Destruction - Maximum Destruction is the name given to a modern SUV style truck that is popularly known as Max-D. It is currently owned by Tom Meents. Initially, it was known as Goldberg, prior to becoming Team Meents and then the Maximum Destruction name followed. Its popularity in the Monster Jam series knows no bounds, because of its capability to live up to its name.  This is especially true when the creator Meents is driving it. Its race against the Grave Digger is always a serious crowd puller. While the drivers of the two cars are friends, their monster trucks have been rivals for a long time in the monster truck world.

While monster truck racing may have begun as a friendly competition between friends with a liking for eccentric trucks, it has since grown into a billion dollar industry with fans everywhere. There are plenty of monster trucks now with memorable titles. The following trucks have made a name for themselves in the sport and have captured the imagination of many monster trucks fans. They are some of the best names around, so make sure you take a look at this list of monster trucks' names below before you settle on a name for your beloved monster truck.

8. Predator - The name of the monster truck driven by Allen Pezo. It was originally known as Lone Eagle when it was created from a 1984 Chevy Silverado. Lone Eagle became the Predator after a makeover in 1988. Allen went on to create many more trucks called Predator during the '90s and 2000s. A panther's eyes and body are the hallmarks of the Predator truck.

10. Bulldozer - The name of a monster truck famous for its gigantic bull horns on its roof. Bulldozer became popular as a promotional truck when it was created in 1997. As it became more popular, Bulldozer began to compete full time in larger competitions.

11. Swamp Thing - The name of the monster truck driven by Tony Dixon, one of the European monster truck drivers who participates Monster Jam contests. Dixon supposedly zeroed in on the name during a trip to the Everglades in Florida, a swampy region.

12. Alien Invasion - The name of a tailor made monster truck from FELD Entertainment driven by Bernard Lyght. It debuted at the Atlanta show on 5 March 2016.

13. Avenger - The name given to the monster truck based on the Chevy Bel Air 1957 model. The Avenger monster truck is driven by Jim Koehler and is Team Scream racing camp’s flagship truck. It is popular for its unique chassis.

14. AXE - The name of the monster truck operated by Team Scream since 2017. Its design was inspired by a combination of the fire truck and a 1941 Willys Coupe. It is currently driven by Kyle Garr and Chris Koehler.

15. Bad News Travels Fast - Is the name given to a Chevy Silverado truck currently driven by Brandon Derrow from Virginia. Bruce Haney from Florida drove this truck for a decade.

16. Bakugan Dragonoid - The name of the monster truck which debuted in the Monster Jam Stadium Championship Series 1 of 2019. Its name is based on a character from the Bakugan franchise. It is currently piloted by Camden Murphy.

17. Big Kahuna - The name of a tailor-made Ford Woody truck driven by Shane England. It debuted as another part of Shane’s Kahuna Motorsports team in 2013.

Here are some new name ideas you can use for your monster truck, these names are not taken by other trucks yet. All monster trucks need a great name, and this list is here to inspire you!

18. Beast - because your monster truck is a beast.

19. Black Magic - for a monster truck that can mesmerize crowds.

20. Cannonball - a cool name for a monster truck.

21. Dark Knight - one of the best names for a black monster truck.

22. Gears - an appropriate name for a fast monster truck.

23. Iron Giant - the perfect name for your giant monster truck.

24. Mammoth - because your monster truck is a mammoth car.

The names of trucks expected to participate in the Monster Jam 2020 can be found here. You might recognise some of these names from earlier on in our list!

Kidadl has lots of great names articles to inspire you. If you liked our suggestions for monster truck names, then why not take a look at something different like these funny food truck names or these funny car names?