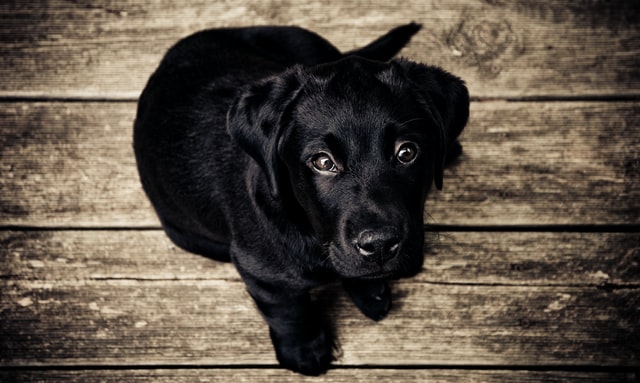 There are a lot of name ideas for a cute lab puppy with a black coat.

Be it a female black lab or a male black lab, choosing the perfect name always turn out to be a struggle. But a handy list of all the black lab names can really be of great help for you.

Labrador is a popular dog breed amongst most of the other dogs.  Black Labradors are not just popular but are beautiful looking creatures, known for their friendly approach, loyalty and are also considered as an adorable companion by most. With so many features as an inspiration, searching for a perfect labrador name for your labrador retriever shouldn't be a huge problem. Names like Ace, Arya, Barney, Bailey are a few examples of male and female black dog names. Apart from these, there is a whole section of cool and funny dog names that include Dash, Harper, Mocha, Golden, and more. Check the lists below to get the best Labrador names option for awesome dark labs.

If you are looking for more dog names, you can check out our other articles on Chocolate Lab Names and Names for Black Dogs.

Male black lab names commonly give the labrador names an inclination towards the color of your pet buddy. Here's a list of few labrador dog names for your black lab puppy or dog.

2. Adelram (German origin) meaning "dark and noble"; beautiful name for a pet likely to experience a happy welcome from.

4. Anino - Meaning "shadow"; is quite a rare but catchy name for a smokey lab.

7. Bran (Welsh origin) meaning "raven,"; is recently quite popular a name after the 'Game of Thrones' series and can be a perfect name for your labrador retriever.

14. Dell - Meaning "shade"; is quite an enticing unisex name, perfect for the furry rebel.

18. Dougal (Scottish origin) meaning "dark stranger"; one of the names for your newly bought, adopted stranger soon to turn a family member.

20. Eban (Hebrew origin) meaning "the black stone of help"; is a creative and really ancient name.

24. Kaval (Indian origin) meaning "black-toned"; is a unisex name and can be used for a male as well as a female dog.

27. Kenneth (English origin) meaning "handsome one"; is a perfect name for your handsome labrador retriever.

32. Lonan (Irish, Gaelic origin) meaning "blackbird"; can sound like a name with magic.

36. Musta - Meaning "black"; is one of the unique names for black dogs.

43. Pinchas (Hebrew origin) meaning "dark-skinned, serpent"; for the pet who has a deadly look.

50. Tynan (Irish origin) meaning "dark"; is quite a pick for the little furry friend.

51. Yin (Chinese origin) meaning "in the shade"; is one of the catchy names for your dark, ash-color dogs.

Labrador names like; Daisy, Hazel, Lola have almost filled all the sites for name searches. Here are a few female black lab names that have different meanings and are trending on the website as favorites too.

54. Brena - Meaning "raven hair"; is one of the attractive female labrador dog names.

55. Bruna (Portuguese origin) "brown one or the dark-haired one"; is one of the cute brown-black lab female names.

59. Darcie (Irish origin) meaning "the dark one"; is one of the black lab names that give a sense of ancient touch.

60. Delano - Meaning "dark"; is a unisex name that can be used for a male or female black lab.

63. Juliet (English origin) meaning "youthful, soft-haired"; is quite a sunny name for your lab popular amongst girls after 'Romeo and Juliet'.

64. Kalama (Hawaiian origin) meaning "torch"; is one of the cute name suggestions to keep for the torch of your life.

69. Li (Chinese origin) meaning "black, pretty, powerful"; is a unisex name and has a modern touch to make up for black lab names.

70. Lila (Arabic origin) meaning "woman of the night"; is a feminine name perfect for your household charm who looks like midnight.

73. Maura (Irish origin) meaning "the sea"; is considered a variation of Mary and can be one of the captivating girl lab names.

74. Meilani (American origin) meaning "mayflower"; another cute name for the important blossom of your family.

77. Moriti - Meaning "shadow"; is a nice name for your smokey colored labrador retriever.

79. Naeva - Meaning "born at night"; is a trendy dog name for your first of the little friends.

82. Nyx (Greek origin) meaning "of the night"; is an edgy name for a labrador dog.

83. Olivia - Meaning "olive"; is a cute dog name and a perfect fit for black lab names.

84. Onyx (English origin) meaning "black gemstone"; is a unisex name, perfect for your gem of a dog.

86. Raven - Meaning "dark bird"; is a great name for your loving little puppy.

90. Tempeste (French origin) meaning "storm or stormy"; one of the personality-based female names for a lab.

91. Uliana (Russian origin) meaning "youthful, soft-haired"; is a variation of the name Juliet.

93. Ziba (Biblical origin) meaning "strength"; this name also means gorgeous and can be the right choice for your stunning and robust labrador retriever.

A Labrador retriever name that is popular, cool, or funny can top the choices list for all dog lovers. Here is a list of black lab names for your puppy that you shouldn't skip.

97. Dakota (Siouan word) (M/F) Meaning "friendly"; is a name made famous by the actor Dakota Fanning. What better than using this as a moniker for your cute dog pet.

101. Jackson (M) - Meaning "son of Jack" is a popular name after Jackson Pollock and has been taken by many owners for their pets.

104. Luna (F) (Latin origin) meaning "moon"; is one of the cool and popular names for a Labrador retriever.

107. Phantom - (M) Meaning "something elusive"; is one of the trending names for Labrador retrievers.

108. Sadie - (F) Meaning "princess"; is quite a common name for dogs used by owners for different breeds.

Kidadl has lots of great names articles to inspire you. If you liked our suggestions for Black Lab Names then why not take a look at Bernese Mountain Dog Names, or for something different take a look at Names That Mean Friend.