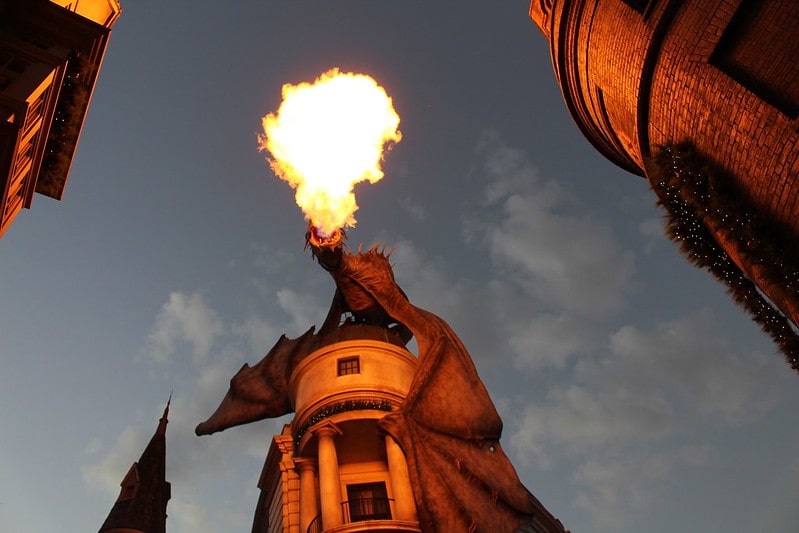 Ancient mythologies around the world are replete with stories of mighty dragons, and Blue Dragons hold a unique, otherworldly charm that one cannot ignore.

Dragons are an integral part of legends and folklore of several cultures. Although their depiction varies greatly across western and eastern cultures, dragons are portrayed as four-legged, scaly, horned creatures with majestic wings that could breathe fire.

According to the earliest mythological records, particularly in Indo-European civilizations, draconic creatures are likened to reptilian creatures like snakes and serpents. In eastern cultures, dragons were symbolic of wisdom, power, valor, and good fortune. In fact, many deities of eastern cultures had dragons as their companions. However, in western cultures, dragons were evil monsters with malicious intentions. These dragons usually resided in haunted caves, dark dungeons, enchanted forests, and ocean bottoms.

Blue Dragons, or storm dragons, were draconic creatures known for their manipulative nature. They had mastered the art of hallucination and enjoyed the infamous reputation of being tricksters that would manipulate desert travelers to drink sand and also derail them from their path into massive expanses of dust.

Blue Dragons had a unique physical appearance, different from the black dragon. Unlike the Black Dragon with prominent skulls, Blue Dragons had a horn on their head. They had large frills around their ears and a thick, horned tail. Their wings were enormous and scaly with talon-like structures at the ends.

We've created a long list of mystical Blue Dragon names for boys and girls and also gender-neutral names of dragons for your characters. A name for dragon has a powerful tone to it that brings out the fearsome respect that dragon or dragon lore inspires in us. You can also select DND dragon names or name your World of Warcraft (WOW) characters, using this list.

If you're looking for names meaning blue, take a look here. And for more fantastical names, take a look at these magical boy names.

These male names for dragons present a unique combination of mystery and magic. The mere mention of their names can strike fear in our hearts.

1.Azazel (Abrahamic Origin), meaning a fallen angel. The name Azazel was mentioned in the Book of Enoch.

2.Arden (English Origin), meaning the Lord of the Dark.

3.Egarron (Greek Origin), meaning one who is voiceless and gentile.

5.Heldras, meaning champion of the seas.

8.Mysom (European Origin), meaning the protector and caretaker of the weak.

9.Pavairreth (Hebrew Origin), meaning one who is mysterious with supernatural abilities.

13.Varo (Spanish Origin), meaning one who is valorous and chivalrous.

17.Duzyr (Polish Origin), referring to a valiant and strong-hearted creature.

20.Ieva (Hebrew Origin), meaning a being who can transcend death to remain forever eternal.

21.Idrizraele (Dungeons and Dragons), meaning a female dragon who ruled the Morueme lair in the Nether Mountains.

22.Sendrix (German Origin), meaning one who is tender and kind.

23.Nyx (Greek Origin), meaning the mythological goddess of the night.

24.Niggurath, meaning a black goat with a thousand heads. The name of a fictional deity created by the famous American horror fiction author, H.P. Lovecraft.

25.Orsel (Latin Origin), meaning one who breathes an Eternal Fire.

26.Uvnoas, referring to the Lady of Ice.

28.Zendryphaen, denoting one who is the Protector Of Life.

29.Zuvreir (Arabic Origin), meaning a wise and powerful being.

Below are a few gender-neutral cool dragon names that can fit well with anyone, irrespective of their gender.

30.Chezzaran (Dungeons and Dragons), meaning a flying beast that dwelled in the ruins of Ascore.

31.Deghain, denoting the creator of life.

33.Iymrith (Dungeons and Dragons), a giant serpent who leads and protects an army.

34.Meondren, denoting the gifted one who can transform humankind.

35.Ormypheus (Greek Origin), meaning the all-powerful ruler of the Land.

36.Qersirth, referring to a braveheart who is never afraid of challenges.

37.Qavyn, meaning the redeemer of humankind.

38.Stormfly, this is the name of the blue dragon in the hugely popular How To Train Your Dragon franchise.

39.Tyssanton, meaning the nurturer and protector of all living creatures.

40.Vuma (African Origin), meaning the ruler of the endless skies.

41.Xevoa (African Origin), meaning the swift and crafty one.

42.Xulberig, meaning a creature with a dark heart.

Kidadl has lots of great names articles to inspire you. If you liked our suggestions for Blue Dragon Names then take a look at Magical Girls Names, or for something different, Star Wars Girl Names.