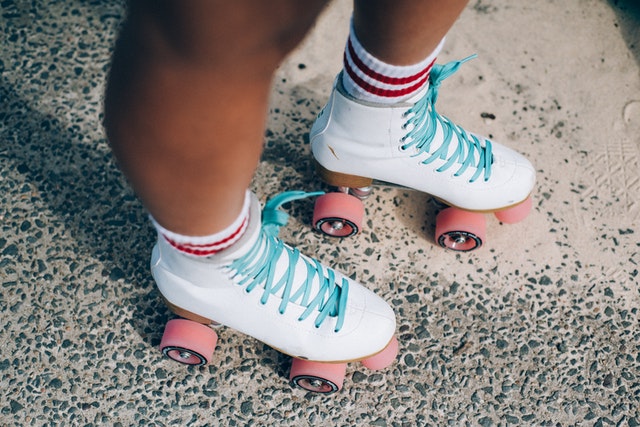 Most roller derby players assume an alternate identity or 'roller derby name' to carve a niche of their own in the sport.

Roller derby is a contact sport that revolves around speed, bravery and teamwork. It's very exciting to watch and it's become increasingly popular over the last few years, so we've collated a list of our favourite roller derby names.

So, if you are a tough cookie who loves hard hitting and edgy skate names, or you have a need for speed, then roller derby is perfect for you! Whether you're looking to start a new team or find a new identity, we have the perfect roller derby names for you on this list.

If you're looking for more sports names inspiration why not try these fantasy basketball team names or these baseball baby names right here on Kidadl?

1 . Nutcracker, a roller derby name after the famous ballet.

2 . Deathrow Roller, this roller derby name is inspired by the City of Hull Roller Derby.

3 . Red Hot Rock n Roller, we like this roller derby name, inspired by a country dance from Texas.

6 . Spandex Spoiler, this roller derby name is a play on the material of superhero suits.

7 . Black Death, because you'll hit your opposition like the plague.

10 . Chaotic Neutral, from one of the famous 'Dungeons And Dragons' characters.

11 . Hurt Rolls, is another tweaked name for this brutal roller game.

15 .  Alice in Wounderhland, because who hasn't read 'Alice In Wonderland'?

16 . Rusty Nails, this roller derby name is one of the most hardcore skate names.

17 . Coco-Name Carnage, is a twisted name, perfect to be given to a girl gang of roller derby experts.

18 . Meanhattan, a play on the place name, Manhattan.

19 . Smash Skater, is a punny name, inspired by a skateboard shop in the UK.

21 . Infernal Myrtle, denotes the name of a mythical creature.

22 . Zack Lunch, is a punny name, inspired by the bestselling book by Margie Palatini.

23 . Crazy Skates, for a roller derby team who are crazy about the sport.

What are roller derby players actually called? They are called jammers and blockers (these are the names of the two main positions in the game). Roller derby rules both strength and speed, with all skaters having a great athletic ability. Skaters who wear Steel Wheels skates are likely to go faster than any other players as these are the best skates to play with. Here are some cool and some vintage roller derby names that are popular right now.

26 . Daisy Unchained, this skate name is from California.

27 .  Arya Snark, inspired by the famous character in 'Game Of Thrones'.

28 . A Boy Named Sue, is a word play on the famous song by Johnny Cash.

31 . Audrey Deathburn, is a very punny name, from the name of the famous actress Audrey Hepburn.

34 . Mad Mommy, is the best name for a mother’s roller derby name.

35 . Strawberry Jam, this sweet tasting recipe name, is great for teams that are super sweet on the outside but are lethal on the court.

36 . Sir Skates-A-Lot, is an Irish derby team name, popular currently in the USA.

37 . Max Penalty, is a clever word play name for the brutal yet exciting roller derby game.

38 . Gate Crashers, is a derby gang  from the northern part of the UK.

39 . Derby Demons, is a derby gang from central Nevada.

41 . Scorched Skaters, is one of the best roller derby names from the USA.

42 . Hurtful Hooligans, is a twisted name, taken from the original word ‘Hooligans’.

44 . Wikibleedia, is a funny punny name after the world famous website Wikipedia.

47 . Grim Reaper, is one of the scriest skate names from the USA.

48 . Squid Skate Squad, is a popular derby name from the USA.

49 . Rioting Rollers, is a derby name that has created mayhem in the UK.

50 . Skate Splatter, is one of the best skate names, it is very common in Arizona.

The roller derby sport gives their player some really cool names that can reflect their height, the music they like, their hair color or even their personality, as well as how they play on the court! Here are some cool roller derby names inspired by popular culture.

53 . Sherlock Bones, is a punny name from the name of famous detective Sherlock Holmes.

55 . Naomi Cannibal, is a punny name, from the name of famous model, Naomi Campbell.

57 . Crabby Crustaceans, is a name for a derby gang in the USA.

58 . Terrible Turtles, is a name for a derby gang in the UK.

62 . Swiss Cake Rollers, inspired by the name of a dessert enjoyed with piping hot coffee.

63 . Salty Dolls, is the name of a popular derby gang.

64 . Eves Of Destruction, the name of a girl derby gang from the USA.

66 . Left Hook Hunnies, is the name of a league derby gang in the USA.

67 . We Recycle, is a clever name for environmentalists.

68 . Furrocious Cats, is name for a derby gang in the UK.

69 . Damsels Of Distress is a play on the words "damsels in distress".

70 . Toxic Cherries, is name for a famous  derby gang in the USA.

71 . Hellions of Troy, a popular derby gang in New York.

73 . Bells Of The Brawl, is a tweaked-name, originally taken from from "men in brawl".

76 . Queen Bees, for girl derby gangs who are always in charge!

80 . Platinum Block Divas, is a premier league derby gang in the USA.

81 . United Intergalactic Federations Of Super Babes, a group of famous and talented derby roller players in the USA.

82 . Princess Of Wheels, is an idea of roller derby team names for girls.

83 . Split Lip Sallies, a popular derby gang in the UK.

These punny roller derby names are clever choices for your skater team.

86 . Little Grrroller-Maid, is a clever pun of 'The Little Mermaid.'

87 . Hermione Danger, is a punny name inspired by Hermione Granger.

89 . Tess of the DerbyWheels, is a punny name from the famous novel, 'Tess Of The D'Urbervilles'.

90 . Alice in Rollerland, is a smart punny name from the family favorite book, 'Alice In Wonderland'.

91 . Sylvia Wrath, is a pun on the name of poet Sylvia Plath.

92 . Malice Walker, a pun on the name of musician Alice Walker.

93 . Scratcher in the Eye, a punny name inspired by J.D. Salinger's critically acclaimed novel, 'Catcher In The Rye'.

94 . Emily Deck’erson, is tweaked version of the name of author Emily Dickinson.

95 . Malice In Derby Wonderland, is another punny name from 'Alice In Wonderland'.

98 . JayK Rolling, is a stylised version of the name of the author of 'Harry Potter', J.K. Rowling.

99 . Danielle Steal, inspired by the famous bestselling author in the USA, Danielle Steel.

100 . Rapunzel, is a simple name, inspire by the children's tale 'Rapunzel'.

Kidadl has lots of great names articles to inspire you. If you liked our suggestions for roller derby names then check out these basketball team names, or for something different, these athletic girl names.