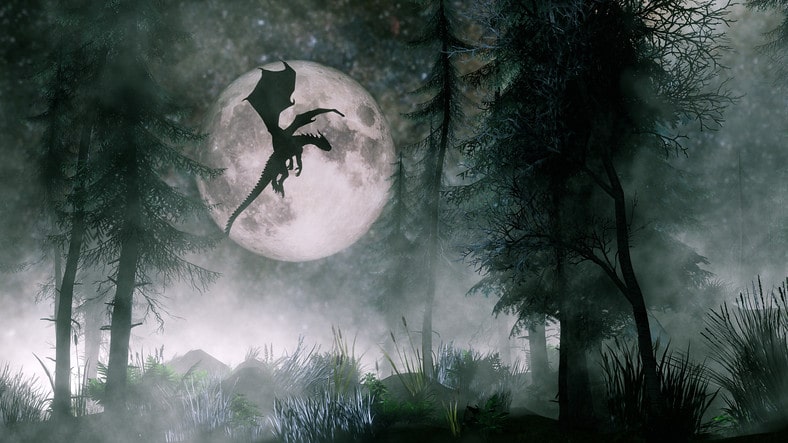 Draconic Names are extremely powerful because of what they represent.

Draconic names mean names related to dragons. Dragons are powerful, mythical creatures who were seen as bearers of wisdom in China or the East.

However, dragons or draconic lore was seen as evil in the West. In modern times, dragons have become part of our pop culture. There are many different kinds of dragons and they have their respective fire dragon names, ice dragon names, and names for water dragons.

Dragon names can be tough on your tongue but they can be cool once you understand their lore. Here is a list of cool male and female dragon names you can choose from:

3.Brenton (English origin) is based on the word 'flame' which goes well with dragons. Brenton literally means 'From Bryni's town (Town of Fire).

5.Daenerys (Greek origin) is the 'Queen of dragons' in Game of Thrones.

7.Deadheart (English origin) is a popular dragon name and could mean 'cold heart'.

12.Dragonite is a dual-type dragon in the popular cartoon Pokemon.

14.Druk (Bhutanese origin) is the 'Thunder Dragon' of Bhutanese mythology and Bhutan's national symbol. A druk is present on the flag of Bhutan.

17.Ghidorah is a giant three-headed dragon hydra and Godzilla's arch-enemy.

18.Godzilla (Japanese origin) meaning 'gorilla'. This dragon was made popular by the film of the same name, directed by Ishirō Honda.

19.Helios (Greek origin) is the name of the Greek Sun god.

20.Knucker (English origin) is a dialect word for a kind of water dragon, living in Knuckerholes in Sussex, England.

22.Mushu is the deuteragonist of Mulan. He is a popular Chinese dragon.

23.Neptune (Roman origin) is the name of the Roman god of the sea.

27.Pendragon (Anglo-Saxon origin) means 'Chief Dragon' or 'Head Dragon' representing both leadership and might. This name is an Anglo-Saxon baby’s name.

28.Shenron is a wish-fulfilling dragon from the Dragon Ball anime series.

29.Tatsuya (Japanese origin) is the name of a Japanese dragon that represents intelligence and longevity.

Dragon names can come from different origins too as they have been found in different cultures. Here's a list of names that mean 'dragon' in different languages for you to choose from:

32.Arad (Persian origin) means the Name of an Angel.

34.Doryu is one who understands the ways of a dragon.

36.Draco (Italian origin) means dragon. It is a popular name after the character Draco Malfoy from the Harry Potter series.

37.Draken (Greek origin) Boys with this name have a strong desire for a stable family or a community. They also need appreciation by working with others.

40.George (English origin) refers to the knight who slew a fire-breathing dragon.

41.Georgina (English origin) refers to the medieval legend when a farmer slew a fire-breathing dragon.

45.Kaliyah (Indian origin) is a girl’s name, and it means the killer of a thousand-headed dragon.

46.Ladon (Greek origin) denotes influential personalities. Boys with this name are focused on their goals, and they work on setting new ones.

49.Melly (Greek and French origin) show the same braveness and uniqueness as one can see in dragons!

50.Meraxes (Russian origin) is a female dragon from Game of Thrones.

51.Ryoko (Japanese origin) is a girl’s name that means dragon.

55.Yang (Korean origin) meaning 'brave' is used as a girl’s name that can also be used as a family name. It is related to the philosophy of Yin-Yang.

Dragons have been an important part of mythologies. Here's a list of the famous ones that can inspire you with names:

56.Abrasax is a well-known term in Gnostic traditions, where the entity is considered as the great ‘Archon’ or God.

57.Akhekh is a fantastical beast with a long serpentine body that is supported by its four legs. The creature was said to reside in remote corners of the Egyptian lands.

58.Bahamut - Child of the dragon god Io. Referred to as the God of the Dragons.

59.Campe is a winged serpent.

60.Chimera is a lion’s body with a dragon’s tail and a goat head on its back, slain by Bellerophon.

61.Druk or the ‘Thunder Dragon’ in Bhutanese culture.

62.Fafnir is the most famous of all the dragons mentioned in this list.

64.Ketos is also called the Kraken who tried to eat Andromeda.

65.Kholkikos - a dragon from the legend of Jason and the Argonauts.

66.Komodo is a creature found in Indonesia, known as the Komodo dragon.

67.Kraken is a dragon with tentacles.

70.Python- An earth dragon that came from Delphi.

71.Smaug is a popular dragon character from the high fantasy novel called The Hobbit by J. R. R. Tolkien.

72.Thespiakos is supposed to be a monstrous dragon who destroyed the land of Thespiai.

73.Tiamat is a popular dragon from the video game Dungeons and Dragons.

74.Vritra is the ancient Aryan Vedic texts as the main adversary of the Indra .

75.Wyvern is a legendary dragon, featuring in Polish myths.

Video games have had dragons in them for a long time, either in the entire game or part of it. The list below shows a list of character names that are part of video games:

76.Alduin is a dragon from The Elder Scrolls Skyrim. A powerful and fearsome dragon known for his destructive powers.

77.Archdemons is an intelligent dragon from the game Dragon Age: Origins and is known to be wittier than the rest.

78.Dracolich is a dragon name from Dungeons & Dragons.

79.Draigoch is a popular dragon name from Lord of the Rings Online. He is evil but known to be more powerful than the rest.

80.Enywas is an evil dragon from Darkmere.

81.Flammie is a great draconic name from the Secret of Mana. He is a beautiful white dragon who has the capability of carrying three people on his back.

82.Grigori is a massive red dragon from Dragon's Dogma.

83.Grima is a mighty dragon from the game Fire Emblem Awakening.

84.Kalameet is a huge ancient dragon from the video Dark Soul.

85.Marun/Marux is a draconic language (from gaming) word for "lightning".

86.Minerva is a dragon character in Fire Emblem. Also the name of the Goddess of Wisdom in ancient Greece.

87.Naga is another character from the Fire Emblem Awakening. Naga is the queen of six dragon tribes that used to rule the land.

88.Paarthurnax is a wise old dragon from The Elder Scrolls Skyrim.

89.Singe is a popular dragon from the game Dragon's Lair.

90.Spyro is an extremely energetic and curious dragon from the game Spyro the Dragon & Skylander. Despite his small size, he is courageous.

91.Synn is another dragon character from Dungeons and Dragons: Shadow over Mystara. Synn is a huge red dragon that is considered to be dangerous.

A lot of novels and books have dragons as protagonists. Following is a list that gives you some name ideas that you may even find as part of popular movies. If you search for male and female dragon names that you can use for your character, then here is a great list of names for dragons for you:

92.Drogon is a huge black and red dragon that was hatched by the fictional character Daenerys Targaryen. The book, A Song of Ice and Fire by George R. R. Martin, was later made into a television series called the Game of Thrones.

93.Eldrax is  a dragon who ravages the kingdom of Princess Elizabeth in The Paper Bag Princess.

94.Faranth is the last Golden dragon that was shown in the book Dragonriders of Pern. He is known to be the most influential dragon in Pernese history.

95.Griffin is the main character of the book Griffin the Dragon.

96.Katla is a dragon name from a famous Swedish fictional book called The Brothers Lionheart by Lindgren.

97.Moon is a young and dynamic dragon from The Baby Unicorn and Baby Dragon.

99.Ruth is a white dragon with a great memory. He is an important character from the book Dragonriders of Pern.

100.Saphira is a kind but fierce blue-colored dragon from Eragon.

101.Viserion is another dragon hatched by Daenerys Targaryen in the novel series A Song of Ice and Fire by George R. R. Martin.