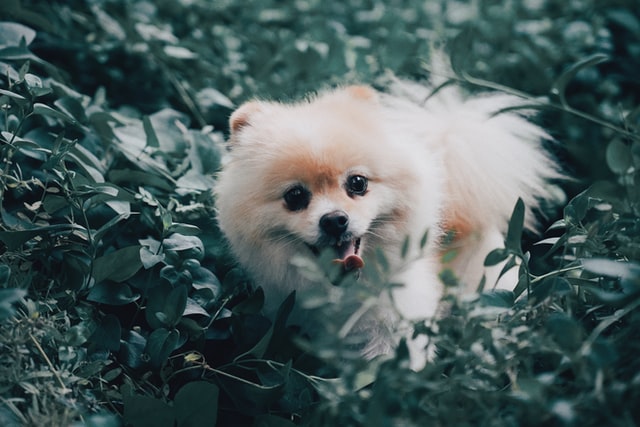 Fluffy dogs are some of the best companions you could get to make your life happier and comfier.

Their fluffy coat of fur means there will be shedding. Furthermore, finer grooming is necessary to keep them in tip-top velvety healthy shape.

There are numerous fluffy dog breeds out there - both small, large, and everything in between. The most popular ones also tend to be innately friendly breeds, e.g.: Samoyed Chow, Collies, Malamutes, and Pekingese. The names of these cuddly fluffballs of love and comfort will often reflect their caring nature.

If you are interested in learning more about different dog names, you can look at our other articles Big Dog Names and Funny Dog Names.

Here are a few funky male names befitting your fluffy friend that you may like.

12. Chewbacca (Russian origin) meaning "dog" (from 'Sobaka'). In the 'Star Wars' films, Chewbacca is a major character who is Han Solo's co-pilot on the Millennium Falcon.

18. Ethan (Hebrew origin) meaning "everlasting". As everlasting as the bond between you and your fuzzy wuzzy pet.

20. Faven (African origin) meaning "light". Although not popular, it is one of the most appropriate white fluffy dog names.

22. Gerald (Germanic origin) meaning "rule with a spear". The protagonist of the 'Witcher' fantasy saga, also known as 'White Wolf'.

32. Max (Latin origin) meaning "the greatest". One of the greatest dog names.

36. Siegmeyer (German origin) meaning "victory" and "noble". Siegmeyer is a knight in 'Dark Souls' known for his comically round armor.

37. Snowy (English origin) meaning "covered in snow". The adored pet sidekick of Tintin from Herge's classic comic book series. The character was possibly a Wire Fox Terrier, but it suits all fluffy dogs who are white, such as a Bichon Frise.

38. Suave (Spanish origin) meaning "soft". One of the elegant but cute names for dogs.

47. Cassandra (Greek/Spanish/French origin) meaning "shine upon mankind". One of the best fluffy puppy names for breeds like Corgi and Samoyed Chow.

49. Chloe (Greek origin) meaning "blooming". If you like Greek myth and have a fluffy dog, this can be a great fluffy dog name with sophistication.

51. Donna (Italian origin) meaning "lady of the home". This could be among the fitting dog names for lady dogs.

52. Dory (Greek origin) meaning "gift of God". It can be a great name for a fluffy dog and if you like 'Finding Nemo'.

53. Doux (French origin) meaning "fluffy". A literal yet fancy name for your dog.

54. Ebele (African origin) meaning "compassion". Among the names for dogs which are sweet in sound and meaning.

61. Lacey (French origin) meaning "lassey", a place in Normandy. One of the best name ideas if you braid your dog's long hair.

78. Winnie (English origin) meaning "one who makes friends with peace".

Unisex names for fluffy dogs that go both ways.

83. Bear (Old English origin) meaning "the brown one". A great name for a samoyed chow.

84. Bernie (French origin) meaning "bold as a bear". One of the sweet unisex dog names.

94. Dylan (Welsh origin) meaning "born of the ocean". Famous personalities with this name include the poet Dylan Thomas.

95. Fluffy (English origin) meaning "fleecy; covered with fluff". One of the most obvious dog name ideas, but you cannot go wrong with this adorable name!

100. Laika (Swahili origin) meaning "angel". Laika is the first dog (and the first living creature) to orbit the earth from outer space.

103. Peanutbutter (English origin) is a portmanteau between 'peanut' and 'butter', a buttery paste made out of crushed peanuts. Mr Peanutbutter is a famous Labrador Retriever character from the popular Netflix animated series 'Bojack Horseman'.

104. Reese (Welsh origin) meaning "ardent" and "fiery". One of the best dog name ideas for your feisty Poodle.

107. Snowball (English origin) meaning "ball of snow". One of the most literal small fluffy dog names, for breeds like tiny Pomeranians, Bichon Frise, and such.

109. Woolly (Old English origin) meaning "a clearing frequented by wolves". Also a punny name for fluffy big dogs with the wordplay on 'woolly'.

A funny-sounding dog name compilation for your silly cuddly puppy.

113. Floof (English origin) meaning "to move in a fluffy manner" or "to make something fluffy".

115. Groot (Dutch origin) meaning "large". A comic-book character created by none other than Stan Lee and Jack Kirby, Groot first appeared in the first issue of Tales to Astonish, and was more recently popularized by the Marvel film 'Guardians of The Galaxy'. A cute small twig in appearance, Groot is actually a flora colossus who can grow massively. An instantly recognizable name for your dog irrespective of its size.

116. Hooch (English origin) meaning "booze". Thanks to the film 'Turner and Hooch', this is quite the epitome of brown big fluffy dog names.

117. Jabba (Somali origin) meaning "the Jubba river". Jabba Desilijic Tiure, also known as Jabba the Hutt, is a Star Wars character that has become a popular name for Pugs and Bulldogs of late, because of their resemblance to aid character.

118. Peewee (English origin) meaning "diminutive in the form". A funny dog name for small dog breeds such as Maltese.

120. Pongo (African origin) meaning "orangutan". Pongo is Perdita's husband in the film '101 Dalmatians'. As a funny trivia, the term was used to refer to infantrymen because the genus of orangutan in question was known to dig holes in order to hide from threat - coincidentally, digging holes is a common activity for dogs as well.

121. Slinky (English origin) meaning "sleek" and "graceful". A famous 'Toy Story' character which is a toy Dachshund dog held together by a spring.

122. Weegie (Scottish origin) meaning "resident of Glasgow" but also "foolish person". Weegie the Norwegian elkhound was the pet of Herbert Hoover, the 31st President of the United States.

123. Woofer (English origin) meaning "a type of loudspeaker driver". Befitting for loud dogs, especially because the term was originally derived from a dog's 'woof'.

Kidadl has lots of great names articles to inspire you. If you liked our suggestions for fluffy dog names then why not take a look at Alaskan Dog Names, or for something different take a look at Names that mean friend.