230+ Best Genie Names To Inspire You 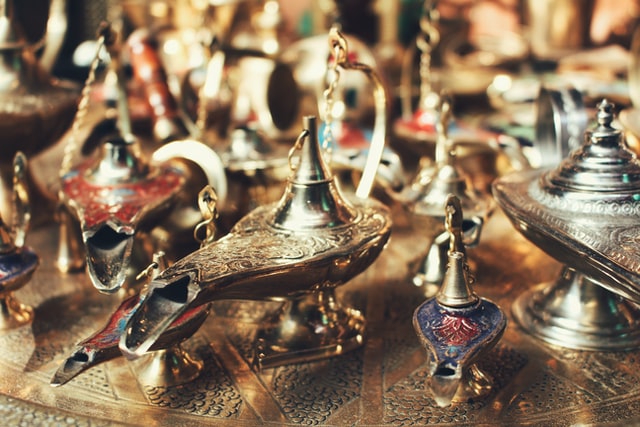 A Genie name comes with a magical touch as well as a nostalgic feeling towards the mystical deserts of Arabia.

Some of us may have been afraid of genies as a child. However, genies became quite popular after the release of the movie, 'Aladdin'.

The supernatural beings whose origin is in the Arabian mythology are called Djinn or genies in short. The origin of genies goes way back to 2400 BCE. Genies have been mentioned in the Quran a couple of times even though the actual origin date is yet to be known.  While genie names mostly tend to be Arabic inspired names, a lot of people from different cultures like to use them.  Genies were originally not supposed to be angels or demons. They were just spirits opposing both angels and demons. But fictionally genies can be good, evil, kind, cruel, helpful, mysterious, young, old, or anything for that matter.

When the word 'genie' comes to mind, we generally think of some creature we can summon by rubbing a lamp for granting us 3 wishes. Genies can even die or be forever trapped or turn into ashes if they break any rules. But the rules are not the same for every genie. Some can kill, some can fall in love and some can even bring back the dead without having to face consequences. Genies can come in any shape or form. While a lot of them can be controlled in a lamp, a lot of them are free and have free will. But there might be a lot of risks in taking help or working with/for a genie.

Many times, a human might have to sacrifice something in order to take the favor. Sacrifices can be a decreased lifespan, lose someone precious, lose something precious, or not being able to go to either hell or heaven. But our knowledge of genies has changed a lot since the early days.  We are no longer rigid about our thoughts on genies.  We watch them in plays and movies, read about them, and sometimes even name our children after them.

So read on for a list of genie names from various sources. For more magical names, take a look at Magician Names and Shaman Names.

Jinn or the male genie was conceptualized in Sindh when Islam was accepted. To begin with, Jinn was not created to be either evil or good. They were believers. Since they were not strictly Islamic spirits, it quickly found its way to other religions and cultures. They were in use in local tales. But if we only consider Islamic traditions, a jinn is used for both collective and specific types of supernatural creatures. Here is a fascinating list of a few male genies for you. These genie names are truly magical and can be a perfect name that you might like.

Female genies are called Jeannie. Djeen which is pronounced as Jean means female. The origin of Jeannie is the same as Jinn. Jeannie might or might not perform magic, can or cannot be summoned. There are a hundred ways to summon a female genie. Some Jeannie can have their own free will. They can either be helpful or harmful to the human world depending on their will. Sometimes genies who are free enjoy watching humans in agony. It is their source of entertainment. In many cases, Jeannie is forced to help the humans because she is bound to do so.  A lot of them have to serve a single master for years and years There are many genies that vanish after fulfilling their duty and cannot be summoned again. Some can be summoned multiple times. Here is a list of some names that are of female genies for you. You can use some of these genie names for your book or you can even use them for creating fantasy game characters.

The supernatural world of genies is like high school.  Some of them are popular and some are not so much. We immediately know how a few of them look, what they do, their story, and other characteristics as soon as we hear their names. We have read about them in books, watch them in the theaters, or heard about them as bed time stories. While we wanted to befriend some of them, there were definitely the ones we wanted to fight. Today, we even get to see and play with genies in online video games. Here's a list of some of our all-time favorite or most hated genie name.

A lot of times names for genies are given based on their characteristic features or behavioral features. For example, if a genie is really mysterious, they can be named 'Shenpiteki' that means mysterious in Japanese.  Some of them have names like Azraq or Ahmar that mean blue and red respectively in Arabic to focus on the color of the genie. Sometimes, sibling genies are given names that go well together like Arohi-Darohi or Niichan-Shiichan. So, there is no limit to genie names since there is no limit to features their features.

Kidadl has lots of great names articles to inspire you. If you liked our suggestions for Genie Names then why not take a look at something different like Fallen Angel Names or Female Demon Names.

Put That Bowl Down: 9 Tips And Resources For Cutting Your Child's Hair At Home
Annabelle Beaumont
No items found.