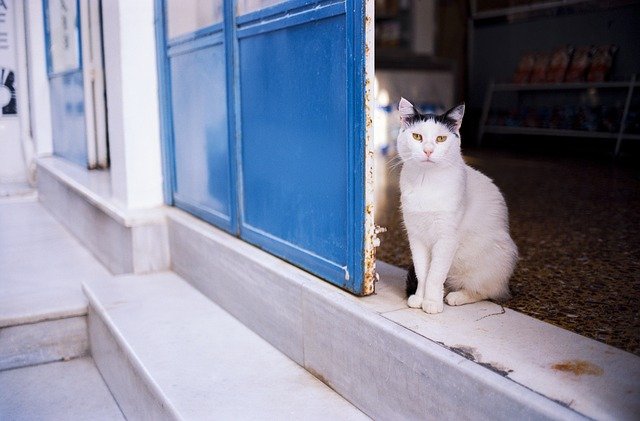 Greek mythology cat names can really add a certain appeal to your cat.

You can use ancient Greek names for cats to highlight a personality trait. Cat names derived from a Greek God or Goddess can also be used to nod to the origins of your Aegean or Greek cat.

If you are fond of ancient Greek lore, you will find this list of the best Greek cat names helpful. We have listed the best Greek cat names from Greek history and mythology. You will find the names of famous and infamous Greek Gods and Goddesses,  from Zeus to Ares or Oedipus for your male cat. Or, why not name your female cat after the Goddess of the moon, Selene or Persephone, the Goddess of grain and vegetation. You can also choose to use gender neutral names from the Greek language such as Dion, Onyx, and Phoenix.

Greek cat names give you lots of options to play around with. You could name your male cat after a Greek Titan you admire, or honor your female cat by naming her after a Greek Goddess (of the moon, of love and beauty, or something else, the choice is yours). If your feline friend is of a certain temperament, you could look for cat names from Greek mythology that fondly describe this disposition of theirs. No matter what, you are sure to find a Greek cat name that is befitting for your cat.

Did you know that 'gata' is Greek for cat, and 'cattus' is the Latin term used to denote cats? Interestingly, the Greek Goddess Bastet is commonly believed to be the God of cats in Greek mythology. Amusing, isn’t it? Several Greek names derive from its rich mythological literature, its Gods, Goddesses, and even it demons. Why choose ordinary names for your darling cats when you can give them a divine, meaningful name sourced from ancient Greek lore? We have listed multiple Greek and Greek-inspired names that you could call your male and female cats below.

4. Atlas – From the mythical Greek Titan who shoulders the world. The name means “support.”

5. Argo – Greek mythological word, meaning “ship" that carried Jason on his quest for the Golden Fleece.

7. Briareos – Meaning “stout and strong”. Briareos was a hundred-armed Titan in Greek literature.

11. Cronus – Indicating the Greek God Chronos, the youngest of the first generation of Greek Titans, father of Zeus.

12. Cyebele - From the Greek Goddess of nature.

13. Crete – From the largest Greek island in the Mediterranean.

14. Dionysus – From the Greek God of wine and fertility, son of Zeus.

15. Demeter – From the Greek Goddess of grain and harvest, sister to Zeus.

16. Delphi – From the Greek city that was home to the Oracle of the Ancient Greeks.

17. Deucalion – Son of Prometheus, who survived the floods commanded by Zeus.

18. Dodona – Oldest Hellenic Oracle, believed to be the Oracle of Zeus.

20. Ephialtes – From the Greek God of nightmares.

21. Epimetheus – The name of another Greek God. The name means “afterthought.”

26. Aphrodite – From the Goddess of love and beauty.

28. Athena – From Athena,  Goddess of wisdom from Greek mythos. Athena was also the female God of war.

30. Alcmene – Meaning “strong in wrath.” Alcmene was a mortal Princess who birthed the Titan, Hercules.

33. Cyrena – Meaning “enchanting,” traced from the name of the Mother of Aristaeus in Greek mythology.

35. Cleo – Meaning “to make famous,” identified as the muse of history in the Greek mythical landscape.

36. Damaris – Meaning “gentle.” She is mentioned in the Bible.

37. Delphina – Meaning “woman from the Greek city of Delphi.”

38. Damara – Damara, meaning “gentle,” is another form of the name Damaris.

42. Hera – An Olympian Goddess, wife, and sister to Zeus. She is the Goddess of marriage.

43. Hestia – Meaning “heart”. Hestia was the Greek Goddess of domesticity.

49. Medusa – Meaning “protectress.” She was one of the three Gorgons in Greek myth.

You can find a selection of Greek cat names for your male cats listed here.

52. Achilles – Mythical hero of the Greek Iliad who was slain in the Trojan War.

53. Aegean – Derived from Aegeas, the Greek God of storm.

54. Hermes – Greek God of commerce, identified with the Roman Mercury.

55. Hades – Greek God of the Underworld, brother to Zeus, Demeter, and Poseidon.

59. Iapetus – Meaning “to pierce.” Iapetus was the father of Atlas in Greek mythology.

61. Jason – Greek leader of the Argonauts.

62. Oceanus – Personification of the earth-surrounding ocean, from the Greek word Okeanos.

64. Otus – Greek mythological giant, one half of the Aloadae.

67. Pirithous – King of the Lapiths in Greek mythology. Pirithous was Theseus’s best friend, according to ancient Greek lore.

68. Poseidon – Greek God of the sea. The Greeks identified Poseidon with Neptune.

69. Theseus – Early King of Athens, according to ancient Greek legends.

70. Titan – The Titans were pre-Olympian Gods and Goddesses.

71. Uranus – Meaning “heaven personified.” Uranus was the Father of the Titans.

The Greek language is a treasure trove of unique meaningful names; we have listed some more Greek cat names for you below.

73. Athens – Name of a Greek city, derived from Athena, Goddess of wisdom.

74. Caucasus – Meaning derived from Greek myth, indicating one of the pillars supporting the world.

77. Hecate – Goddess of magic and witchcraft.

78. Icarus – The son of Dedalus, who escaped from Crete.

79. Ilium – Former name of the Greek city of Troy.

83. Nikolaos – Meaning “victory of the people.”

85. Nike – Nike was the Goddess of victory in Greek myth.

87. Ossa – Ossa was famous for her wrath in Greek legends.

88. Orion – Zeus placed Orion as a constellation among the stars.

91. Sicily – Ancient Greek city, the site of many incidents and events in Greek history and mythology.

98. Tethys – Meaning “nurse or grandmother.” She was the Greek Goddess of freshwater.

99. Theo – Meaning “God.” Thea and Theodora are all female forms of this name.