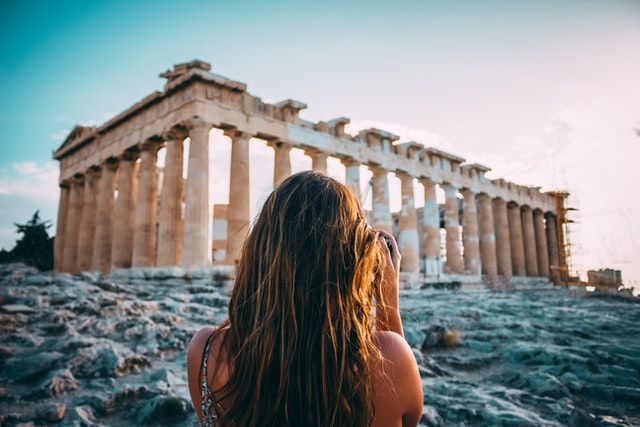 The ancient Greek civilization was a peerless blend of science, art, and knowledge which is reflected in Greece's famous philosopher quotes.

With the motto 'Eleftheria i thanatos' ('Freedom or Death'), the ancient Greeks effectively infused the values of glory, loyalty, intelligence, and hospitality into their culture. The sheer simplicity and insight of any famous Greek philosopher or thinker's quote make them a timeless gem.

Be it  Socrates, Aristotle, Plato, or Epicurus, name any Greek philosopher and you'll get a plethora of Greek wisdom in the form of profound philosophical quotes. For instance, Aristotle's "Love is composed of a single soul inhabiting two bodies" is one of the classic Greek philosopher quotes relevant even today. It might even be the most famous quote ever along with Socrates' wisdom quote, “The only true wisdom is in knowing you know nothing”. The knowledge and insight that the Greek philosopher quotes impart about the world, various human qualities, and different aspects of life are indeed something we can all cherish even though they were said many thousands of years ago.

For more Greek wisdom, take a look at [The Odyssey quotes] and [Illiad quotes].

Here are some intensely thought-provoking Greek philosopher quotes that are significant even in today's world and age.

1. “Anybody can become angry - that is easy, but to be angry with the right person and to the right degree and at the right time and for the right purpose, and in the right way - that is not within everybody's power and is not easy.”

2. “Nothing is more active than thought, for it travels over the universe, and nothing is stronger than necessity for all must submit to it.”

3. “Nothing exists except atoms and empty space; everything else is just opinion.”

4. “It is hard to contend against one’s heart’s desire; for whatever it wishes to have it buys at the cost of soul.”

5. “Medicine to produce health must examine disease; and music, to create harmony must investigate discord.”

6. “You shall, I question not, find a way to the top if you diligently seek for it; for nature hath placed nothing so high that it is out of the reach of industry and valor.”

8. "No man ever wetted clay and then left it, as if there would be bricks by chance and fortune."

9. "He who is of calm and happy nature will hardly feel the pressure of age, but to him who is of an opposite disposition youth and age are equally a burden."

11. "The greatest way to live with honor in this world is to be what we pretend to be."

Here are some wise Greek philosopher quotes about the world and its people.

12. "The greater the difficulty, the more the glory in surmounting it."

13. "All human actions have one or more of these seven causes: chance, nature, compulsions, habit, reason, passion, desire."

-Aristotle, 'The Art Of Rhetoric'.

14. "Youth is easily deceived because it is quick to hope."

15. "The ideal man bears the accidents of life with dignity and grace, making the best of circumstances."

16. "The very spring and root of honesty and virtue lie in good education."

18. "When men speak ill of thee, live so as nobody may believe them."

19. "Even when laws have been written down, they ought not always to remain unaltered."

-Aristotle, 'Politics,' Should Law Be Changed?

21. "Apply yourself both now and in the next life. Without effort, you cannot be prosperous. Though the land be good, you cannot have an abundant crop without cultivation."

22. "It is just that we should be grateful, not only to those with whose views we may agree, but also to those who have expressed more superficial views; for these also contributed something, by developing before us the powers of thought."

23. "The life of money-making is one undertaken under compulsion, and wealth is evidently not the good we are seeking; for it is merely useful and for the sake of something else."

Increase your understanding of the Greek culture with these Greek philosopher quotes on knowledge and learning.

25. “When you want wisdom and insight as badly as you want to breathe, it is then you shall have it.”

26. "The one exclusive sign of thorough knowledge is the power of teaching."

27. “Are you not ashamed of heaping up the greatest amount of money and honor and reputation, and caring so little about wisdom and truth and the greatest improvement of the soul?”

-Plato, 'The Trial And Death Of Socrates.'

28. "The learning and knowledge that we have, is, at the most, but little compared with that of which we are ignorant."

29. “One thing I know, that I know nothing. This is the source of my wisdom.”

30. “True wisdom comes to each of us when we realize how little we understand about life, ourselves, and the world around us.”

31. "Silence at the proper season is wisdom, and better than any speech."

32. "The only true wisdom is in knowing you know nothing."

Here are some classic Greek mythology quotes and quotes about the Greek Gods.

35. "But his sister, Artemis of the wild, the lady of wild beasts,

scolded him bitterly and spoke a word of revilement:

'You run from him, striker from afar...Fool, then why do you wear that bow, which is wind and nothing.”

36. “They did not know her-gods are hard for mortals to recognize.”

37. “Her gray eyes clear, the goddess Athena answered, "Down from the skies I come to check your rage if only you will yield.”

38. “All things are in the hand of heaven, and Folly, eldest of Jove's daughters, shuts men's eyes to their destruction. She walks delicately, not on the solid earth, but hovers over the heads of men to make them stumble or to ensnare them.”

39. “Sing, O muse, of the rage of Achilles, son of Peleus, that brought countless ills upon the Achaeans.”

40. “Ruin, eldest daughter of Zeus, she blinds us all, that fatal madness—she with those delicate feet of hers, never touching the earth, gliding over the heads of men to trap us all. She entangles one man, now another.”

A deathless Goddess-- so she strikes our eyes!”

42. “Ah how shameless – the way these mortals blame the gods. From us alone they say come all their miseries yes but they themselves with their own reckless ways compound their pains beyond their proper share.”

43. “Hateful to me as the gates of Hades is that man who hides one thing in his heart and speaks another.”

no land at all in sight, nothing but sea and sky-

then Zeus the son of Cronus mounted a thunderhead

above our hollow ship and the deep went black beneath it."

45. “Stand beside me, Athena, fire me with daring, fierce as the day we ripped Troy's glittering crown of towers down. Stand by me - furious now as then, my bright-eyed one - and I would fight three hundred men, great goddess, with you to brace me, comrade-in-arms in battle!”

46. "Athena: You wish to be called righteous rather than act right. [...] I say, wrong must not win by technicalities."

47. “Bear up, my child, bear up; Zeus who oversees and directs all things is still mighty in heaven.”

Check out the best Greek love quotes from famous personalities of the time.

48. "Those who intend on becoming great should love neither themselves nor their own things, but only what is just, whether it happens to be done by themselves or others."

49. "True love never has a happy ending, because there is no ending to true love."

50. “Whatever possession we gain by our sword cannot be sure or lasting, but the love gained by kindness and moderation is certain and durable.”

51. “Of all the varieties of virtues, liberalism is the most beloved.”

52. “There are three classes of men; lovers of wisdom, lovers of honor, and lovers of gain.”

Of all the weight and pain in life,

That word is Love.”

54. “Selfishness doesn’t consist in a love to yourself, but in a big degree of such love.”

55. "To love rightly is to love what is orderly and beautiful in an educated and disciplined way."

56. "Love is the joy of the good, the wonder of the wise, the amazement of the Gods."

57. "Love is composed of a single soul inhabiting two bodies."

58. “At the touch of love everyone becomes a poet.”

Here at Kidadl, we have carefully created lots of interesting family-friendly quotes for everyone to enjoy! If you liked our suggestions for Greek quotes then why not take a look at [Achilles quotes], or [Plato symposium quotes].