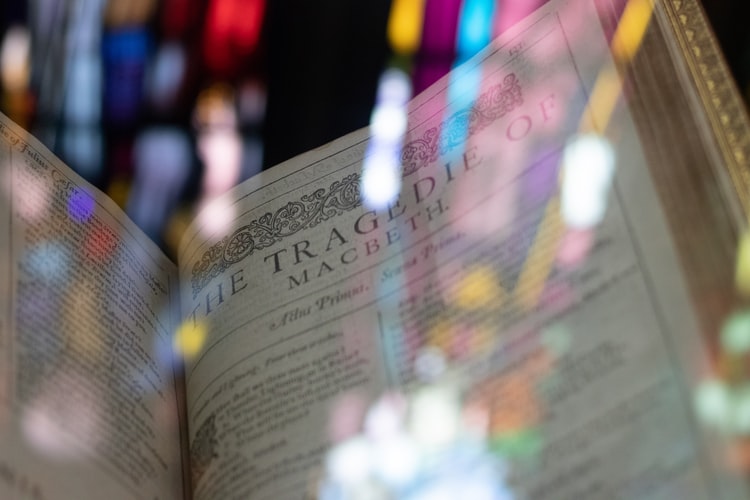 'Macbeth' was first published in the Folio of 1623 and is Shakespeare's shortest tragedy.

Macbeth was a Scottish general who had been fighting for King Duncan. The story begins when the two generals, Macbeth and Banquo, are out on patrol and discover three strange women.

The women turn out to be sister witches or the like and prophecy to Macbeth and Banquo about the things that could be. They tell Macbeth that he is destined to have two promotions: once as Thane of Cawdor and finally as King of Scotland. Though Banquo himself isn't promised much, he is informed that his descendants shall be kings. They want to hear more, but the weird sisters disappear, and they move along, bemused. Macbeth, spurred by his ambition and that of his even more ambitious wife, murders King Duncan and promptly accedes to the throne. The consequences to his ambition include that his reign is bloody and tyrannical – eventually leading to his downfall, where he is finished by the combined forces of Scotland and England.

Macbeth's wife is seen waiting uneasily for him to kill Duncan. Macbeth arrives and is extraordinarily distressed. He says that he has "done the deed" but has brought back the daggers that he ought to have planted with the intoxicated grooms and refuses to travel back. His wife takes them and stresses the importance of smearing the grooms with blood. Macbeth thus achieves what was prophesied for himself but disapproves of what was prophesied for Banquo. He needs to stay king. He thus meets two murderers and conspires to kill Banquo and his son Fleance. The murderers kill Banquo but fail to kill Fleance as he escapes. The King receives the news but then sees Banquo's ghost sitting in his place at the feast. Macbeth seeks and meets the witches. They conjure apparitions to deal with his considerations and then vanish. Macbeth learns that Macduff is in England. He has been warned to "beware of Macduff" and thus resolves to seize Macduff's property and slaughter his family. A traveler advises Macduff's wife to escape the looming horror. But then the murderers enter, and one amongst them kills her son. She flees wailing "Murder". Ross arrives, and they share the news of Macduff's slaughtered family.

Shakespeare's main supply for the story was 'Holinshed's Chronicles', significantly its accounts of Macbeth and Macduff and Duncan. However, events within the play disagree extensively with events involving the historical Macbeth. In theatre, 'Macbeth' has been related to a curse. People have avoided speaking its title, calling it 'The Scottish Play'. However, it's attracted many of the foremost actors to the leading roles and has been custom-made for multifaceted media. It is one play that has been consistently and endlessly in production since the 1660s.

'Macbeth' has left us with many inspirational, ambitious, and thought-provoking quotes to introspect on our lives. Let's look at some of the best quotes from 'Macbeth' about ambition. If you like these, you should definitely read our Lady Macbeth Quotes and ['Macbeth' Important Quotes].

1. "Whence is that knocking? How is’t with me, when every noise appalls me? What hands are here! Ha, they pluck out mine eyes. Will all great Neptune’s ocean wash this blood clean from my hand? No, this my hand will rather the multitudinous seas incarnadine, making the green one red."

2. "You wait on nature’s mischief. Come, thick night, and pall thee in the dunnest smoke of hell, that my keen knife see not the wound it makes, nor heaven peep through the blanket of the dark, to cry, ‘Hold, hold!’"

Quotes on the theme of ambition from the play 'Macbeth'.

3. "Gainst nature still! Thriftless ambition, that will raven up Thine own lives’ means! Then ’tis most like The sovereignty will fall upon Macbeth."

Let's have a look at Macbeth famous quote on ambition.

5. "Stars, hide your fires, Let not light see my black and deep desires. The eye wink at the hand; yet let that be which the eye fears, when it is done, to see."

6. "My thought, whose murder yet is but fantastical, shakes so my single state of man that function is smother'd in surmise, and nothing is but what is not."

Varying Macbeth quotes on ambition from scene 1 of 'Macbeth'.

7. "I am thane of Cawdor. If good, why do I yield to that suggestion whose horrid image doth unfix my hair, and make my seated heart knock at my ribs, against the use of nature?"

8. "Make thick my blood, stop up th’access and passage to remorse, that no compunctious vistings of nature, shake my fell purpose, nor keep peace between th’effect and it."

Macbeth's quote on ambition but without the illness is here for all kinds of audiences.

10. "Out, out, brief candle! Life’s but a walking shadow, a poor player that struts and frets his hour upon the stage and then is heard no more. It is a tale told by an idiot, full of sound and fury, Signifying nothing."

11. "Thou wouldst be great; Art not without ambition, but without The illness should attend it. What thou wouldst highly, that wouldst thou holily; wouldst not play false, and yet wouldst wrongly win."

Here at Kidadl, we have carefully created lots of interesting family-friendly quotes for everyone to enjoy! If you liked our suggestions for Macbeth Ambition Quotes, then why not take a look at [Macbeth Witches quotes], or 'The Tempest' quotes?