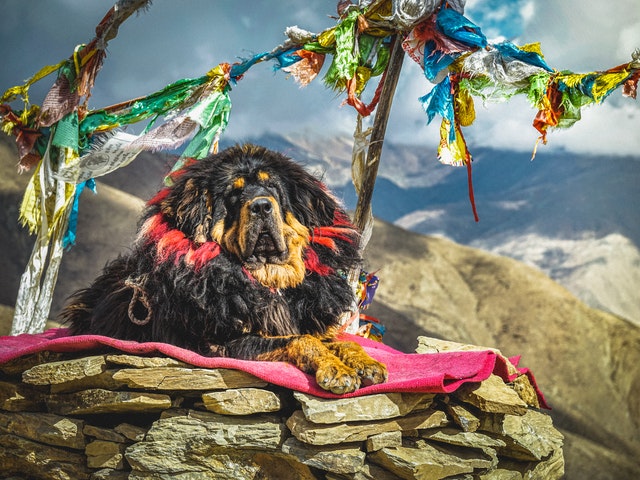 Mastiffs are one of the most ancient dog breeds.

Mastiffs are mainly known for their enormous size. Yet they are a very calm and sensitive breed.

Here is our list of the perfect names for these lovely giants that you may find helpful and even get a good name for your furry prince or princess.

If you would like even more dog names, check out these articles Alaskan Dog Names and Big Dog Names.

Mastiffs are usually huge, with muscles, but there are still many differences in size between the breeds. Here's a list of name ideas to help you search for all male-female mastiff dog names, especially if you are looking for names according to their size.

4. Brawny (M) refers to someone who is muscular and has considerable strength. You may love this word, you can find it fitting for an adolescent canine.

8. Burly (M) means "heavily built". This is a popular and cute puppy name.

10. Colossus (M) means "huge". For their fit muscles as well as their happy attitude, this name can be quite fitting for your titan.

15. Hulk (M) is a famous Marvel character with incredible power. Hulk is one of the popular names which you may love for your furry love.

16. Jumbo (M/F) refers to something "large in size". This is one of the cutest puppy names for your new mastiff.

18. Mammoth (M/F) refers to an extinct gigantic species of elephants with huge tasks, famous in pre-history. A good name for big family dogs.

21. Moose (M) refers to a large animal with huge antlers.

22. Rocky (M) (German origin) means "rest". You may find this as a good name for a puppy or big family dog.

25. Shrek (M)refers to a fictional character- a friendly ogre.

27. Storm (M/F) refers to a famous character of the X-Men series.

31. Whopper (M) means "something large". A happy and fun name for your mastiff.

32. Wolf (M) refers to a wild animal. A nice title if you are looking for a ferocious name for your canine.

These are some of the strong male mastiff dog names.

33. Admiral refers to the senior-most commander of a navy fleet.

36. Avalanche refers to a phenomenon when a mass of snow and rocks falls at a significant pace from mountain slopes.

38. Bandit refers to a bunch of robbers, thieves, or outlaws.  This is a popular and perfect pup name.

39. Bane (English origin) means "cause of distress or annoyance".

40. Beast refers to a large and dangerous animal.

41. Blaze (English origin) means "flame". A right and happy name for your mastiff.

44. Boss refers to a person who is in charge of an organization.

46. Bullet refers to a metal projectile that is fired from a rifle or pistol.

47. Butch refers to a masculine person. A common title if you are looking for a good name.

48. Buzz (Onomatopoeic) referring to the sound of bees. A major character in the 'Toy Story' series.

50. Captain refers to the leader or skipper of a ship, craft, or team.

52. Chief refers to the one who's a leader or ruler.

53. Chopper refers to a short axe or a helicopter.

54. Crash means "collide violently with a thing". This is a popular and perfect pup name.

56. Danger (Middle English origin) means "the possibility of harm". One of the good and new naming ideas.

57. Diesel refers to a petroleum fuel.  A new puppy can have this name.

61. Hawkeye is a famous character and the first true Marvel hero.

62. Hooch is a type of whiskey. One of the unique names for your dogs that people would love.

63. Hugh (English origin) means "mind or spirit". Hugh Grant is a famous "actor". This is a unique English mastiff name.

64. Hunter means "someone who hunts".

67. King refers to "a male ruler of an independent place".  This is a right and royal pet name.

69. Macho refers to someone who is excessively masculine.

73. Pistol refers to a small firearm.

75. Rebel a person who opposes a person in the establishment.

80. T-Bone refers to a large choice piece of steak that has a T-shaped bone.

83. Tracker refers to a person who tracks someone by following their trail.

84. Trooper means "a private soldier in a cavalry or army unit"—one of the good male dog names.

85. Yukon is derived from the Gwich'in word Yu-Kun-Ah meaning "great river". Yukon is a Canadian river.

Here's the list of some of the best strong female mastiff dog names that would be amazing for new ideas for creating names for your dog or puppy.

92. Beastie is derived from Beast. This is a great pet name for a baby female dog.

95. Courage refers to someone brave.

100. Huntress refers to a woman hunter. A new kind of naming ideas if you like or find strong dog names alluring.

111. Mystique (French origin) means "mystery". This is a popular and fun pup name.

114. Onyx refers to a gemstone. This is a cute and unique puppy name.

115. Punky refers to someone who enjoys punk rock music.

117. Queenie is derived from a lady or a woman ruler.

118. Raven refers to a bird. This is a unique Mastiff dog name.

119. Reah (Greek origin) means "to flow". Female Mastiff names like these are cute.

120. Ripley is something that follows in ripples.

121. Rogue refers to a dishonest man.

125. Sassy refers to someone who is "lively and bold".

Have a look at some of the fun mastiff names for your male mastiff.

131. Beowulf refers to a protagonist of the same name in the Old English epic poem.

134. Biggie refers to someone large. This is a lovely name for an elegant dog.

136. Chewie refers to a dog that likes chewing.

137. Chubbs refers to someone chubby.

138. Chuck Norris is a famous American actor and martial artist.

139. Chunk is a thick solid piece of something.

142. Godzilla refers to a giant monster of the movie series.

145. Kona (Hawaiian origin) meaning "lady". This is a cute and unique puppy name.

147. Monster meaning a beast, can be a fun name for your mastiff puppy.

148. Nacho refers to a Mexican food item. A fun naming idea that would be great for a fun dog.

149. Paul Bunyan is a giant lumberjack in the tales of American folklore.

150. Peewee refers to "a small child". This is a unique Mastiff dog name.

Kidadl has lots of great names articles to inspire you. If you liked our suggestions for Mastiff Names then why not take a look at Russian Dog Names, or for something different take a look at Bernese Mountain Dog names.