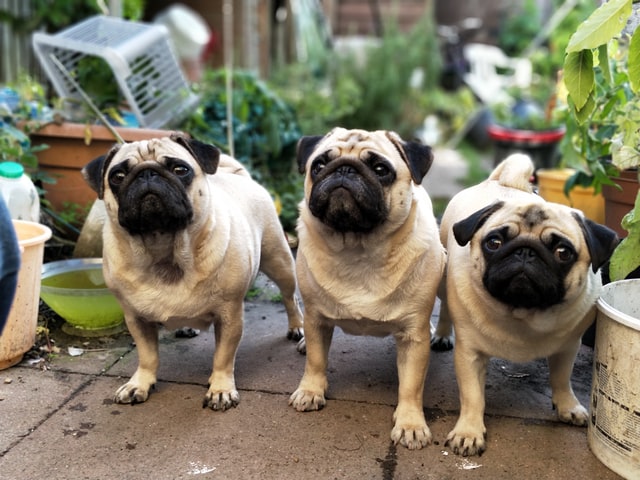 Pugs can single-handedly take over the world.

With that uber-cute face, ultra adorable eyes, and the sassiest personalities, it is next to impossible not to say yes to a pug face. The creases on their foreheads almost make them look like they are plotting for world domination.

It's only ironic that one of the most common full forms of the word "pug" happens to be "Pick Up Guru", which is ideal because, with the mind-controlling tricks up their sleeves and hypnotic eyes, they can entice their owners into giving them everything they want. Pugs, often deemed as useless lapdogs can actually be pretty smart if appropriately trained. But, most pug pup owners like to indulge them because of how adorable and loving they are. They instantly soften even the stoniest of hearts. Being crowned as the most spoiled dog breed, getting what they want is their way of life. If pugs could have their way, they would take over the world and reign supreme over all dog breeds.

If you are a new pug parent to a pocket pug (i.e., small pug) and are on the lookout for a list of names for pugs that are iconic, sassy, and always classy, look no further for this list of cute names for pugs is curated specially to serve that purpose.

If you like naming pets and want to find more names for pets, you can check out Celebrity Dog Names and Clever Dog Names.

Here's a list of the coolest names for pugs who are nothing less than your precious baby boy pug.

1. Bandit (American origin) meaning "thief." It is a perfect name for a baby black pug.

3. Bear (German origin) meaning "the brown one." One of the cute black pug names.

4. Benny (Latin origin) meaning "child of good fortune" or "blessed"; a name in its truest sense because pugs are a blessing.

5. Bentley (English origin) meaning "from the meadow of bent or coarse grass."

7. Bruno (German origin) meaning "brown." One of the most popular boy pug names.

8. Brutus (Latin origin) meaning "muscular and heavy". It is a fitting name for any black pug.

9. Bubba (American origin) meaning "little brother." A funny-sounding name if you are adopting a pug friend for your kid.

12. Buster (American origin) meaning "tough guy"; a funny contradictory name because despite pugs looking grumpy, they are actually the cutest.

16. Doug (Gaelic origin), meaning "dark,", the best name to give a black pug. Name of a famous pug personality who goes by his screen name, Doug The Pug.

17. Duke (English origin) meaning "leader"; one of the best names for a pug who rules your life.

24. Gus (English origin) meaning "great." It is a cute name for pugs with a "great" meaning!

26. Henry (French origin) meaning "home-ruler." A pug is a home ruler, so why not Henry?

30. Jax (American origin) meaning "son of Jack." A great choice for a pug name if you are a pet parent named Jack.

31. Jeb (American origin) meaning "blessing." It is one of the most common dog names.

32. Jeff (English origin) meaning "God" or "peace." One of the fitting male pug names because they bring peace into your life.

34. Loki (Norse origin) meaning "God of mischief" or "God of air"; amongst the funny pug names for mischievous pugs.

40. Murphy (Irish origin) meaning "sea warrior." One of the appropriate pug names for a pug puppy that loves the beach.

48. Rocky (English origin) meaning "filled with rocks." A tough name for your pug.

59. Yoda (Hebrew origin) meaning "one who knows." An iconic and classic character from 'Star Wars'. One of the best dog names for a pug.

Female pugs have no different scientific names. But here's a list of the classiest names for female pugs who are the sassiest.

60. Abby (Hebrew origin) meaning "my father's joy." Amongst the perfect female names for pugs who are more drawn to their human dads.

66. Ellie (Hebrew origin) meaning "God is my light"; one of the prettiest female dog names for a pug.

67. Emma (Germanic origin) meaning "whole" or "universal"; a perfect pug name for your pet who means the world to you.

76. Luna (Latin origin) meaning "the moon." A wonderful name for a pale pug.

79. Marley (English origin) meaning "from the boundary field"; the name of the famous singer, Bob Marley.

80. Mia (Italian origin) meaning "dear" or "darling." It is an adorable name for a darling pug.

84. Olive (Latin origin) meaning "the peaceful one"; one of the sweetest black pug names.

91. Princess (English origin) meaning "royal daughter." A girl pug is nothing less than a princess. Hence, this is an appropriate name.

95. Sadie (English origin) meaning "princess." A relevant name for your girl pug who is your princess.

97. Stella (Latin origin) meaning "star." It is a perfect name for your little pug star.

98. Zoey  (Greek origin) meaning "life." Your little girl pug is your life, hence, why not give her this literal name.

Here's a list of the iconic gender-neutral pugs names you will love.

99. Bean (Gaelic origin) meaning "life." One of the cutest and most adorable pug names ever.

100. Beau (French origin) meaning "beautiful" or "handsome". A fitting gender-neutral name for pugs who are the masters of good looks.

102. Boo (Greek origin) meaning "to cry aloud, roar or shout.".  Let's face it, pugs are adorable but noisy. Why not name them after an exclamatory word that's cute and appropriate too?

104. Bugsy (American origin) meaning "gangster." If you can name your pug Bug, why not Bugsy? Pugs are little gangsters in the truest sense.

106. Cookie (English origin) meaning "sweet biscuit"; One of the sweetest pug names for your little pug in a very literal sense. It is also a popular choice for puppies.

107. Giggle (English origin) meaning "snigger" or "to laugh lightly." Pugs bring you joy, which incites giggles out of you, hence an appropriate name.

109. Harley (English origin) meaning "hare's meadow." It is a fiesty name choice amongst pug names for a thug pug.

113. Oreo (Unknown origin) meaning "sandwich biscuit", an appropriate name for a Brindle pug, which is the rarest pug breed.

119. Toothless (English origin) meaning "having no teeth." Name of the adorable dragon in 'How To Train Your Dragon' who almost resembles a black pug.

Kidadl has lots of great names articles to inspire you. If you liked our suggestions for Pug Names then why not take a look at French Bulldog Names, or for something different take a look at Bernese Mountain Dog Names.