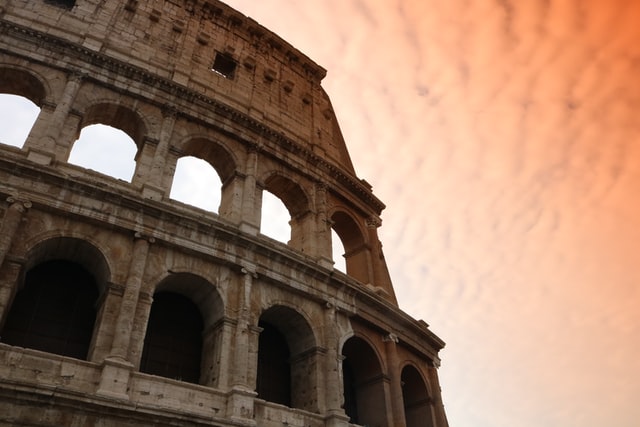 The Roman Empire held a legendary reign during the period of Ancient Rome.

The Roman Empire ruled for an approximate time frame of 1000 years. Over time, these Romans have come to be known for their influential civilization in the history of all civilizations.

The Roman Empire marked its beginning when Augustus Caesar proclaimed himself to be the first Roman Emperor in 27 BC and came to an end with the fall of Constantinople in 1453 CE. Augustus, Trajan, Hadrian, Marcus Aurelius, Aurelian were a few of the many Roman Emperors who undoubtedly left a mark on world history.

The very existence of Rome revolves around the Roman saying "Roma invicta", which means "unconquered Rome". On the other hand, the Roman motto of SPQR (which stands for "Senatus Populusque Romanus", means "the senate stands with the people of Rome". There is also a famous saying about Rome, which stands that "Rome will stand as long as Coliseum does; As Coliseum falls, Rome will fall too and when Rome falls the world will collapse too". In a way, the Roman Empire was all about standing strong and fast along with the might of its people, as these sayings represent.

Here are some famous quotes by a few of the most significant Roman Emperors and famous Roman quotes. If you like these Roman quotes, do also check out these great ancient quotes and Spartacus quotes for more.

The Roman land has witnessed the purest form of friendships and bitterest kind of betrayals. Check out these great Roman Emperor quotes to know more about Roman history.

1. "If you have overcome your inclination and not been overcome by it, you have reason to rejoice."

2. "Those most moved to tears by every word of a preacher are generally weak and a rascal when the feelings evaporate."

3. "You have control over your mind - not outside events. Realize this, and you will find strength."

4.  "I found Rome a city of bricks and left it the city of marbles."

5.  "Accept the things to which fate binds you."

6.  "Which death is preferable to every other? The unexpected."

7. "Advice in old age is foolish; for what can be more absurd than to increase our provisions for the road the nearer we approach our journey’s end."

8. "An unexamined life is not worth living."

9.  "Cherish the people with whom fate brings you together, but do so with all your heart."

10.  "Rome has grown since its humble beginnings that it is now overwhelmed by its own greatness."

Below are some elegant ancient quotes and Roman Emperor quotes. Which one of these quotes is your favorite?

11. "An angry man is again angry with himself when he returns to reason."

12. "Do not act as if you were going to live ten thousand years. Death hangs over you. While you live, while it is in your power, be good."

13. "Say not always what you know, but always know what you say."

14. "I had rather be first in a village than second at Rome."

15. "You have power over your mind - not outside events. Realize this, and you will find strength."

16. "If you must break the law, do it to seize power: in all other cases observe it."

17. "The greatest impediments to changes in our traditional roles seem to lie not in the visible world of conscious intent, but in the murky realm of the unconscious mind."

18. "Cowards die many times before their deaths; The valiant never taste of death but once."

God blessed the Roman Empire with the birth of many exceptional and extraordinary philosopher figures whose work has resulted in some insightful quotes.

20. "The various modes of worship which prevailed in the Roman world were all first considered by the people as equally true; by the philosopher as equally false; and by the magistrate as equally useful."

21. "Anybody can become angry - that is easy, but to be angry with the right person and to the right degree and at the right time and for the right purpose, and in the right way - that is not within everybody's will and is not easy."

23. "If someone is able to show me that what I think or do is not right, I will happily change, for I seek the truth, by which no one was ever truly harmed. It is the person who continues in his self-deception and ignorance who is harmed."

25. "So much for the Emperors; the rest of this history must deal with the Monster."

27. "There is no such thing as pure pleasure; some anxiety always goes with it."

29. "If you have a garden and a library, you have everything you need."

30. "Can anyone be proved innocent, if it be enough to have accused him?

Famous Quotes By Marcus Aurelius And Other Roman Emperors

Enjoy this all-time eminent compilation of famous sayings from the work of distinguished and brave men.

31. "If you are distressed by anything external, the pain is not due to the thing itself, but to your estimate of it; and this you have the order to revoke at any moment."

32. "Men willingly believe what they wish."

33. "It is better to create than to learn! Creating is the essence of life."

34. "It is easier to find men who will volunteer to die than to find those who are willing to endure pain with patience."

35. "The life of money-making is one undertaken under compulsion, and wealth is evidently not the good we are seeking; for it is merely useful and for the sake of something else."

36. "I have always reckoned the dignity of the republic of first importance and preferable to life."

37. "A shoe that is too large is apt to trip one, and when too small, to pinch the feet. So it is with those whose fortune does not suit them."

38. "If you must break the law, do it to seize authority: in all other cases observe it."

39. "Never let the future disturb you. You will meet it, if you have to, with the same weapons of reason which today arm you against the present."

41. "The object of life is not to be on the side of the majority, but to escape finding oneself in the ranks of the insane."

Here at Kidadl, we have carefully created lots of interesting family-friendly quotes for everyone to enjoy! If you liked our suggestions for 40+ of the best Roman quotes for all history buffs, then why not take a look at these Greek quotes and Tacitus quotes too?