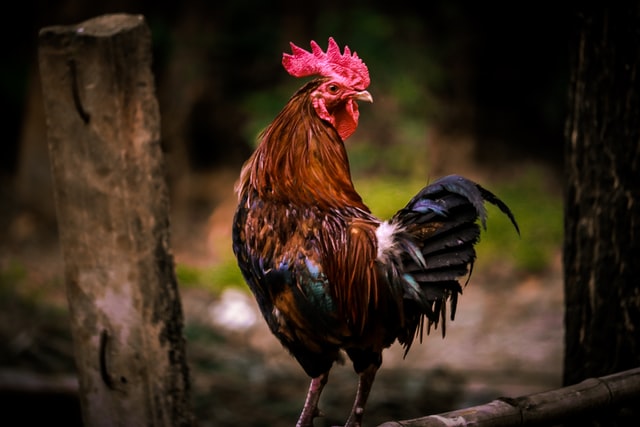 A rooster is an adult male chicken.

Younger roosters are referred to as cockerels. We have all of the best name ideas for your new pet rooster in this list.

Chickens have an established pecking order in their flock and males tend to be friendlier as youngsters, but become more aloof as they age. They communicate using 30 different sounds, especially when trying to lure chicks when hens lay eggs. The call of a rooster that typically begins before they're four months old is called crowing. Crowing is usually depicted as occurring at the break of dawn, represented by the sound, "cock-a-doodle-doo"!

There are different breeds of roosters, with Malay roosters being the most aggressive as they were bred for cockfighting. Salmon Faverolles are the friendliest breed of roosters, known for their calm disposition.

Roosters deserve great names and there are plenty of options to choose from. Check out our list of popular rooster names that would be an awesome fit for your rooster. For more inspiration, you can also read our articles about chicken names and phoenix names.

Choose from among these good male chicken or rooster names for your big bird.

16. Eric (Norse origin), meaning "eternal ruler". Perfect for the rooster who rules over your heart.

22. Huey (German origin), meaning "one who is bright in mind and spirit".

52. Rufio (Spanish origin), meaning "the red haired one". You could also spell it as Roofio for your rooster.

Looking for some rooster names inspired by music? Here's a list of names for you to pick from.

76. Lenny (German origin), meaning "courageous like a lion", from the song by John Mayer.

78. Ace "Chicken Little" Cluck (Latin origin), Ace means "one who excels". This is the protagonist from the 2005 Disney film, 'Chicken Little'.

79. Allan-a-Dale, name of the rooster narrator from Disney's 'Robin Hood'.

81. Fowlmouth, name of the little rooster from 'Tiny Toon Adventures'.

83. Heihei (Hawaiian origin), the name means "a disturbance to the norm". This is the rooster from 'Moana'.

Want an element of humor in the name? Check out these funny rooster names for inspiration.

85. Alarm Clock, because with him around, you'll have to wake up early.

87. Arnold Swartz-an-egger, a clever wordplay on the name, Arnold Schwarzenegger.

89. Big Red, celebrating the color of your rooster.

90. Chick Jagger, a play on the name of singer, Mick Jagger.

92. Doodle Doo, inspired by the "cock-a-doodle-doo" sound they make.

93. Dr. Pecker, because he's a pro at pecking. Dr. Pecker would enjoy your backyard.

95. Elvis Peckley, a play on the name of singer, Elvis Presley.

96. Gregory Peck, inspired by the 'To Kill A Mockingbird' actor.

97. His Eggselency, a royal name for "his excellency".

103. Rooster Cogburn, from the fictional character in the novel, 'True Grit'.