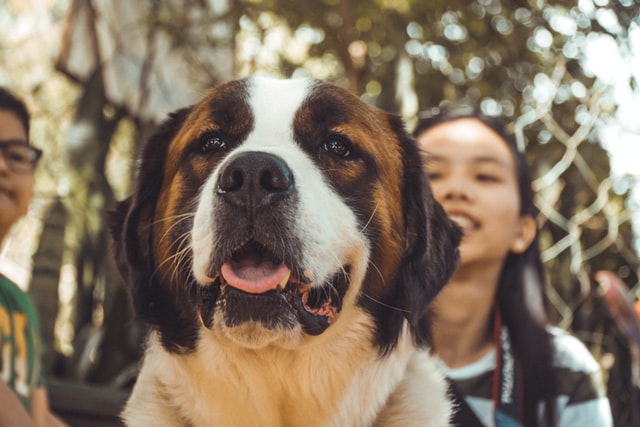 St Bernard is a gigantic breed of working dogs.

They are predominantly found in the Alps, specifically in the western region of Italy and Switzerland. Owing to their huge size and working nature, they are used as helper dogs for people or tourists who get into trouble in the mountains.

St Bernard dogs are reddish in color with brown, black, and white stripes. These dogs have derived their name from the 11th-century Italian monk Bernard of Menthon, who bred these dogs at Bernard pass. These dogs are a good family dog, and they grow at a very fast rate and become cute, gentle giants. If you are looking to name your Saint Bernard doggo, then the names below will be an excellent recommendation.

If you are interested in more dog names, check out these other similar articles Husky Names and Big Dog Names.

Best Names For Your Cute Giant

6. Bubba (M) refers to a loving nickname one calls their brother.

8. Canyon (M) (Spanish origin) means "a deep gorge". The Grand Canyon in the USA is a popular site for visitors.

10. Chunky (M) refers to someone who's bulky and thick.

11. Cookie (F) is a type of sweet confectionery or biscuits.

12. Cuddles (M/F) means "to hold closely with one's arms around another as a way of depicting love and affection".

20. Fluffy (M/F) refers to something that is something covered by fluff. Fluffy falls under the names of famous St. Bernards.

25. Hero (M) refers to "a person admired for noble qualities and courage".

27. Jingles (M/F) refers to "a Christmas decoration or a light sound made by bells".

38. Misty (F) was a major character in the 'Pokemon' series.

Enlisted below are the best female names for Saint Bernard that are elegant.

54. Dakota (Native American origin) meaning "fuse together". This can be a great Saint Bernard dog name.

56. Duchess refers to a woman who holds the same rank as a Duke.

60. Huntress refers to a woman hunter.

61. Katniss (American origin) means "a type of plant". Saint Bernard girl names like these are fancy.

64. Mama refers to the name by which mothers are addressed by their child.

66. Phoenix is a mythical bird that symbolizes immortality. It is an excellent option for female Saint Bernard dog names.

67. Precious refers to something of immense value.

68. Princess, daughter of a king or queen.

69. Rousey means "someone who is noisy".

Here are some of the best male dog names.

75. Boss refers to a person who is in charge of a group or organization.

78. Chief refers to the one who's a leader or ruler.

82. Major refers to something significant and important.

83. Meatball refers to a food dish, which is a ball of meat.

84. Moses (Hebrew origin) meaning "to pull out or draw out". Moses can be an outstanding St Bernard puppy name.

86. Neptune was the Roman God of the freshwater and sea and can be a great male St. Bernard name.

87. Octane refers to an organic compound.

89. Pharaoh refers to the Egyptian kings and emperors. This is a lovely example of a Saint Bernard's dog name.

93. T-Bone, refers to a large piece of steak which has a T-shaped bone. Strong dogs can be named T-Bone.

95. Thunder refers to "a loud rumbling sound usually heard after a lightning".

96. Vader refers to 'Darth Vader' of the 'Star Wars' series. This can be perfect as dog names for Saint Bernards that are cute.

98. Wrangler means "someone in charge of live-stocks on a farm".

Enlisted below are some of the best Saint Bernard dog names that are big in size.

100. Blizzard refers to a severe snowstorm. Blizzard is one of the perfect names for Saint Bernard dogs.

103. Colonel refers to a rank of officer in the Army or Air Force.

104. Grizzly refers to a large animal of brown color. Grizzly bears are prevalent in Canada.

110. Meatloaf is a kind of dish made of ground meat.

111. Moose refers to a large animal with huge antlers.

112. Rocket (Italian origin) means "distaff" and is a character's name in the 'Guardians of the Galaxy' series.

116. Shaq (Islamic origin) means "warrior". This is an excellent name to get for a Saint Bernard puppy.

117. Sumo is a form of Japanese heavyweight wrestling.

118. Tempest refers to a ballast windy storm of the sea.

120. Warrior refers to a brave fighter. Saint Bernard names like warrior are elegant.

122. Yukon refers to a place in Canada that is famous for its cold and Gold.

125. Bane is the name of a supervillain in the 'Batman' comics.

128. Beethoven (M) (German origin) means " beetroot farms". Beethoven was one of the greatest music composers of all time. St Bernard names like Beethoven are special.

132. Cardi (F) is named after Cardi B, who is a famous singer. This can be a perfect name for Saint Bernards that are cute.

138. Jagger (M) is inspired by the iconic musician Mick Jagger.

143. Shiva (M) refers to the Hindu god of destruction.

145. Tramp (M) means "someone who walks very heavily or noisily".

146. Trapper (M) refers to a poacher who traps wild animals for their fur.

147. Trojan (M) refers to something relating to Troy.

148. Watson (M) (Scottish origin) meaning "son of Walter". This will be a lovely name for a strong Saint Bernard puppy.

Kidadl has lots of great names articles to inspire you. If you liked our suggestions for Saint Bernard Names then why not take a look at Alaskan Dog Names, or for something different take a look at Star Wars Dog names.