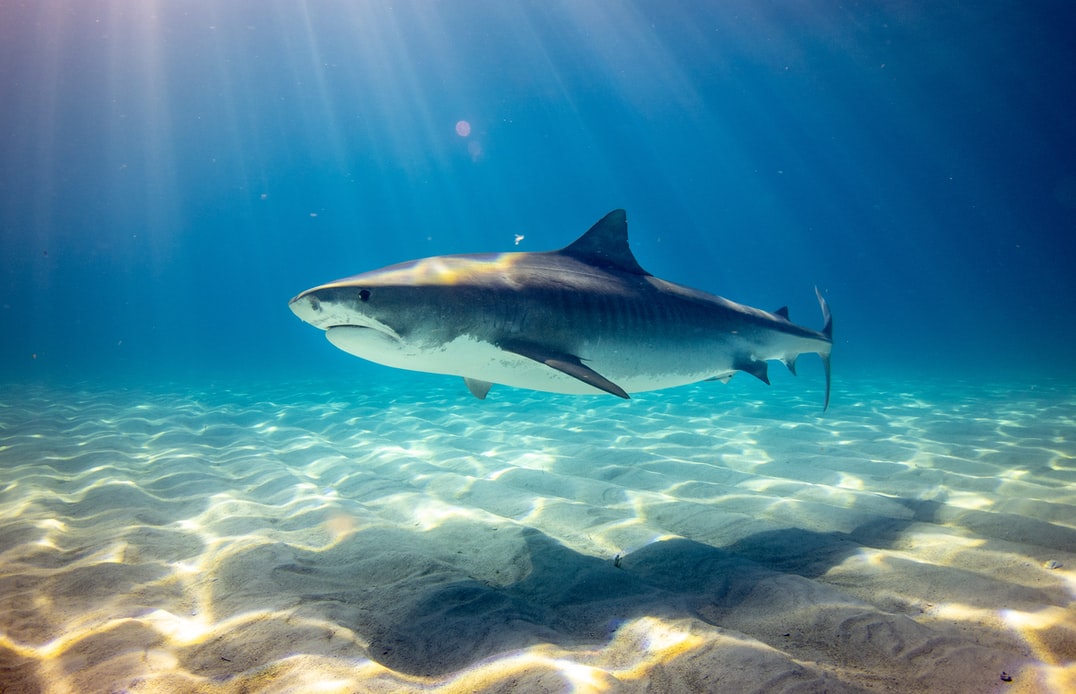 Sharks are beautiful creatures, with an unfair reputation for being vicious, that rule the clear blue waters.

Sharks teach us to keep moving forward to chase our goals and desires like they keep chasing their prey without giving up. They teach us to be active in life and to aggressively pursue our dreams.

Sharks are one of the most dangerous creatures that roam the deep blue ocean, with enormous speed and strength, they are known to be fearsome predators. Sharks are agile and can easily catch up to a prey trying to get away. We love shark quotes and sayings since we can look up to this majestic ocean predator, especially being aware of its reputation under water. We have collected the best shark quotes out there for you which you will absolutely love and enjoy!

If you like this, check out [ocean quotes] and turtle quotes.

Shark Quotes Which You Will Love

1. “I've never been bitten by a shark, though God knows I had to poke a lot of them in the nose.”

2. “The chances of that shark attacking you in any way is so remote. The sea should be enjoyed, the animals in it. When you see a shark underwater, you should say, ‘How lucky I am to see this beautiful animal in his environment!’”

3. “I try my best to avoid the sharks of life, but I have had my share of experiences with them, and in those cases I just have to handle them accordingly. But I do not swim with sharks ... sharks swim with sharks.”

4. “Always you have to train yourself to swim with sharks.”

7. “Are you a man with a conscience, or just a shark who will die when you stop moving forward?”

Funny Shark Quotes That Will Crack You Up

We love hilarious shark quotes! Here are some funny quotes about sharks and some good short quotes that will definitely make you laugh!

10. “Interesting fact: a shark will only attack you if you're wet.”

12. “For an actor, its great fun to play one of these hungry white sharks. Audiences love to hate them.”

13. “You know the most dangerous thing in the water? A shark fart.”

14. “Pigs eat more tuna than all the planet's sharks combined.”

Here are some famous quotes which you will definitely like.

15. “Other fish run from bigger things. That's their instinct. But this fish doesn't run from anything. He doesn't fear.”

16. “And don't you think a wrestling ring is a little old school, Lilian? Why not put the match in a shark tank, with real live sharks? Hungry sharks!”

17. “Without sharks, you take away the apex predator of the ocean, and you destroy the entire food chain.”

19. “We provoke a shark every time we enter the water where sharks happen to be, for we forget: The ocean is not our territory - it's theirs.”

20. “Any weapon's only as good as the man using it, and a good man can make a good weapon out of most anything.”

We love famous shark quotes and facts about sharks. Here are some cool shark quotes that you will enjoy checking out.

22. “Sharks have been swimming the oceans unchallenged for thousands of years; chances are, the species that roams corporate waters will prove just as hardy.”

26. “Turns out, I couldn't catch them - or even get close to them. I realized that sharks are amazing, beautiful animals who have absolutely no interest in checking me out.”

27. “Sharks are the criminals of the sea. Dolphins are the outlaws.”

Quotes About Sharks Which Will Motivate You

Here are some amazing inspirational quotes about sharks!

29. “Instead of squirreling away your earnings early in your career, spend on experiences that will enrich your life - like diving with great white sharks. It can expose you to influential people who could open doors for you.”

32. “I have photographed sharks in waters around the globe, and I always want more and yearn to peer deeper into their world. To feed my passion and to raise awareness, I developed a story about sharks for 'National Geographic' magazine.”

33. “In the end, my love for surfing helped me overcome my fear of sharks.”

34. “I have a ridiculous fear of sharks but I'd jump in the water in a second for an amazing role.”

35. “Were the diver to think on the jaws of the shark, he would never lay hands on the precious pearl.”

36. “There are no true friends in politics. We are all sharks circling, and waiting, for traces of blood to appear in the water.”

Shark Quotes Which Send A Message

“Swimming with sharks”, a popular saying, refers to hanging out or being around dangerous people. Here are some shark quotes which have a deeper meaning and some which send us a message.

37. “You're more likely to drown in the sea of sameness than get eaten by a shark while navigating new waters.”

38. “I just believe that sometimes in life you're like a shark - you have to keep moving through water; otherwise, you'll die.”

39. “There is this sweet spot in time when we have an opportunity to stop killing sharks and tunas and swordfish and other wildlife in the sea before it's too late.”

41. “My position is this. If we can't protect sanctuaries, if we can't save the whales, the sharks, the fish, our oceans will die.”

42. “New England waters are some of my favorite - they are some of the richest waters because they are temperate waters and nutrient-rich, and therefore provide food for so many animals, from giant whales to sharks to everything else.”

43. “One of them hissed-not the hiss of a cat, a long, steady tone-more like the hiss of air escaping the rubber raft that is all that lies between you and a dark sea full of sharks, the hiss of your life leaking out at the seams.”

45. “But as they say about sharks, it's not the ones you see that you have to worry about, it's the ones you don't see.”

46. “I'm always swimming forward like a shark. You just keep going and you don't rest.”

Here at Kidadl, we have carefully created lots of interesting family-friendly quotes for everyone to enjoy! If you liked our suggestions for shark quotes then why not take a look at snake quotes, or lion quotes.