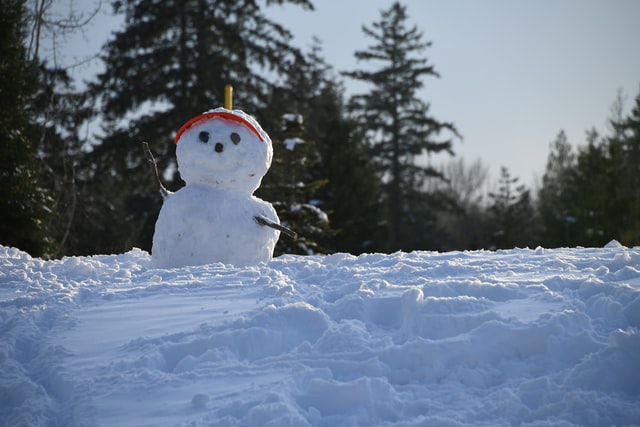 They are round, usually have coal for their eyes and mouth, and a carrot for a nose.

Yes, they are snowmen. Chilly Christmas characters whose worst enemy is the sun.

To find a name for a snowman can be tricky, especially since they don’t last very long. However, the upside to this is that almost any name can be used to christen snowmen. Adding the last name to your snowmen such as McSnowy or McSlushy gives your wintery buddy a persona the kids will love. These activities are often carried out by kids, who love spending winter out in the snow, using their skills and time to create the perfect snowman. One of the best parts of building a snowman is that you can have so much fun with it. Name it anything you want, build it any way you want, the only limit is your imagination, the possibilities are endless. So please do not feel tied down to the names mentioned here, these are just to unlock your Christmas creativity!

Also, check out our articles on Christmas names and winter names for more festive inspiration.

Christmas time is usually the time when Snowmen are made, and they have become an active and fun part of the narrative of the holiday. The snowmen have been referenced in many holiday movies and reappear in pop culture. These fun names have no deep significance and rather focus on instilling the Christmas spirit to young boys and girls, whose creativity knows no bounds. Try and make your snowmen look like the name you have chosen for it, or name it for the way it looks, there are no rules! Find the name that gets you to feel in the spirit of Christmas!

1. Angel McSlushy – A snowman with wings. One of the best name snowman you will find.

2. Arctic No Nose- A snowman without a nose.

3. Berry McSnowy – A few berries on your snowmen and you’re all set!

4. Berry Sparkleton- Get some berries for the eyes!

5. Blitzen Twinkletoes- A fun name to use!

6. Blizzard McBlizzard- A fun name that works after a long blizzard!

7. Candy Sparkleton- Get some candy on your snowmen should do the trick.

8. Carrot Twinkletoes- A carrot-based name, that has a carrot for both arms and nose.

10. Dazzles McBlizzard- A snowman that has glitter all over him. The name of a popular snowman.

11. Eve McFreeze- This works for a snowman who was born on Christmas eve, after an especially cold night.

12. Festive Jollyleaves- A crown of leaves for your snowmen.

13. Fluffy Numb-Toes- Add a pair of fluffy slippers for your snowmen!

14. Gingerbread Button-Nose- A fun name for snowmen with gingerbread nose.

15. Golden Van der Frost- wrapped in gold ornament for a scarf instead.

17. Holly Tinsel- Have fun with some tinsel and Holly.

19. Icy Frozen Shorts- Have fun with a pair of shorts! A cool name to use.

20. Jingle Cuddlepudding- A fun last name that will always keep you smiling.

21. Jingle McSnowy- A name fit for the spirit of Christmas!

22. Jolly McChilly- A fun name for a fun snowman!

23. Joy Bells- A snowman with bells around him that jingle when the wind blows.

24. Lights Snowmanson- A snowman that has lights at the bottom, be sure they don’t melt him!

25. Magic Snowedinski- A fun name the magic of Christmas personified!

26. Merry McSparkles- for a snowman worthy of Sparklers for arms.

27. Mistletoe Jollyleaves- Get him a crown of mistletoe, so he can steal a kiss from you.

28. Misty Winterspice- A fun last name that is made of spice. A lovely name to use for a snowman.

30. Peppermint Cuddlepudding- Get your snowman a peppermint cane.

31. Pinky McBlizzard- A pink scarf for your fun snowman.

32. Pixie Jollyleaves- Get your snowman a head full of leaves. You won't find a better name.

33. Polar Jingle-Shorts- A snowman with shorts on and bells.

34. Robin Cozy- A fun last name that reflects the feeling of Christmas!

35. Robin McChilly- A snowman with a bow and arrow!

36. Rosie McFrosty- A snowman with a rose in his hands. One of the best names you will find.

37. Ruby McJingles- A Red-eyed snowman, a fun name you will love.

39. Sleigh Voncarols- A fun winter name with sleighbells around him.

40. Snowball Winterman- A snowman with a face full of snowballs.

41. Snowflake Holly- A name for a snowman that has a crown of holly.

42. Snuggly McSlushy- A cool name to use that your kids will love!

44. Sprinkles Snowedinski- A name that has colored sprinkles all over him! Watch out for ants!

45. Sugar Voncarols- A snowman showered with a sugar. The best name you will find.

46. Sugarplum BrownBomb- A snowman that has a brown stomach.

47. Sweetie McIcicles- A snowman with Icicles for hands.

48. Teddy McCoal- A fun name with only coal features. An all time favorite.

49. Twinkle Prancealot- Another fun name to use for a shiny snowman!

Snowmen can also be named after your favorite characters from  Lord of the Rings to the Reindeer of Santa Claus and from the seven dwarves of Snow White to Dr. Seuss, How the grinch stole the Christmas winter. Here is a list of characters that you can name your snowman. Again, try and match the character design to your snowman. An activity that will prove to be fun for both nerds, geeks, and kids!

50. Balin- One of the 13 Dwarves of the company of Thorin Oakenshield from 'The Hobbit'.

52. Bashful- One of the seven dwarves from 'Snow White'.

53. Bilbo- The brave burglar Hobbit, the protagonist of 'The Hobbit'.

54. Blitzen- One of Santa's reindeers. Gives you the winter feel.

55. Bofur- One of the 13 Dwarves of the company of Thorin Oakenshield from 'The Hobbit'.

56. Bombur- One of the 13 Dwarves of the company of Thorin Oakenshield from 'The Hobbit'.

57. Bouli- An animated French TV show about a snowman, by the same name.

58. Calvin- From the famous comic, 'Calvin and Hobbes', who builds all kinds of snowmen.

59. Casper– A name for the fun friendly ghost.

60. Chilly- The name of the snowman from the TV show, 'Doc McStuffins'.

61. Cindy Lou– A character in 'How The Grinch Stole Christmas'.

63. Cupid- Santa Claus’s Reindeer. One of the lovely snowman names.

64. Dain- The cousin of Thorin, from 'The Hobbit'. Kids will love this snowman name.

66. Doc- One of the seven dwarves from 'Snow White'. Kids will love this name.

67. Donder- One of the adorable snowman names.

68. Dopey- One of the seven dwarves from 'Snow White'. A cool name for the winter.

69. Dori- One of the 13 Dwarves of the company of Thorin Oakenshield from 'The Hobbit'.

70. Dwalin- One of the 13 Dwarves of the company of Thorin Oakenshield from 'The Hobbit'.

71. Ebenezer Scrooge- The protagonist of 'A Christmas Carol'. The best name choice for the winter.

72. Fili- One of the 13 Dwarves of the company of Thorin Oakenshield from 'The Hobbit'.

73. Frodo- The nephew of Bilbo Baggins. One of the cool snowman names.

74. Gandalf The White- The great wizard, white as snow!

75. Gloin- One of the 13 Dwarves of the company of Thorin Oakenshield from 'The Hobbit'.

76. Grinch- The Main character in 'How The Grinch Stole Christmas'.

77. Grumpy- One of the seven dwarves from 'Snow White'.

78. Happy- One of the seven dwarves from 'Snow White'.

79. Hobbes- Calvin’s pet tiger from 'Calvin And Hobbes'. One of the best snowman names.

80. Jack Frost- From the Movies of the same name. An apt snowman name.

81. Jacob Marley- A ghost from Charles Dickens 'A Christmas Carol'.

82. Johnny- The snowman from 'Oswald'. A lovely snowman name.

83. Kili- One of the 13 Dwarves of the company of Thorin Oakenshield from 'The Hobbi't.

84. Krampus- A mythical creature of folklore, who punishes the naughty children during Christmas.

85. Max- The Grinches’ dog, from 'How The Grinch Stole Christmas'.

86. Michelin man- The mascot from the tire company'. A cool snowmen name.

87. Nori- One of the 13 Dwarves of the company of Thorin Oakenshield from 'The Hobbit'.

88. Oin- One of the 13 Dwarves of the company of Thorin Oakenshield from 'The Hobbit'.

89. Olaf- The delightful and cheerful snowman from Disney’s 'Frozen'!

90. Ori- One of the 13 Dwarves of the company of Thorin Oakenshield from 'The Hobbit'.

93. Sandy Claws- Santa Claus’s from 'The Nightmare Before Christmas'.

94. Sleepy- One of the seven dwarves from 'Snow White'.

95. Thorin- The king under the mountain from 'The Hobbit'.

96. Thrain- the father of Thorin. This is a cool snowman name.

97. Thror- The Grandfather of Thorin.

98. Took- A relative of Bilbo Baggins. A cool snowman name.

100. Zero- Jack Skellington’s Dog, from 'The Nightmare Before Christmas'.

Kidadl has lots of great baby names articles to inspire you. If you liked our suggestions for Turkey Names then why not take a look at Christmas dog names, or for something totally different take a look at chicken names.