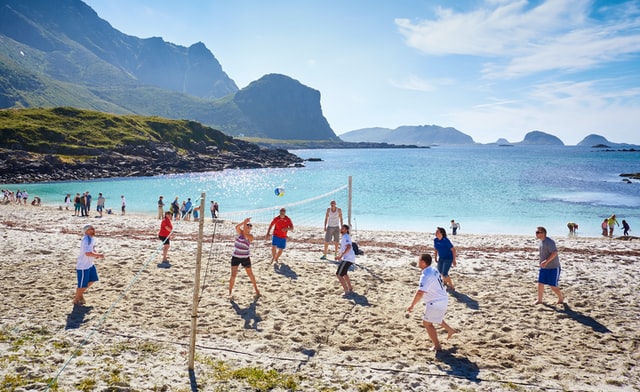 Volleyball is a game in which there are two teams of six players each separated by a net.

A summer sport where you can have fun and play with your family and friends - that's volleyball for you! A great game of thrill and excitement and loved by all.

Forming a volleyball team is a matter of selection and choosing the best players to play for a team. But a team of great players needs some identification, right? And that recognition is given by team names. But it can be quite a difficult job to choose a name that suits your team and as well serves you the right purpose without being any bit offensive. Especially if the team name goes for the long run and would represent in Olympics, you don't want to be among the common ones right? No need to get worried about that as we are here to help you with volleyball inspired team names. Here, we present to you with some creative, unique, funny, interesting, and cool names for your team to win your fans and spectator's hearts.

What's a fun sport without some funny names? Here presenting to you the list of some of the funny team names for volleyball to tickle your funny bone and have a light moment.

3. Ain't That A Sweer Beachball

5. Beavis And Bumphead - This name is associated with 'Beavis and Butthead'.

10. Chewblocka - This name is inspired by Chewbacca of the 'Star Wars' fame.

12. Couch Potatoes - One of the fun good team names for a volleyball team.

14. Hit And Miss - A game of hit and miss gives rise to such a common volleyball name.

21. Red Hot Silly Peppers -This would make up for one of the great fun volleyball team names.

26. Spike Tysons - This makes up for one of the great volleyball puns.

28. That's What She Sets - This name got its inspiration from the famous dialogue 'That's what she said'.

29. Wild Wings - This volleyball team name is inspired by the song 'Wild Thing' by The Troggs.

Doesn't a cool team deserve a cool name? Presenting you the list of some cool and funky volleyball team names which you can call your team.

36. Bumping Maniacs - The players know how to bump and play.

39. Elite Volleyball - One of the great elegant name for a volleyball playing team.

51. On Fire - A good team names for creating a competitive spirit.

55. Safe Sets - A volleyball name for a team that plays it all safe at sets.

57. Set To Kill - Definitely makes up for one of the badass volleyball team names.

62. You Bet We're Set -This name makes up for a great volleyball pun.

Why should boys have all the fun? Girls can play volleyball too and can be even better than boys. Here, is the list of some good volleyball team names for a girl gang.

69. Clever Beachballers - One of the great team names for clever girls playing volleyball.

72. Jenny From The Block

75. Passing Fancy - One of the fancy team names for a girl volleyball team.

76. Serves You Right - The team that always plays their serves right.

78. Setsy Ladies - Ladies that know how to play safe sets.

82. The Powerpuff Girls - One of the cute names for your volleyball girl gang.

84. Victorious Secret - This team name is inspired by 'Victoria Secrets'.

Volleyball sport is played everywhere from backyard to beaches and at the Olympics.  Here, we present to you a fascinating list of some good team names for volleyball playing boys.

91. Dudes - One of the cool names for dudes playing volleyball matches.

92. Empire Spikes Back - One for the Star Wars fans.

94. High Performance - Where the boy's team has only one goal that is to win with top performance. One such player who plays with high performance is Indian volleyball captain, Gurinder Singh.

96. Hit Squad - Where the boy squad always gets to hit hard.

102. Orville Ready Blocker - One of the unique volleyball team's names.

103. Pivot Pivot! - This name is inspired by a famous dialogue 'Pivot!' from the Friends TV series.

Playing on the sand with friends is always fun and when it is volleyball then the fun almost doubles! We present to you this amazing list of some interesting and unique sand team volleyball names.

120. Extreme Power - A team that always get their strikes right with great power.

134. Sand Blasters - One of the cool sand volleyball names for a team.

138. Shark Attack - This name is inspired by the movie 'Shark Attack'.

140. Sloppy Blocks - This team has no plans for a block party.

143. The Sand Slingers - One of the good team names for sand volleyball players and for teams that love beaches a little too much for their own good.

Kidadl has lots of great names articles to inspire you. If you liked our suggestions for Volleyball Team Names then why not take a look at something different like Soccer Team Names, or [Running Team Names].

9 Tips For Parents To Help Siblings Get Along
Annabelle Beaumont
No items found.