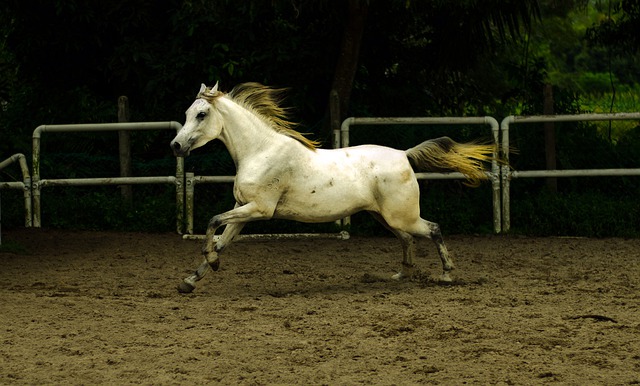 Throughout history, horses have always been close to humans, so it’s no surprise that there is a long list of interesting war horse names that are popular across the globe.

Horses are beautiful, graceful, strong, and fast animals and have many uses. One of their earliest uses was warfare, where they would help win many battles and lead emperors, generals, and armies to victory.

Usually, oriental horses were used heavily as war horses. These were extremely popular among powerful emperors thanks to their speed, agility, and endurance. During wars, these horses were used on the battlefield for carrying messengers, wounded soldiers, as well as for transporting artillery and pulling wagons. The ancestry of the modern Arabian, Akhal-Teke, and Bard horses can be traced back to these horses, making these names especially perfect for any of those breeds.

If you choose to name your horse after war horse names, it implies that your horse is strong, fast, intelligent, and is capable of achieving great things – maybe even conquer nations!

If you want to find out more about unique and interesting horse names, make sure to check out Native American horse names and mythical horse names.

It’s not just the stallions but the mares who can fight and run like nothing you’ve seen before. From both real-life history and literature, check out these female war horse names below.

2. Bela (Italian origin) meaning “beautiful”. She is a horse in the famous ‘The Wheel of Time’ series.

3. Cigarette (English origin) was the name of a horse from Mary O’Hara’s novel ‘My Friend Flicka’.

4. Flame (English origin) was the name of a horse from ‘The Black Stallion’ series.

5. Flicka (English origin) was the horse which the novel ‘My Friend Flicka’ revolves around.

6. Gypsy (English origin) was the beautiful titular character in ‘Gypsy From Nowhere’ by Sharon Wagner.

7. Kasztanka (Polish origin) meaning “chestnut” was Marshal Jozef Pilsudski, a Polish war heroes mare. She was brown, chestnut color and fought viciously with her master during the First World War.

9. Tornado (English origin) was the horse that the iconic character of Zorro rode in many films and series. An apt name for a fast, big horse.

Male horse war names often inspire awe and wonder as they tend to be a reflection of the strength, endurance, and agility that the horses possess. Below, you have a list of some of the most popular war horses.

10. Altivo (Spanish origin) meaning “haughty” or “arrogant”. This was the war horse name of Cortez in the animated movie ‘The Road to El Dorado’.

11. Argo (Greek origin) was the horse that was made popular in ‘Xena: Warrior Princess’.

12. Blueskin (English origin) was a horse belonging to George Washington, A half-Arabian horse, he fought during the American Revolutionary war.

13. Bucephalus (Greek origin), derived from the words “bous” which means “ox” and “kephalos” which means “head”. He was the horse of Alexander the Great and one of the most well-known horses in history. He is said to be very large in size, and black in color with a huge, white star on the forehead.

14. Chetak (Indian origin) was the horse of Maharana Pratap, a Rajput king in North India. After succumbing to his injuries, the king built a large statue in his beloved horse’s owner. The statue still stands today in Haldighati in Rajasthan.

15. Cincinnati (English origin) was named after the state of Cincinnati in the U.S., this was one of the horses belonging to Union General Ulysses Grant, and he fought valiantly during the Civil War. He is also the son of one of the fastest horses in the U.S. at the time, Lexington. One of the popular Civil War horse names.

16. Comanche (Uto-Aztecan origin) was a war horse bought by the U.S. Army in 1868. Comanche was named after the North American Indian tribe who strongly resisted the white settlers. He was given his name by Captain Myles Keogh who used him as a personal mount.

18. Copenhagen (Danish origin) was a war horse named in honor of the Second Battle of Copenhagen, which was won by the British. The most famous day in Copenhagen’s life was on June 18, 1815, when their opponent Napoleon Bonaparte was defeated in the Battle of Waterloo.

19. Klinger (English origin) was a war horse that was owned by the U.S. Army. Klinger served as a wheel horse.

20. Marengo (Latin origin) meaning “of the sea”. He was an Arabian stallion and one of Napoleon Bonaparte’s most famous and most favorite horses. He was named in honor of the Battle of Morango, which was fought between Austria and France. When the French were defeated in the Battle of Waterloo, Marengo was captured by the British, and he lived in England till 1831.

22. Palomo (Spanish origin) meaning “dove” or “pigeon”. Palomo was a white horse belonging to Simon Bolivar, who is known as the liberator of Latin America. Palomo was gifted to him by a local peasant woman.

25. Scipio (Greek origin), from the Heroes of Olympus series by Rick Riordan.

26. Smiler (English origin) was the name of the war horse belonging to Theon Greyjoy in the ‘Game of Thrones’ series, particularly in ‘A Song of Ice and Fire’.

27. Stranger (English origin), this was a war horse name given to Sandor Clegane’s horse in ‘A Song of Ice and Fire’.

28. Tencendur (French origin) meaning “strife”. This was the name of the horse belonging to King Charlamagne in the French epic ‘The Song of Roland’.

29. Thowra (Aboriginal origin) meaning “wind” or “breezy”. A famous stallion in the movie ‘The Silver Brumby’.

31. Traveler (English origin), this was one of the horses of Confederate General Robert E Lee, and he fought with his master during the American Civil War. He was said to have a “rapid, springy walk” and a kind, energetic personality, apart from his incredible strength and speed. If you admire General Robert E Lee, this is a cool name.

Looking to give your horse a famous horse name? Check these out below.

33. Abelard (Hebrew origin), the name of a pony or small horse in the ‘Ranger’s Apprentice’ series.

35. Arondel (Old English origin) seems to be derived from the name Arundel which means “valley of eagles”. This was a horse in the romance novel ‘Bevis of Hampton’.

36. Artax (English origin), this was the name of Atreyu’s horse in ‘The Neverending Story’.

37. Azul (Spanish origin) meaning “blue”. This was the name of a horse in ‘The Alchemical Blue’.

42. Bronze (English origin) from ‘Creatures of Light and Darkness’.

43. Castor (Greek origin) meaning “beaver”. This was the name of a Shire horse in ‘The Dark is Rising Sequence’, written by Susan Cooper.

44. Chretienne (English origin) from ‘The Malloreon’ by David Edding.

46. Florian (Latin origin) seems to be derived from “flora” meaning “flower”. A horse in the novel ‘Florian: The Emperor’s Stallion’.

50. Glory (English origin) from a short story by Gene Markey.

56. Man ‘O War (English origin), considered one of the best racehorses of all time.

61. Persephone (Greek origin) a horse in the ‘House of Night’ series by PC Cast and Kristen Cast.

62. Pilgrim (English origin) from the book and movie ‘The Horse Whisperer’.

63. Pips (English origin) a horse belonging to Matrim Cauthon in ‘Wheel of Time’.

64. Raksh (Indian origin) the name of Rostam’s horse in ‘Shanameh’.

72. Thunderhead (English origin), the son of Flicka from ‘My Friend Flicka’.

There are plenty of famous war horses based on mythical horses who have won many battles. These are some of the most famous mythical horses known all over the world. Fun fact: did you know that Poseidon is the god of horses, as well as the sea?

77. Al-buraq (Arabic origin), a steed that is said to be responsible for the transportation of prophets.

79. Balius (Greek origin), one of Achilles’ horses in Greek mythology.

83. Glad (Norse origin), the name of a famous horse in Norse mythology.

86. Hengroen (English origin), according to Arthurian legend, this was King Arthur’s horse.

87. Hippocampus (Greek origin), this was a sea horse that pulled the chariot of Poseidon.

94. Phaethon (Greek origin), one of Eos, the dawn Goddess’ horses.

97. Sleipnir (Norse origin), the steed of Odin according to Norse mythology.

98. Sterope (Greek origin), the horse of Helios, the Sun God.

99. Tulpar (Turkish origin), known as winged horses in Turkey and nearby regions.

101. Xanthos (Greek origin), one of Achilles’s horses in Greek myths.

Kidadl has lots of great names articles to inspire you. If you liked our suggestions for war horse names, then why not take a look at something different like female horse names or male horse names.