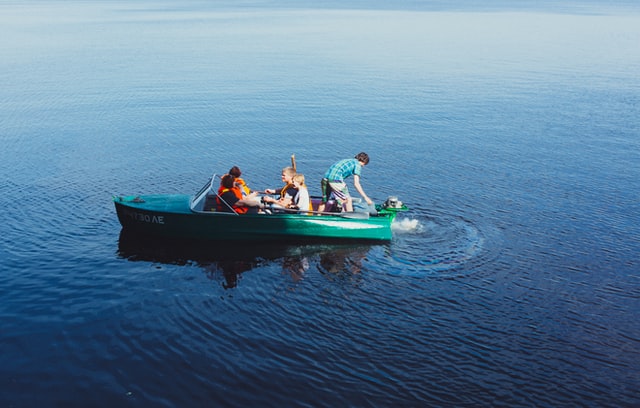 Are you looking for to learn about different boat names throughout history?

Or perhaps you want some boat name inspiration for your own boat? Well you should 'Seas The Day' and take a look at this great list!

This list of the best boat names from history, nature and fiction is bound to include a few choices that will inspire you, it is full of 100 boat names all categorised by type to make your life that little bit easier.

The most common boat name, unsurprisingly, is the punny moniker 'Seas The Day'. This is a great name, but you may be looking for something that stands out a little more, so look beyond 'Seas The Day' with this great list!

If you still need more ideas to name a boat, check out our lists of Pirate Ship Names and Funny Boat Names too.

There have been some boats that have made history and their names will always be remembered. Whilst they may not be the best boat names for your own boat, they have certainly made history and are so interesting to read and learn about. If you see SS in any of these names, it stands for Steamship.

3. CSS Hunley (English origin) the ship designed to sink Union Navy ships, this was built in 1863.

5. HMAV Bounty (American origin) this small merchant vessel was purchased by the Royal Navy in 1787.

7. HMS Victory (English origin) one of the largest wooden warships built to serve two fleets from Spain and France.

8. Mayflower (English origin) a ship that brought English pilgrims to the New World in 1620

9. Nina (Spanish origin) the name of a Spanish ship used by Christopher Columbus.

10. Noah’s Ark (Hebrew origin) this is the ship that saved two of every animal during the great flood in the Bible.

15. SS Edmund Fitzgerald (English origin) this ship was an American Great Lakes freighter. It tragically sank in a storm in 1975.

17. USS Arizona (English origin) a US Navy battleship which was victim to an explosion in World War II.

19. USS Missouri (English origin) also known as the ‘Mighty Mo’, this is the ship where some documents that ended World War II were signed.

20. Whydah Gally (African origin) built as a passenger, cargo and slave ship it became a famous pirate ship after being captured.

A lot of famous ships have graced our screens and the pages of our favorite books. These fictional ships make the best boat names to learn more about. Enjoy this list of the best fictional boat names!

26. Artemis (Roman origin) from the book ‘Voyager’, this makes for one of the coolest names for a boat.

29. Black Pearl (English origin) from the movie ‘Pirates Of The Caribbean’, one of the most famous names for a boat.

32. Britannia (English origin) from the literature work ‘In Search Of The Castaways’.

34. Dawn Treader (English origin) from the movie ‘Chronicles Of Narnia’.

35. Dazzler (English origin) from the book ‘The Cruise Of The Dazzler’.

37. Flying Dutchman (English origin) from the ‘Pirates Of The Caribbean’.

38. General Grant (English origin)  from the book ‘Around The World In 80 Days’.

40. Grossadler (English origin) from the story 'Bright Blade Of Courage'.

41. HMS Dauntless (English origin) from the movie ‘Pirates Of The Caribbean’.

42. HMS Endeavor (English origin) from the movie ‘Pirates Of The Caribbean’.

43. HMS Interceptor (English origin) from the movie ‘Pirates Of The Caribbean’.

47. Queen Anne’s Revenge (English origin) from the movie ‘Pirates Of The Caribbean’.

49. The Empress (English origin) from the movie ‘Pirates Of The Caribbean’.

50. The Henrietta (English origin) from the movie ‘Around The World In 80 Days’.

51. The Inferno (English origin) from the movie ‘The Goonie’.

If you are looking for something simple and sophisticated for boat naming, the natural environment and the people around you it is the best place to get inspiration for naming your boat. These names for ships come naturally and never go out of taste. The best boat names that are classy are on this list. You might fancy calling your boat USS to sound like the famous ones, but sadly you can't - this prefix is only use for commissioned ships of the United States Navy.

61. Baroness (French origin) is a title for the wife or widow of a Baron.

62. Elizabethan (English origin) refers to the reign of Queen Elizabeth I.

63. Exodus (Greek origin) means "the exit of a large group".

71. The Admiral (English origin) means "commander of the sea".

72. The Baron (French origin) a status denoting a person of rank.

74. The Icelandic (English origin) refers to the country of Iceland.

75. The Olympian (Greek origin) meaning "a participant in the Olympic games".

76. The Sapphire (English origin) a jewel and the birthstone for September.

Funny boat naming is a great way to express your sense of humor. Boat owners who have a luxury yacht can give their boats some out of the box names. Nothing compliments your sense of humor better than a clever name for your new boat or luxury yacht. Here are some funny names of boats to get you thinking of your unique yet fun boat name.

82. Clam Dunk (English origin) like a slam dunk but with clams instead.

83. Codtastrophe (English origin) a funny play on the words 'cod' and 'catastrophe'.

84. Fish And Ships (English origin) a play on words from the meal fish and chips.

85. Knot On Call (English origin) for boat owners who want to relax when sailing the seas.

86. Looking For Fish (English origin) the perfect boat name for a fishing boat.

88. Nuclear Fishin' (English origin) for boats that are strictly for fishing.

90. Seas The Day (English origin) we couldn't leave the most popular boat name off our list!

91. Reely Expensive (English origin) to show that your boat is very expensive!

92. Rubber Ducky (English origin) reminds you of your childhood.

95. Sick Day (English origin) gives a giggle for those who suffer from sea sickness.

96. Sharkbait (English origin) this boat name can be given to a fishing boat.

97. Tax Refund (English origin) is this boat what you spent your refund on?

98. The Crusty Crab (English origin) the restaurant from the 'Sponge Bob' cartoon.

99. The Other Woman (English origin) if your boat also has your heart.

100. Therapy (English origin) for those who love to relax on their boat.

Kidadl has lots of great names articles to inspire you. If you liked our suggestions for Boat Names from history, nature and fiction, then why not take a look at these Car Names For Girls, or for something different try these Top 100 Winter Storm Names For Your Baby.