68 Facts About Chickens Which Are S-Peck-Tacular 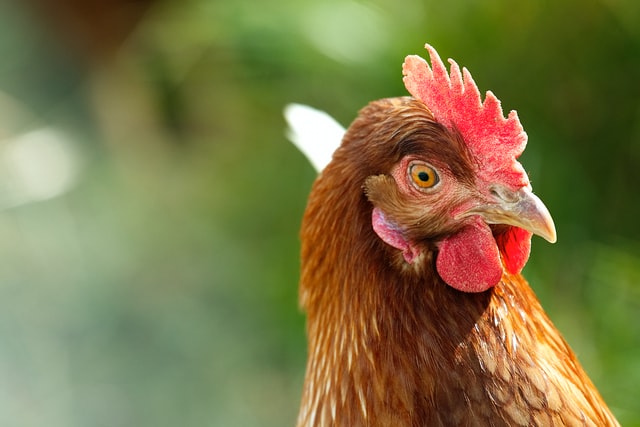 Here at Kidadl, we love to learn!

The world around us is a place of wonder, and there's so much to discover, particularly when it comes to the animal kingdom. If you have animal-mad kids, why not share these amazing Red Squirrel Facts or Bear Facts with them?

Or if you're looking for some bird facts that are really speck-tacular, then dive into this collection of cool facts about chickens.

Let's start with the basic facts on chickens - they're amazing birds!

1. With an estimated total population of 25 billion chickens, there are more chickens in the world than any other species of birds.

2. The chicken is a type of domesticated fowl.

3. The chicken is a subspecies of the red junglefowl, tropical birds found across much of Southeast Asia and parts of South Asia.

4. Depending on the breed, the average chicken can live for five to ten years.

5. Chickens are omnivores just like humans, meaning they can eat a variety of food including plants and animals.

6. In the wild, chickens can be found pecking at the soil to search for seeds, insects and even animals as large as lizards, small snakes or young mice.

7. Chickens know their mothers very early on and can identify them with both sound and vision.

Facts About The History Of Chickens

You might not know that these amazing chickens have been around for centuries!

8. Originally raised for fighting or for special ceremonies, chickens were not kept for food until the Hellenistic period (an era of Mediterranean history between fourth–second centuries BC).

9. The Ancient Greeks believed that lions were afraid of roosters.

10. In the ninth century, Pope Nicholas I ordered the figure of the rooster to be placed on every church steeple.

From chicks to chooks, there are many names the chicken answers to.

12. Adult male chickens of one year and above are called Cocks in the UK and Ireland.

13. But adult male chickens are called Roosters in the United States, Canada, Australia and New Zealand.

14. Male chickens less than a year old are called Cockerels.

15. Female chickens of one year and above are called hens.

16. Female chickens less than a year old are called Pullets.

18. The word Chook is a slang name for chicken used in Australia.

From being featured in everything from advertising to religion, these fun facts about chickens will amaze you.

19. The Gallic rooster is an unofficial national symbol of France.

20. The crest of English football team Tottenham Hotspur features a cockerel sat on top of a ball.

21. PATHÉ, the French entertainment company, features a rooster saying its name as its logo.

22. The Blue Hen is the State Bird of Delaware and the Mascot for the University of Delaware sports teams.

23. The mascot for Kellogg's Corn Flakes cereal is called Cornelius the rooster.

24. The rooster is one of the symbols of the Chinese Zodiac, and is linked to Autumn.

These interesting facts about chickens are sure to surprise you.

25. Chickens are social animals and live together in a flock.

26. Each flock has a hierarchy, called a pecking order, where the dominant chicken gets priority for food and nesting areas.

27. When it's time to mate, certain roosters do a special dance to attract a hen, called "a circle dance."

28. Chickens like the sunshine - they can navigate using the sun and even love to sunbathe!

29. Mother hens are very protective and defend their chicks from predators.

These facts about chickens will make you think!

31. Chickens are more intelligent than people think and show a level of self-awareness.

32. Research has shown that chickens can count and perform basic arithmetic.

33. Chickens can communicate. They have over 30 different vocalizations and each one has its own distinct meaning, like signaling danger.

34. A mother hen starts to teach different calls to her chicks before they even hatch.

36. Chickens have a good memory, and can recognize more than 100 different faces in their flock.

37. Chickens can also recognize people and tell the difference between them. Some say they prefer beautiful faces!

38. Chickens can dream, just like us - we know this because we can see that they experience rapid eye movement (REM) sleep.

39. Chickens have excellent vision and see their environment in full color.

40. Chickens have three eyelids; upper and lower eyelids (like humans) and an eyelid that sweeps in from the side.

41. Chickens have pain receptors meaning they feel pain like we do.

42. Chickens are good runners and, depending on the breed, can run up to nine miles per hour.

43. Chickens cannot fly like an average bird, but can fly for a short time and distance.

44. Chickens shed their feathers when they are stressed or distressed.

45. Chickens have taste buds - they can taste saltiness, but not sweetness.

How do you like your eggs in the morning? These facts about chickens and eggs will make you hungry.

46. In the egg-laying industry, a pullet becomes a hen sooner than usual. She will begin egg-laying between 16 to 20 weeks of age.

47. Hens like to lay their eggs in a quiet place of safety, like a nest or hen house.

48. Hens lay eggs at a certain time, most often early in the morning.

49. Chickens lay different color eggs, depending on the breed, most commonly white and brown.

52. Eggs contain whites and yolks (the yellow part) which are filled with proteins and fat.

54. A hen will often make a loud cackling sound when she has laid an egg.

55. Hens lay larger eggs as they get older, but they lay less of them.

56. Hens’ combs get larger before they start laying eggs.

Have some chicken fun with these amazing facts about chickens for kids.

57. The world's oldest known chicken lived to 16 years old, according to the Guinness World Records.

58. It is possible to hypnotize a chicken, and it will stay hypnotized for up to 30 minutes.

59. The chicken is the T-Rex's closest living relative.

60. When chickens get too hot, they pant just like humans.

61. It's possible to have a chicken phobia - the fear of chickens is called Alektorophobia.

62. The world record for the most yolks in one egg is nine yolks.

63. There are hundreds of breeds of chickens.

64. Chicken breeds can be distinguished by things like size, color of plumage, type of comb, place of origin and even number of toes!

65. Chicken breeds can also be distinguished by their use, or example eggs, meat or ornamental.

66. In the United States, many chicken breeds are named after states, for example, the Jersey Giant and Rhode Island Red.

68. Chickens that are often used on farms, because they're good at producing both meat and eggs, are called dual-purpose breeds.

Here at Kidadl, we have carefully created lots of interesting family-friendly facts for everyone to enjoy! If you liked our suggestions for 68 Facts About Chickens Which Are S-Peck-Tacular, then why not take a look at Shark Facts, or Chihuahua Facts.