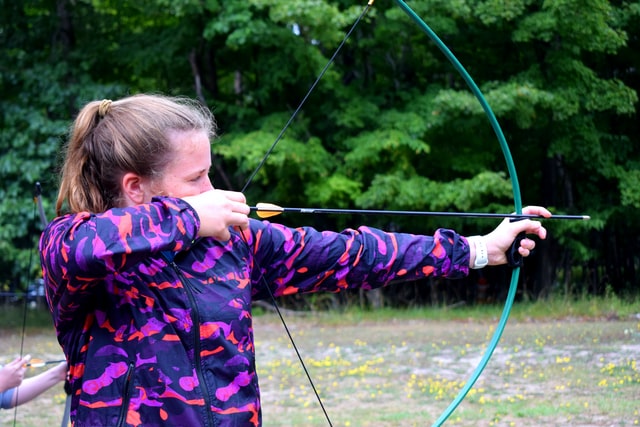 Archers are people skilled with a bow and arrow, either as a form of protection or for sports.

Female archers have gained some recognition in the scene of archery, as it was one of the few sports that permitted female participation at the early onset. It is a skill that requires focus and precision.

Archeress is a term found in most modern dictionaries and is simply defined as a female archer. However, women in this line simply prefer to call themselves archers. The word archer is a good enough name for people in this field because it does not discriminate based on gender. In this list, you will find fantasy girl names and get to know the best archers in history.

We also have female knight names and sassy girl names that are well worth the read.

In certain mythologies, the weapon of choice was a bow and arrow used as a form of protection or to hunt wild animals. Some of history's legendary archers were female, and they were also very skilled. A lot of them were warriors who fought and even lead battles against enemy nations, leading their people to victory. These women possessed great archery skills and were known for their talent. Take a look below for the best female archers names that are suitable for your female child.

1. Artemis, the daughter of Zeus and the goddess of the hunt in Greek mythology. She is one of the most respected gods and is a skilled archer.

2. Atalanta, a huntress and a skilled archer in Greek mythology, often beating men in sporting events.

3. Diana, is the Roman goddess of the hunt and had excellent archery skills. She defied all odds and showed how exemplary women could be in certain areas.

4. Skadi, according to Norse mythology is the goddess associated with archery. She is the goddess of bowhunting, archery, and skiing. She was also worshipped by the Vikings for her excellent skills.

5. The Amazons, were expert warriors skilled in the use of various weapons including the bow and arrow. There has been some evidence to show that they were real and not made up.

The big screen has brought some of our favorite fantasy archers from movies, TV shows, comics, and even animes. The name Katniss Everdeen will ring a bell from the hugely popular book and movie franchise 'The Hunger Games.' The list also has anime archers, your favorite archers in movies, and also lovely female fantasy names that you will love. Check the list for archery characters from shows, movies, books, and everything in between. You can also fine the right name for an archer if you plan on doing some fictional work.

6. Abigail Whistler, a character from 'Blade:Trinity'.

8. Fa Mulan, the main character in the animation 'Mulan'.

9. Guinevere, other than being the kings love she was an archer from the movie 'King Arthur'.

11. Hawkeye, also known as Kate Bishop from the fictional comic series the 'Marvel Universe' and is part of the young avengers.

13. Inara Serra, a character from the sci-fi series 'Firefly'.

14. Kagome Higurashi, a character in the manga and anime series 'InuYasha'.

15. Karai, a character from the 'Teenage Mutant Ninja Turtles'.

16. Katniss Everdeen, the main star of the show from 'The Hunger Games' franchise.

17. Kikyo, a  prophetess who was bad but later turned good from the anime series 'InuYasha'.

18. Kimberly Hart, one of the original rangers from the 'Power Rangers' franchise who was the Pink Ranger.

19. Lara Croft, the very famous tomb raider and daughter of an archaeologist, from 'Tomb Raider'.

20. Neytiri te Tskaha, the daughter of the clan leader from the movie 'Avatar'.

22. Princess Merida, a rebel princess from the animation 'Brave'.

23. Princess Zelda, a playable character from the game series 'The Legend of Zelda'.

24. Queen Victoria, of England from the Victorian era. When she became queen she renamed the archery club.

26. Sara Lance, a character from the series 'Arrow'.

27. Susan Pevensie, a popular archer from the novel 'The Lion, the Witch, and the Wardrobe,' later made into a movie titled 'The Chronicles of Narnia'.

28. Thea Queen, the sister of Oliver Queen from the series 'Arrow'.

Archer is one of the most competitive sports in the world today, especially among women. The best archer in the women category is Kim Soo-Nyung from South Korea. Women also hunt wild animals and are some of the top leading big game hunters in the world. Here are the famous archers from sports who have won medals to show for their excellent marksmanship. These are lovely names for archers as well.

31. Alison Williamson, from Great Britain and represented her country in the 2004 Olympic games.

32. Barbara Mensing, contested in the German team during an Olympic game.

33. Bérengère Schuh, was part of the Olympic French team.

34. Chang Hye-jin, one of the tip good medalist from South Korea.

36. Cheng Ming, one of the winners who played in the Chinese team.

40. Deborah Ochs, a member of the United States team.

41. Denise Parker, also a member of the United States team.

49. Kaori Kawanaka, was part of the Japanese team.

50. Kateryna Serdyuk, was part of the Ukrainian team.

51. Keto Losaberidze, from the Soviet Union.

52. Khatuna Kvrivichvili, played for the Unified team in 1992.

58. Kim Soo-nyung, from  South Korea, a three-time winner, holding the title of best of all time.

61. Le Chien-ying, member of the Chinese Taipei team in the 2016 Olympics held in Rio.

72. Melanie Skillman, a member of the United States team.

76. Natalya Butuzova, from the Soviet Union.

81. Ren Hayakawa, was part of the Japanese team.

84. Sophie Dodemont, was part of the French team.

85. Tan Ya-ting, was part of the Chinese Taipei team.

87. Valentyna Kovpan, from the Soviet Union.

90. Wang Hong, was part of the Chinese team.

100. Zebiniso Rustamova, from the Soviet Union.

We hope this list of female archer names has shown you just how many options there are out there for your child! If this wasn't up your street then Kidadl has lots of great baby names articles to inspire you. If you liked our suggestions for female archer names From mythology, fiction, and sports then why not take a look at something different like Troll Names or Blood Elf Names.