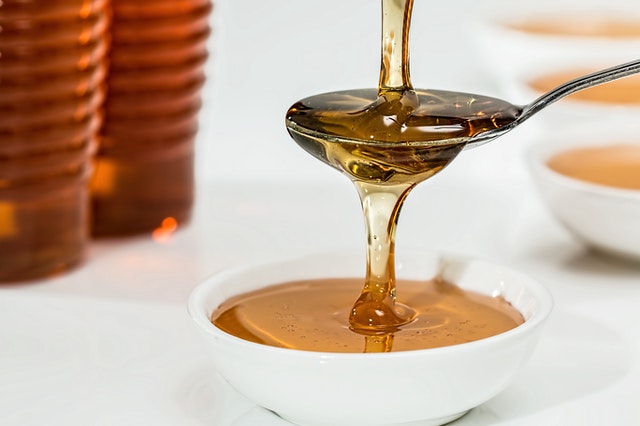 Honey is a sweet, beautiful and golden syrup which you can use for so many things!

Honey bees started producing the precious nectar millions of years ago, and it takes countless of them to produce a single pound of honey. This list of facts will teach you everything you need to know about honey, the bees that make it, their life in the hive, and much more!

If you want more fun facts or are after some educational entertainment, then you should definitely take a look at our list of facts about flowers or these facts about spring.

If you are a fan of the golden nectar, then you will want to know everything there is to know about it. We've got you covered with this bee-rilliant list of fun facts to entertain your kids and make them bee-hive!

1. Honey never spoils! As long as you keep it in an airtight container, it is one of the few foods that has an eternal shelf life. This is because it is naturally very acidic and has low moisture levels, so bacteria like mould which would make it go bad struggle to grow in it.

2. Sometimes, in food production, honey is cut with cheaper sugars and syrups before being sold as pure honey, this is called Honey Laundering.

3. In 2012, some French beekeepers discovered blue and green honey, this was because bees were collecting pollen in the waste from a factory producing M&Ms!

4. There exist different flavors of honey depending on where the bees collect pollen from! Eucalyptus honey tastes a bit like menthol, while honey from flowers tastes sweeter.

5. The color of honey can also vary depending on its origin! In the South East of the USA, some bees have been known to produce deep purple honey, but scientists are unsure why.

6. Honey is great for the environment. Pollination, which is what happens when bees gather nectar and inseminate flowers, is essential for crops and vegetation to keep reproducing and growing.

7. In turn, this is great for the economy, it is estimated that bees pollinate $20 billion worth of US crops every year.

8. If you are interesting in beekeeping and making your own honey, you can now purchase bee hive kits or even make your own DIY hive!

10. In order to produce one pound of honey, a honey bee has to collect nectar from about 2 million flowers, and fly over 55 000 miles. To give you an idea, 55 000 miles is more than double the Earth's circumference!

12. As bees consume some of the honey they produce in winter in order to survive, beekeepers only harvest what is extra. Sometimes, they will even feed the bees some sugar syrup to compensate for the honey they take from the hive!

13. There are over 20,000 species of bees on the planet, and not all of them make honey. In fact, very few do, there are only seven known species of honey bees, and the honey bee used for commercial beekeeping in the USA is called Apis mellifera.

14. Honey bees don't only give us honey: Royal Jelly, honeycomb and beeswax are example of things made with honey and produced by bees.

16. Not all honey is made by bees! The Mexican honey wasp can also produce honey. However, their honey can sometimes be poisonous due to the types of flowers that the wasps visit!

Here is a fun fact about bees: they don't only produce honey! They also give us a geometrical wax structure called honeycomb.

17. Honeycomb is a group of hexagonal cells built by bees from wax. It is used to store the bees' larvae but also honey and pollen.

18. Beekeepers remove the entire honeycomb when they harvest honey, and replace it once the honey has been extracted thanks to a machine which keeps the structure of the honeycomb intact!

19. Honey bees have to consume 8.4 pounds of honey to produce one pound of wax.

Honey is not only delicious, it is also very good for your health! Below are some of the reasons you should not hesitate to eat lots of this sweet golden nectar.

20. Honey has medicinal properties, in fact it was prescribed as medicine even in ancient Mesopotamia. This is because honey is an anti-bacterial substance, so it was used to protect injuries from infection.

21. Honey is the only known food which has all the elements and nutrients to keep you alive. It contains water, minerals, vitamins, and all the necessary enzymes to give the body energy.

22. Honey is a great source of antioxidants, which can prevent or slow damage to cells caused by environmental or other pressures.

23. Honey contains an antioxidant called Pinocembrin which improves the functioning of the brain.

24. Honey can be useful if you suffer with seasonal allergies, it can help develop immunity to local plants which trigger allergies.

25. Due to its antibacterial properties, honey is still used as a treatment today for conditions such as stomach ulcers or cuts and burns.

26. Honey is a naturally soothing substance, so it is often used in beauty products like shampoos and conditioners to reduce irritations and dandruff.

27. Honey is more effective at soothing coughs and sore throats than many syrups you can buy over the counter.

The history of honey is a long and fascinating one! Take a look below at some historical fun facts about the precious nectar.

28. Honey is not a new thing, there is evidence that bees have been producing honey for millions of years. Archeologists found fossilized honeycomb dating back to three million years ago!

29. Even if bees have been producing honey for millions of years, humans have only been harvesting it for thousands of years. An ancient cave painting which could be up to 15 000 years old was found in Valencia (Spain) and shows a human harvesting honey from a hive.

30. A search of an Egyptian tomb revealed honey which was 3000 years old, it was not spoiled and still edible!

31. Honey used to be a very precious commodity in Medieval Europe. In Germany,  in the eleventh century, Lords asked their peasants to pay them in honey and beeswax. Honey was often used to sweeten beer at the time.

Here at Kidadl, we have carefully created lots of interesting family-friendly facts for everyone to enjoy! If you liked our suggestions of incredible honey facts that you just won't bee-lieve, then why not take a look at these dandelion facts, or protein facts too?