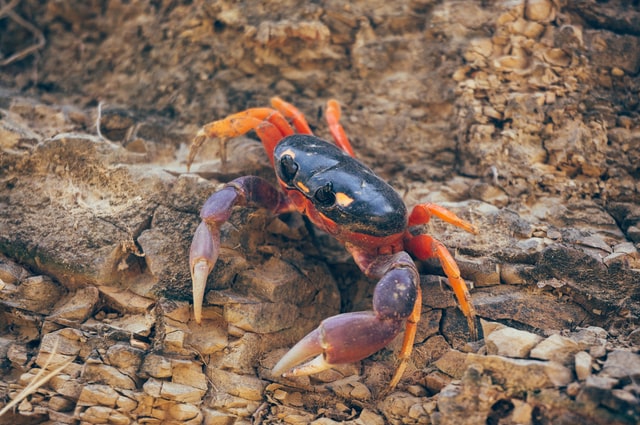 Have you ever wanted to know more about the fascinating blue crab (callinectes sapidus)?

Like what their Latin name means, how to tell a male from a female or why these crabs with blue claws are so important to the waters they live in? If you want to learn more about the blue crabs from Maryland then we've got all the info.

If you want to learn more about amazing creatures, why not take a look at our list of toucan facts, or keep learning about sea creatures with our facts about jellyfish.

The blue crab is totally enchanting, and these blue crab fun facts are some of our favourite.

1. The average blue crab life span is between one and three years.

2. Scientists believe that if they weren't harvested for food and were in the best possible circumstances, they would be able to live for up to eight years.

3. The scientific name for a blue crab is Callinectes Sapidus.

4. The blue crab belongs to the  Portunidae family.

5. Portunidae is the name for this family of swimming crustaceans.

6. Unlike all other members of the Portunidae family, the blue crab does not have a spine inside its claws.

7. The size of a blue crab is roughly nine inches wide and four inches long.

8. They typically weigh between one and two pounds.

9. Even though blue is in their name, the shell of the crab is a mottled brown colour.

10. The blue crab is named after its bright blue claws.

11. A female blue crab will have red highlights on her claws.

12. The blue crab has four teeth at the front of its mouth.

13. The claws of a blue crab are called chelipeds.

14. They are close relatives to the shrimp and lobster families.

15. The blue crab is an excellent swimmer, with hind legs that are shaped like paddles.

16. The blue crab is a member of the decapod family of crustaceans, which means they have 10 legs.

18. Blue crabs are sexually dimorphic, which means that the male and female blue crab look different from each other.

19. You can tell the sex and age of a blue crab by looking at it's apron (the folded skin on its underside).

20. Male blue crabs have a T-shaped fold and females have a triangle that becomes rounded as they get older.

21. The scientific name of the crab honors the scientist Mary Jane Rathbun, who was the first to describe the species in the year 1896.
‍

All your questions answered about how blue crabs mate and grow into their adult selves, and the troubles they face along the way.

22. The mating season for blue crabs is between May and October.

23. Once they mate, the female blue crab develops an egg mass beneath her apron in her crab egg sack, which looks like a sponge.

24. The egg mass can contain up to two million blue crab eggs.

25. After two weeks of growing the two million eggs, the female crab releases them into the water so that they can grow to their full size.

26. When the female crab is ready to take her mature form, the male crab defends her against any threats, and once she has transformed or molted into her mature body they mate.

27. This means that the male blue crab will mate with the female when her shell is soft and not hard.

28. After the mating process, males stay in the brackish water and females go to water that has the highest salinity content (level of salt) to give birth.

29. When she's ready to release her larvae so they can hatch, the crab travels to the mouth of the nearest estuary.

30. Baby blue crabs are born in the ocean, and make their way back to salt marshes and estuaries like Chesapeake bay and Maryland.

31. At first, the egg mass of up to two million eggs is orange, but you can tell when it is near to hatching because it turns black.

32. The larvae of the blue crab molts over 25 times, which means it outgrows its body and sheds it to grow a bigger one.

33. Crabs take around 12 months to mature to their adult size when they are in warm water like the sea in Nova Scotia or the Gulf of Mexico.

34. In water that is less warm, it can take up to 18 months for crabs to reach their mature size.

35. It can be very hard for the crabs to survive while they're growing to their full size, as lots of them are eaten by predators.

You might be surprised to know that crabs move around during their lives. Roaming from Chesapeake Bay all the way to the coast of Greece, here is all you need to know about blue crab habitats.

36. Blue crabs are native to the northern coast of the Atlantic.

38. You will be most likely to find a blue crab in the lagoons and estuaries between Nova Scotia and the Gulf of Mexico.

39. They are bottom dwellers which means that the blue crab likes to live on the bottom of the ocean floor.

41. Blue crabs have also been found as far down the coast as Uruguay, and are regularly caught there too.

42. You used to find a lot of these snappy creatures in Chesapeake Bay but recently there has been a severe decline because of the over harvesting that is taking place.

43. Some crabs have stowed away on ships and appeared in the Mediterranean, Black, North and Baltic sea.

44. They are now commonly found in the European and Japanese coastlines as well as their original habitats.

45. In 2012, Louisiana became the first blue crab fishery to be sustainable, after there were reports of a severe decline in the amount of the crabs in the waters.

46. Because of the crabs being harvested so much, the Maryland Department of National Resources put lots of stricter guidelines on what you can and can't do when you fish for the crabs, with the hope that they can increase the population.

47. The measures the Maryland Department of National Resources put in place include limiting the times and days that the crabs can be caught, and only allowing crabs over a certain size to be caught for food.

48. Climate change, disease, over harvesting and pollution are all threats to the population, because changes to weather and water temperature mean that some struggle to survive.

50. Birds and mammals that eat the crab species include herons, racoons and diving ducks.

51. The endangered Kemp's Ridley sea turtle migrates to Chesapeake Bay every summer, and likes to indulge in as many of the crab species as it can find, as they are its favorite food.

52. In Chesapeake Bay, the life expectancy for the crabs that survive their first year is between two and a half to three years. After this they are usually harvested for food.

Facts About The Blue Crab's Diet

Are you wondering what blue crabs eat? We've got all the facts on blue crab food sources for you. It turns out our sapphire friends will eat pretty much anything, including dead fish!

54. Blue crabs aren't fussy eaters - they will eat almost anything they can access.

56. Blue crabs also eat dead fish and other blue crabs if they are smaller than them.

57. Blue crabs play a key part in the population control of animals that they eat, which means that when they are over harvested there is a big effect on the ecosystem.

If you love this tasty shellfish treat, we're pretty sure you're going to enjoy these culinary facts about blue crabs.

58. The blue crab is widely known for its sweet and tender meat.

59. The scientific name Callinectes Sapidus Rathbun translates to "savory beautiful swimmer," because they are so tasty!

60. Sometimes these crustaceans are called soft shelled crabs in a restaurant, because you can eat their whole shell.

61. Up to 90% of the crabs caught are sold to restaurants in the Chesapeake Bay area.

62. The crabs are sold to restaurants when they are still alive so that they taste as fresh as possible.

63. Blue crab is one of the most harvested creatures in the entire world.

64. When you cook a blue crab, the blue pigment in their claws is deactivated by the heat, which means that they turn red.

65. Even though they are a very important catch for fishermen because they are so popular to eat, overfishing can cause many negative effects on the ecosystem.

66. Because there is such a high demand for this tasty delicacy, a related species which is named the blue swimming crab is imported from Asia to the US.

67. Over 70% of all the crabmeat sold in the US. contains at least some imported meat.

Here at Kidadl, we have carefully created lots of interesting family-friendly facts for everyone to enjoy! If you liked our incredible Maryland Blue Crab facts then why not take a look at our extensive list of clownfish facts or these amazing facts about sharks?