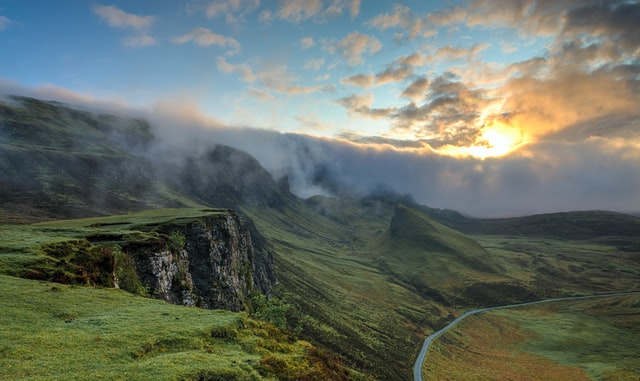 Paganism stands for the religion that preceded Christianity, where one worships nature, essentially.

The term 'paganism' was extensively used in the fourth century to denote people who believed in polytheism. Though the word 'paganism' is seen in a bad light, the Pagan way of life still dominates the Earth through old and new religions.

When we come to modern-day paganism, it usually stands for a religious order that believes in magic and witchcraft. In truth, the core of paganism is about getting attuned with nature. Pagans believe in the power of nature and draw wisdom from the gods that surround them. Pagan inspirational quotes can show you a path towards spirituality. Hence, let us check out some great Pagan quotes.

If you find the Pagan quotes enlightening, do check out Christian quotes about love and spiritual awakening quotes for a deep dive into spirituality.

Pagan quotes can open a path that leads to love and wisdom for the world, self, as well as for others. Pagans believe in getting in touch with mother Earth and cherishing the soil. So, here are some quotes that will help you to get connected to the goddess.

1. "Paganism is that view of life which finds the highest goal of human existence in the healthy and harmonious, and joyous development of existing human faculties."

2. "Paganism is the worship of life itself in its supreme mysteries of ecstasy and love."

3. "Magic, indeed, is all around us, in stones, flowers, stars, the dawn wind and the sunset cloud; all we need is the ability to see and understand."

5. "There is something pagan in me that I cannot shake off. In short, I deny nothing, but doubt everything."

6. "The birth and rebirth of all nature,

The passing of winter and spring,

Rejoice in the magical ring."

7. "The virtue of paganism was strength."

8. "Come fairies, take me out of this dull world, for I would ride with you upon the wind and dance upon the mountains like a flame!"

9. "Nature has her proper interest; and he will know

what it is, who believes and feels, that every Thing

has a Life of its own, and that we are all one Life."

10. "Through the Goddess, we can discover our strength, enlighten our minds, own our bodies, and celebrate our emotions."

11. "Call upon the Goddess and God to protect you and teach you the secrets of magic.

Ask stones and plants to reveal their powers - and listen."

12. "The Gods and Goddesses of myth, legend and fairy tale represent archetypes, real potencies and potentialities deep within the psyche, which, when allowed to flower permit us to be more fully human."

14. "Magic is not always serious or solemn.

It is a joyous celebration and merging with the life-force."

15. "Beware of organizations that proclaim their devotion to the light without embracing, bowing to the dark; for when they idealize half the world they must devalue the rest."

Magic surrounds us and practicing as a witch may not be as hard as it seems. In the oldest of the religions, being a witch connects a person to earth and the nature that makes it. So, here are some Pagan quotes about witches that you are going to love.

16. "Being a witch means living in this world consciously, powerfully, and unapologetically."

17. "Magic, in essence, is the ability to communicate to the universe what you want in an effective way, so that the universe can then respond and create what you desire."

18. "To me, a witch is a woman that is capable of letting her intuition take hold of her actions, that communes with her environment, that isn't afraid of facing challenges."

19. "A witch does not need to fix problems. She fixes the energy around problems."

20. "Witches exist throughout space and time. Witchcraft brings together the magical people throughout the world for the shared goals of justice, liberation, and celebration of the life force of the earth."

21. "A witch is a person who has honestly explored their light and has evolved to celebrate their darkness."

22. "Witches were a bit like cats. They didn't much like one another's company, but they did like to know where all the other witches were, just in case they needed them."

23. "If you learn centredness, confidence, and compassion, magic will amplify those qualities, rather than your fears."

24. "Witches are the original activists. Any time you have something that has to do with empowerment and being free and being wild and being who you are, there's definitely going to be some opposition to that."

25. "It was about finding the sacred within myself, my center, my peaceful core. We each have a sacred space within us, a part of us."

26. "I think that all women are witches, in the sense that a witch is a magical being."

27. "Witchcraft is never cookie-cutter. Like recipes from a book, the recipes are often tailored to individual tastes as long as the general formula and steps are understood."

28. "She ate the stars and swallowed the earth

She is the girl with all the power."

29. "Black magic, the magic of the primeval chaos, blots out or transmogrifies the true form of things."

30. "I feel the nights stretching away

thousands long behind the days

till they reach the darkness where

all of me is ancestor."

Wicca is a form of modern Pagan religion primarily led by women. Wiccans do believe in witchcraft that is done for the good of people. Gerald Brousseau Gardner is said to be the proponent of this nature-based religious path. So, here are some great Pagan quotes from the tradition of Wicca.

32. "We are not on this planet to ask forgiveness of our deities."

33. "The witches are firm believers in reincarnation, and they say that once a witch always a witch."

34. "Among the many aspects of Wicca that distinguish it from other, more widely recognized religions is its emphasis on the feminine, as symbolized by nature, the Earth, the Moon, and feminine deities (or goddesses)."

35. "This planet is our home. Our life and hers are interdependent."

36. "An experienced witch takes magical action based on inspiration, not desperation."

37. "Magic is love. All magic should be performed out of love."

39. "Magic is our birthright...and should be available to all who wish to utilize it as a tool of personal transformation."

40. "'Magic' is a word used for the phenomena that occur when people consciously participate in the co-creative forces of the Universe."

41. "Trees have from time immemorial been closely associated with magic."

Here at Kidadl, we have carefully created lots of interesting family-friendly quotes for everyone to enjoy! If you liked our suggestions for Pagan quotes, then why not take a look at [Palm Sunday quotes], and Easter Bible quotes?