35 Karate Quotes For All The Martial Arts Fans 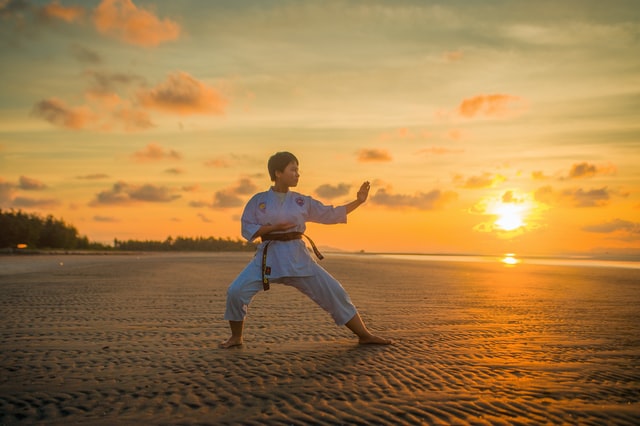 Karate is a form of Martial arts using kicking, punching, and other kinds of defense styles.

Many people learn the art of self-defense. It even builds their confidence in overcoming their fear.

If ever a time may come to get yourself out of danger, even if you're new at learning it, you can get yourself out of it. Karate is also a sport and is included as an Olympic sport in 2021. Here are a few wise Karate quotes to motivate you to take it up.

If you like what you read, check out [Yogi quotes] and keep calm quotes.

Here we have the best Karate quotes from Karate masters like Mas Oyama, founder of Kyokushin Karate, Hironori Otsuka, founder of Wadō-ryū style of karate or Gichin Funakoshi quotes, the founder of Shotokan karate-do.

1. "If you don’t overcome your tendency to give up easily, your life will lead to nothing."

2. "It is important to alter the form of the trained kata without hesitation to produce countless other forms of training."

3. "Karate is a defensive art from beginning to end."

4. "Karate ultimately produces in the individual a vital concentration of energy that expands to heroic proportions in times of crisis."

6. "Train with both heart and soul without worrying about theory."

7. "If you observed 100 matches, you would see that probably nine out of 10 are won by the person in better shape."

8. "The Way to find courage is to seek it on the field of conflict. And the sure way to victory is willingness to risk one’s own life."

9. "The ultimate aim of karate lies not in victory nor defeat, but in the perfection of the character of its participants."

11. "Kata are not some kind of beautiful competitive dance, but a grand martial art of self-defense - which determines life and death."

12. "Karate is not about techniques and their execution, but about boldness, integrity and fight for justice and common good."

13. "The purpose of Karate is to guide you out of trouble by any means necessary, both in actual combat and in life."

14. "Once a kata has been learned, it must be practiced repeatedly until it can be applied in an emergency, for knowledge of just the sequence of a form in Karate is useless."

16. "The more understanding you have about Karate, the less you need to change or modify it."

17. "To all those whose progress remains hampered by ego-related distractions, let humility – the spiritual cornerstone upon which Karate rests – serve to remind one to place virtue before vice, values before vanity and principles before personalities."

18. "Karate-do may be referred to as the conflict within yourself, or a life-long marathon which can be won only through self-discipline, hard training, and your own creative efforts."

19. "Karate-do is definitely a martial way, and its identity lies in do or principles. Any martial art without proper training of the mind turns into beastly behavior."

20. "Karate has no philosophy. Some people think that … Karate has a connection with the absolute, space and universe. My philosophy is to knock my opponent out, due to the use of only one technique. One finishing blow!"

21. "True Martial Arts is universal, simple and practical. Anything else is too complex to be used in combat."

22. "Karate aims to build character, improve human behavior, and cultivate modesty; it does not, however, guarantee it."

23. "You are what your teacher is, and if he knows a lot, you should be able to demonstrate this knowledge."

24. "Karate is like boiling water, if you do not heat it constantly, it will cool."

25. "Never depart from the way of martial arts."

Quotes From Movies About Karate

26. "I haven’t always made an honest living, I admit that. But take a good, hard look at yourselves. You are not so different. You lie, you cheat, you exploit. Are you willing to admit that? I didn’t think so."

27. "Self-confidence is the most important thing, no matter where you are."

28. "The world isn't fair but moral standards apply to us all [...] The world doesn't belong to the rich, or even the powerful, but to those of pure heart."

Wong Shun Leung: No need to tell me all this. Let's just fight. I'll pay you the school fees if I lose.

31. "I thought I could put martial arts behind me. But deep down, I know I never could. Those of us who fight never understood the true meaning of martial arts."

32. "In the face of injustice, I must stand up and fight. That was why we took up martial arts. This is something I very much want to do. Just as you want to cheer leading."

33. "Why'd God make women pretty but dumb? They're pretty, so men will like them. They're dumb, so they will like men."

Ip man: The best thing is not to fight at all."

35. "Captain Lei Chiu: Why am I a traitor? Their deaths have got nothing to do with me. I'm just an interpreter. I need to scrape a living too!

Ip Man: Scrape a living? You watch your countrymen get beaten to death. Where's your dignity?"

Here at Kidadl, we have carefully created lots of interesting family-friendly quotes for everyone to enjoy! If you liked our suggestions for Karate quotes then why not take a look at 'Karate Kid' quotes, or You Got This! quotes.