100 Katana Names From Mythology, Fiction, And History, Plus Ideas For More 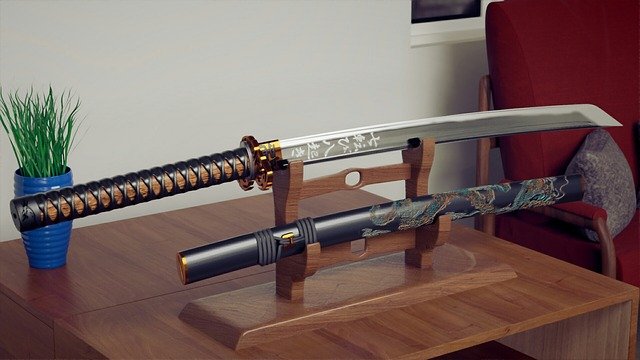 Katanas are just one of the many Japanese kinds of swords.

There are different types of Japanese swords and they carry based on their size, shape, use, and method of production. Some of the common and main ones are the odachi, katana, wakizashi (this sword forms a partner set with the katana), tachi and the tsurugi.

The katana is known by a few other names and there is no singular or plural form of the word. Katana means "knife" and these legendary swords played an important role in Japanese history. It is a weapon that was used by Samurai in the feudal era, characterised by its the length and shape. The katana is a single curved edged sword with a sharp tip, and can also be identified by its square guard and long grip. The blade length, also known as the nagasa, is approximately 24 inches or 60cm (two shaku).

The katana belongs to a family of long bladed Japanese weapons, yet the katana sword is different from other swords even though they are all long blades. Hre you will learn about the famous Japanese swords that have had fascinated many for years. If you want to dig deeper, there more articles for you that are related to Samurai swords and Japanese culture such as this list of the most famous Samurai names and what they did and this list of the Samurai sword names and types. But for now, let us find out some epic katana names!

Japanese mythology and folklore from ancient Japan are filled with stories of Samurai warriors going to battle and slaying their enemies with their deadly weapon. A Samurai sword was made to be unique to him, so he could decide whether to make it a double-edged sword. This list has some legendary katana names that have been involved in some really exciting tales. These are the infamous katana names that hold a place in history and the mythology. In this list you can learn about some famous Japanese sword names and possibly even their owners as well.

1. Almace, also known as the Sword of Tupic.

2. Ama-no-Habakiri, this is the Sword of Shinto God.

3. Balisarda, referred to as the Sword of Rogero.

4. Blutgang, a mythical sword from the Heime in Anglo-Saxon poems.

5. Caladgolg, this is the sword of Fergus Mac.

7. Cheng Ying, a mythical sword from the Zhou Dynasty in China.

8. Chandrahs, the Sword of Ravana.

9. Chandrahrasa, also known as the Sword of Bodhisattva.

11. Chun Jun, the sword believed to be forged by Ou Yezi.

12. Chrysaor, the golden sword that belonged to Sir Artegal.

13. Excalibur, a famous sword which is said to have magical powers.

14. Futsunomitama-no-Tsurugi, the sword of Shinto the thunder God.

15. Galatine, referred to as the sword of the Lady from the lake.

16. Gan Jiang/Mo Ye, is the most respected sword in China.

17. Girish, the sword of the Hindu God Shiva.

19. Izanagi Asi, this is the sword of Brahma used to defeat evil forces.

20. Shinto God Ohabari, this is the sword name of a Shinto God.

Due to the popularity of Japanese swords, storylines of films, TV series, and animes, are often based around ro feature these swords. These are therefore some famous katana names that have appeared either on the big screen or in books. Such is the fame of these Japanese katana names that some people who actually acquire real katanas and need names for them are tempted to use some of these as inspiration for their real new sword names. If you want to be a real-life Japanese Samurai, complete with a toy (of course, it is important to remember that a katana is a real weapon along with other swords, and can be dangerous) katana, then your toy sword will need a name. You can select from any of these legendary katana names that will surely suit your new toy Samurai sword.

21. Aimi, means "beautiful love" given to a beautiful sword.

23. Benihime, meaning the “crimson princess” is the weapon used by Kisike Uruahara in the anime 'Bleach'.

24. Faridah, means "unique" as it is given to a truly unique katana.

25. Gabriel, a sword name inspired by the archangel Gabriel.

26. Katen Kyokotsu, means “bones of heavenly blooming madness," a unique zanpakuto which is a paired weapon used in 'Bleach'.

27. Kazeshini, means “wind of death” and is truly an iconic tool that transforms into a tool of death, used by Shuhei Hisagi in 'Bleach'.

28. Kubikiri Orochi, means “beheading serpent”, it is used by the character Hiyori. The name is derived from a mythical dragon found in various Japanese myths.

29. Kusanagi-no-Tsurugi, meaning “grass cutter”, this Samurai sword has a very unique story to it. It is said to have been used by a warrior fighting with a corrupt Samurai. The sword helped him to escape encroaching flames in an open field as he directed the sword against the flames when it was swung

30. Kyoka Suigetsu, means “mirror flower, water moon,” a mythical sword that had the abilities of deception, hypnosis and illusion. From the anime 'Bleach'.

32. Mugenjin, meaning “hailing from the abyss” and was used in the manga and anime series 'Rurouni Kenshin' by Shishio.

34. Nozarashi, means “weather beaten one” and it belongs to the character Kenpachi Zaraki in 'Bleach'. In the anime, this sword is in need of some maintenance.

37. Suzaku this is a sword that appears in various franchises of the 'Showdown' fighting game. It is depicted as a bird on fire in the game.

38. Shichishito, meaning“seven branched sword”, this is a sword that is used during ceremonial rituals, it branches off into six alternating prongs. It is a unique katana name.

39. Shinken Hakkyoken, means “eight mirror sword”, this sword is used by a character Nanao Ise, by the virtue of her family lineage.

40. Shisui, meaning “water stopper”, the name comes from the legendary sword's ability to cut through a waterfall. It was used in the movie 'Motoko Aoyama'.

41. Tenken, means “heavenly punishment”, this is an impressive katana that is used by the character Sajin Komamura in 'Bleach'.

42. Wabisuke, means “the wretched one,” it is used by the character Izuru Kira. This sword can also transform into a rigid 90 degree hook weapon just by the phrase "raise your head".

44. Zangetsu, means “slaying moon” and is used by the very popular protagonist Ichigo Kurosaki in 'Bleach'.

45. Zantetsuken, meaning “iron cutting blade” and is a weapon used by gaming characters to remove things from their path. The sword appears in some 'Final Fantasy' games.

If you are a creative and you need names for your katana toy or are looking for names for your own fictional character's katanas, then this is the list you need to be looking at. These are cool Japanese sword names, most of them derived from Japanese words. Each Japanese sword featured in your creative work should be given a unique and special name. A katana is not just a weapon, it is also a work of art and will be used a lot in ceremonial rituals and celebration, so getting its name right is important! These names might represent what your character stands for and will certainly add more depth and definition to your story. Why not get inspired by the great array Japanese sword names, name of legendary swords and other names for a katana below?

55. Endure, means to persevere and to hold on.

70. Light of Life, an ironic name choice for a sword that could symbolize freedom and bringing liberation.

74. Nazak, the meaning isn't quite clear.

78. Rehai, the meaning of this name is not clear.

80. Ryuusei no Ikari, meaning "wrath of the meteor".

82. Sen no Taiyou no Tsurugi, meaning "sword of a thousand suns".

89. Sraque, the meaning is unknown.

96. Untamed Death, for a sword that is untamable.

97. Usumidori, this katana was used by the legendary General of Japan, Minamoto no Yoshitsune.

100. Zulfiquar, the name of the sword given by the Prophet Muhammad as a gift to Caliph Ali ibn Abi Talib.

Kidadl has lots of great names articles to inspire you. If you liked our suggestions for katana sword names and want to find more names from Japan for characters (or even for pets!), then why not take a look at something different like these nifty ninja names with meanings or these Japanese dog names?