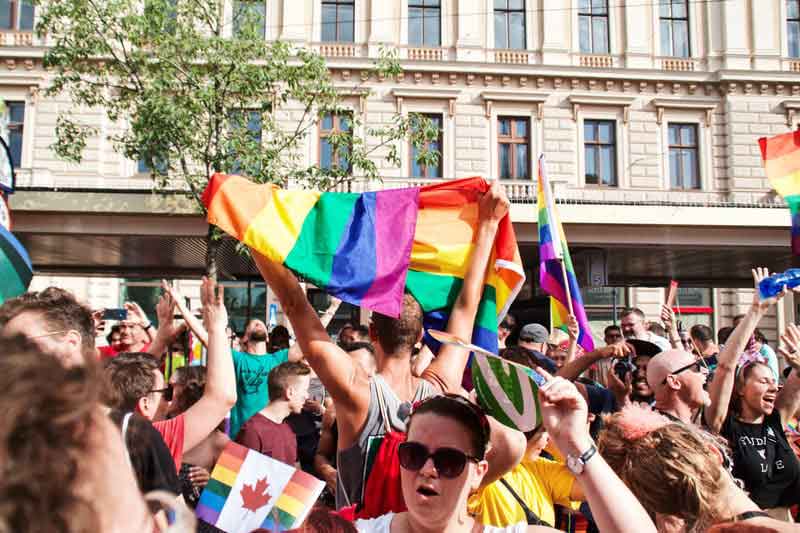 The LGBT Community fights for a civil rights and social cause.

A cause to recognize people with different gender orientations than straight people. Since the world is accustomed to only two genders, acceptance of the third gender in society has become challenging.

The LGBT Community or LGBTQ as popularly known is a community of Lesbians, Gays, Bisexuals, and Transgenders, who share a common culture and represent themselves at social movements. The LGBT Community has been fighting for a cause towards acceptance and recognition of their community. The Stonewall Uprising that took place in June 1968 is considered a significant social movement that fought for LGBT rights.

In today's world, diversity, inclusion, and acceptance are openly talked about. While equal rights for women are still strengthening their ground in some parts of the world, the LGBT community has risen to showcase their importance of inclusion across society.

Here we bring you a collection of the best LGBT support quotes that will inspire you to fight for the LGBT right to equality. We also bring you these LGBT positive quotes and information around the LGBTQ Community to help people open up to accept and celebrate life. These best inclusion quotes about LGBT acceptance shall encourage many people to come out of their caves and live life like every other human being. If you are looking for more activists quotes or quotes about acceptance, you may want to check out the latest work on Human Rights quotes and Activism quotes.

Gender preferences shall not snatch anyone's right to live. These famous LGBT quotes will inspire you to support one another and fight for the recognition of the community.

1."There will not be a magic day when we wake up and it’s now okay to express ourselves publicly. We make that day by doing things publicly until it’s simply the way things are."

2."Silence kills the soul. It diminishes its possibilities to rise and fly and explore. Silence withers what makes you human. The soul shrinks, until it’s nothing."

The LGBT Community has been under the constant pressure of acceptance and discrimination in society. These quotes about LGBT discrimination help you understand their fight for equality and justice.

4.“Workplace equality is improving, but some employees, unfortunately, still face discrimination because of their sexual orientation and gender identity"

5."Openness may not completely disarm prejudice, but it's a good place to start."

6."We need, in every community, a group of angelic troublemakers. When an individual is protesting society's refusal to acknowledge his dignity as a human being, his very act of protest confers dignity on him."

Many people and celebrities across the world have come in to support the cause of the LGBT Community. Here we bring a collection of pride quotes that the LGBT community can use to celebrate the Pride Month of June.

7. "We are ordinary people, living our lives, and trying as civil rights activist Dorothy Cotton said, to fix 'what ain't right' in our society."

8."I think being gay is a blessing, and it's something I am thankful for every single day."

9.“The next time someone asks you why LGBT Pride marches exist or why Gay Pride Month is June tell them ‘A bisexual woman named Brenda Howard thought it should be.’”

10."Every gay and lesbian person who has been lucky enough to survive the turmoil of growing up is a survivor. Survivors always have an obligation to those who will face the same challenges."

Marsha P Johnson was an American activist who fought for gay rights and gay liberation. She was a self-proclaimed drag queen who played a vital role during the Stonewall Uprising. Here we bring a few inspiring Marsha P Johnson quotes.

12."As long as gay people don't have their rights all across America, there's no reason for celebration."

13."A lot of times I've reached my hand out to people in the gay community that just didn't have nobody to help them when they were down and out."

15."History isn't something you look back at and say it was inevitable, it happens because people make decisions that are sometimes very impulsive and of the moment, but those moments are cumulative realities."

The right to choose is as important as the right to live. However, the acceptance of the LGBT community is varied across the world. While Australia protects the community with equal laws and responsibilities, other countries are yet to come to terms with accepting the community. Here are a few quotes that talk about LGBT Rights.

16.“I am not here to entertain straight people.”

17."When I see young men and old women come out of the closet and face being called gays and dykes and pariahs and betrayers of the family dream, then I am honored to be gay because I belong to a people who are proud."

18.“If a bullet should enter my brain, let that bullet destroy every closet door.”

19."We should indeed keep calm in the face of difference, and live our lives in a state of inclusion and wonder at the diversity of humanity."

20."Straight people, he thinks, probably don't spend this much time convincing themselves that they're straight.”

21."I've been embraced by a new community. That's what happens when you're finally honest about who you are; you find others like you."

Freedom comes when people are accepted for who they are and whom they choose to be with. Find below a few love quotes for LGBT activists and supporters.

22.“Love him and let him love you. Do you think anything else under heaven really matters?”

23."The only queer people are those who don't love anybody."

25.“I'm blown away by how happy you make me. Thank you for being there for me when I'm stupid enough to think I'd rather be alone.”

― Adam Silvera, 'History Is All You Left Me.'

Belonging to a third gender has attracted the attention of many. While activists focus on fighting for gay rights, self-proclaimed gays sometimes don't stop making Pride month funny and enjoyable for their community. Well, here are a few cute LGBT quotes for you to enjoy Pride month.

26."My brother is gay and my parents don't care, as long as he marries a doctor."

27."My cousin's gay, I always tell him that in our family tree, he's in the fruit section."

28."I say no to gay marriage. It'll end up leading to gay divorce, and that'll be benchy."

29."They say you can't tell guys are gay just by looking. But if two guys are kissing, you can figure at least one of them is gay."

30.“If Michelangelo had been straight, the Sistine Chapel would have been wallpapered.”

31."A dreamcatcher works, if your dream is to be gay."

Here at Kidadl, we have carefully created lots of interesting family-friendly quotes for everyone to enjoy! If you liked our suggestions for LGBT Quotes then why not take a look at Women's Rights quotes, or Animal Rights quotes.

What To Do When You Find Out You're Pregnant: 11 Top Tips For A Smooth First Trimester
Emily Munden
No items found.