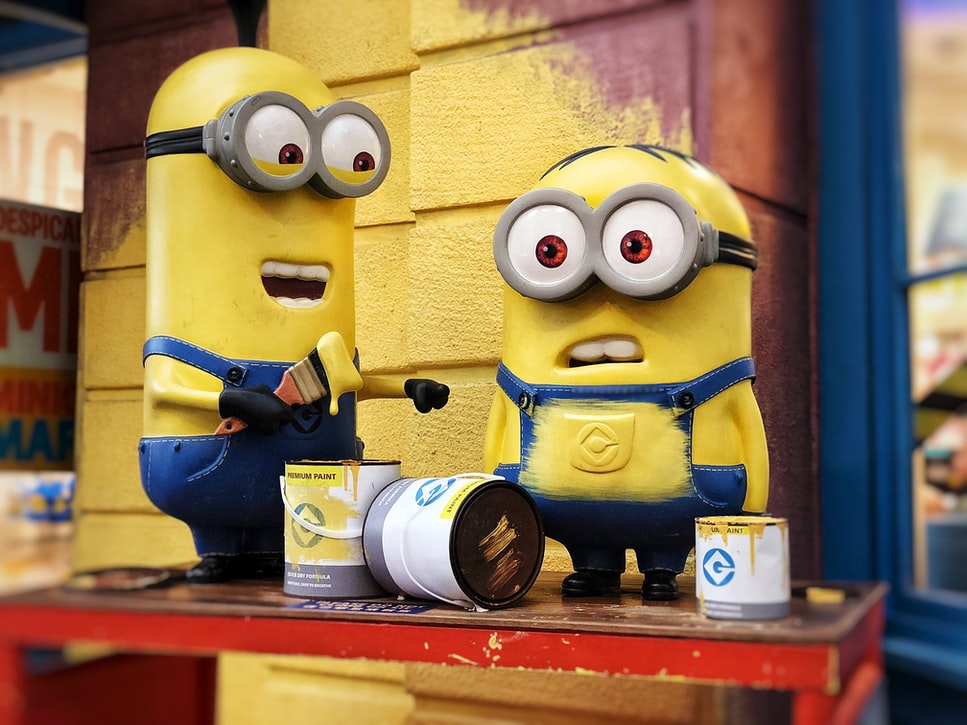 Minions are tiny, yellow creatures, or henchmen, in a cylindrical shape with one or two eyes.

Minions were introduced through the film 'Despicable Me' (2010). The story centers around the character of a super-villain Gru and his tiny creatures called minions.

There has been a franchise of films after the immense success of the first one. 'Despicable Me 2' (2013) and 'Despicable Me 3' (2017) followed the series and there was also another successful spin-off prequel called 'Minions' (2015). In 2021 'Minions: The Rise Of Gru' will be released as a sequel of the 'Minions'. There have been several short films made on the characters of minions like 'Home Makeover' (2010), 'Orientation Day' (2010), 'Banana' (2010) and several others. There was also a special television programme called 'Minion Holiday Special' (2020) which broadcasted a compilation of short films and songs. Minion songs are extremely popular among kids, the lyrics are gibberish and the music is catchy so the kids can sing along without the need to understand any meaning. The plot and the characters are hilarious and they make both kids and adults happy. Minion quotes and sayings are hilarious too, not always can you understand the meaning but can enjoy your time reading them. There are minion inspirational quotes, cute minion quotes, 'Despicable Me' minion quotes, minion quotes about life, minion quotes about friendship, minion best friend quotes and other hilarious and sarcastic minion quotes.

If you like this article on minion quotes, you might also check out  'Trolls' quotes and ['Shrek' quotes].

Minion quotes are as hilarious as their actions, they will make you want to go back to childhood. Funny memories are created as you watch the tiny creatures make your day. Here are a list of 'Despicable Me' minion quotes, minion motivational quotes and minion quotes from the movie 'Minions', if you want to have a great time recalling these hilarious quotes.

9. "Minions have been on this planet far longer than we have."

Hilarious Quotes From Other Characters in Minion Movies

16. "Oh. It’s you. Everyone, this is one of the little fellows who stole the monarchy from me. And how’s that working out for you?"

17. "Hello, Fred. FYI, your dog has been leaving little bombs all over my yard, and I don't appreciate it."

18. "And once the moon is mine, the world will give me whatever I want to get it back! And I will be the greatest villain of all time! That's what I'm talkin' 'bout."

19. "And please bless that someone will adopt us soon, and that the mommy and daddy will be nice and have a pet unicorn. Amen."

20. "This time, good triumphs, and the moon has been returned to its rightful place in the sky. But once again, law enforcement is baffled, leaving everyone to wonder, who is this mysterious hero? And what will he do next?"

21. "Fear not, for here come the gallant knights to save us!"

22. "This is just gonna take an momento. I am throwing a big Cinco de Mayo party, and I'm gonna need 200 of your best cupcakes, decorated with the Mexican flag. "

24. "I promise that this wig will transform you from ugly to irresistible."

Minions have a song for every occasion and most of their songs are hilarious and melodious too. Christmas is the best time of the year and the minion song about Christmas makes it even better. To see kids enjoy the funny minion songs and speak funny minion quotes, just makes the day amazing. Here is a list of minion Christmas quotes, best minions quotes that are funny and hilarious. As the minions have their own special language, that is how their quotes appear here!

We are the Million Minion March."

42. "We can take whatever you need

We got skill, precision, and speed."

Besides that, who would steal the moon."

Here at Kidadl, we have carefully created lots of interesting family-friendly quotes for everyone to enjoy! If you liked our suggestions for minion quotes, then why not take a look at ['Megamind' quotes], or ['Meet The Robinsons' quotes]?