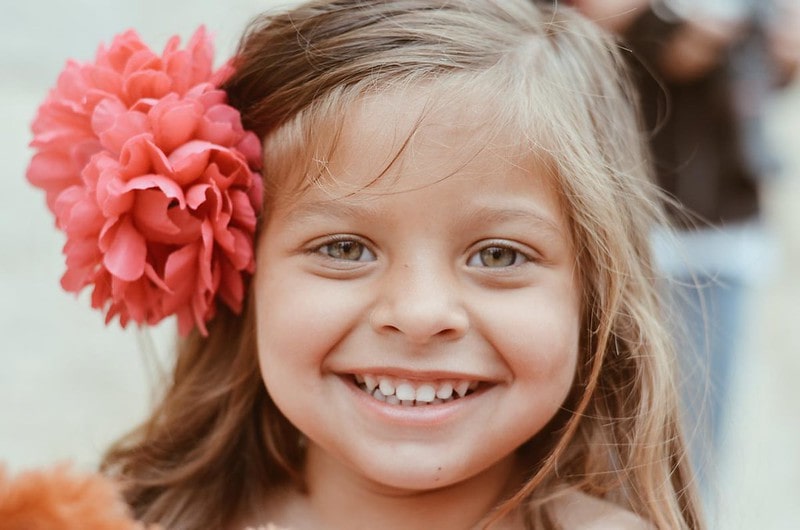 Over the ages, our ancestors were fascinated by the beauty of roses, and they came to associate such a charming flower to love and passion.

The symbolism still lives on to our day, and it’s impressive how many languages still have timeless names that directly translate to rose or play on the word. We’ve compiled a list of around 100 different names that mean rose, with their meanings, so there's no shortage of names to choose from for your precious flower.

For more baby names, take a look at these Earthy Boys Names and Names That Mean Sun.

On our quest to search baby names that mean rose, we didn’t expect to find this much variety in the English language alone; while some are of Latin origin, they found their way into the English culture.

2.Ros (English origin), among the names that mean “rose.”

3.Rosa (English origin), means “little rose.” The name has a biblical significance, as back in the 19th century, a rose was strongly associated with the Virgin Mary.

4.Rosabel (Latin origin), short for Rosabelle, and it means “beautiful rose” that charms people by its one of a kind beauty. A common nickname for Rosabel is Rose.

5.Rosanna (English origin), a mashup between rose and the name Anna. The name also has a strong Christian significance.

6.Rose (Latin origin), derived from the Latin word rosa, and it’s one of the most popular flowers of all time.

12.Rosita (English origin), meaning the “queen of roses.” Honor, fame, and kindness are some of the associations with the name.

13.Rouzia (English origin), another addition to our English names. This name celebrates the adventurous spirit and risk-taking nature.

14.Roz (English origin), another variety of the name, and it means “pretty rose.” The name also refers to an acclaimed protector.

15.Rozy (English origin), refers to someone as beautiful as a rose. It was also believed to bring good luck and wealth to its bearer.

Popular Names Inspired By Roses In Other Languages

Different languages are rich in various names that mean a beautiful rose; in this segment, we chose some of our top picks from different cultures with rose as a name or inspiration for you to choose from.

17.Chloris (Greek origin), a name after the Greek Goddess of Roses.

22.Gulbadan (Urdu origin), meaning a lady with a body as beautiful as a rose.

24.Kaly (Greek origin), meaning "rosebud" and refers to a beloved or beautiful woman.

25.Kalyna (Ukrainian origin), refers to a particular species of roses, known as Guelder.

26.Kulap (Persian origin), among the girl names that mean “rose” in the Thai language.

28.Mariene (French origin), the French variation of Marie or Virgin Mary, which explains how the biblical significance ties it to roses.

29.Maryam (Hebrew origin), one of those names that have multiple origins and meanings. It’s derived from the Arabic and Hebrew cultures and conveys the meanings of a “sea of sorrow” or “beloved child.” It gets its relevance to roses thanks to its biblical heritage, with the name belonging to the sister of Aaron and Moses.

30.Mawar (Indonesian origin), translates to “rose” in Indonesian and Malay.

31.Melrose (Scottish origin), a mix between the Greek name Melanie and the word rose.

33.Nazgul (Kazakh origin), meaning “flower” or among the names that mean “rose.”

40.Raysel (Yiddish origin), another variant of the name rose.

47.Rosel (Swedish origin), among the names that mean “rose.”

49.Roza (Russian origin), translates into “rose” in a number of the Slavic languages.

50.Rozenn (Breton origin), refers to a variant of roses with spikes.

52.Sarnai (Mongolian origin), among the other Mongolian names that mean “rose.”

54.Susanne (Greek origin), yet another biblical name that refers to a number of flowers, including roses and lilies.

56.Vardo (Georgian origin), among the names that mean “rose,” and it’s impressive how the name started to pick popularity in other countries.

You might think that names inspired by roses won’t be the most fitting for your baby boy; however, this is far from true as many of the well-known male names have something to do with roses.

62.Basilio (French origin), refers to a royal bloodline of kings and queens. The name gets its link to roses, as many royal families back in the day assigned roses as their symbol.

63.Cole (English origin), a name after the Middle Ages references to the prince of red roses.

65.Roslyn (German origin), the shortened version of the old German name Rosalind. It’s now being used as a unisex baby name. The name is a mashup between german words for a horse and a snake.

67.Roswald (German origin), another German horse name that happens to also refer to a field of roses.

68.Roswell (German origin), refers to the blossoming roses in springtime.

As a matter of fact, roses are not the only type of flowers to have inspired the origin of many of the names we love today; there are plenty of other pretty flower names, and we decided to mix things a little bit here and mention a few of the most popular ones.

71.Acacia (Greek origin), meaning “thorny tree” and the name of the strong acacia trees and shrubs.

72.Alyssa (Greek origin), referring to the alyssum flower, believed to cure madness. We do believe kids have healing powers, even on the most hectic of days!

73.Amaryllis (Greek origin), referring to the amaryllis that blooms with vitality and beauty.

75.Camellia (Latin origin), after the camellia flowers and meaning "helper to a priest."

83.Lavender (Old French origin), meaning "to wash," and refers to the lavender plant.

84.Lily (Greek origin), among the cute names for girls; referring to the lovely lilies, and meaning "pure," "passion," and "rebirth."

85.Lotus (Greek origin), the lotus flower, a symbol of purity in Buddhism and of rebirth to ancient Egyptians.

88.Orchid (Greek origin), referring to the orchids, associated with beauty, love, and sophistication.

89.Peony (Greek origin), referring to peonies and associated with healing.

92.Violet (Latin origin), derived from "viola" and refers to the purple flower.

93.Zinnia (German, Latin origin), referring to a beautiful plant of the sunflower tribe.

Since girls flower names tend to have this timeless appeal, many authors and composers chose to use such names for their female characters; if you're a literature or music enthusiast, consider one of these!

96.Hazel (Old English origin), refers to a flowering plant called witch hazel. It was chosen by John Green in The Fault in Our Stars for the character Hazel Grace.

98.Nydia (Rare English), derived from "flower nest" and was given to a blind flower-seller in Edward Bulwer-Lytton's novel The Last Days of Pompeii.

99.Primrose (English origin), among the English names for girls meaning "first rose" and used by Bram Stoker in his first novel, The Primrose Path.

Kidadl has lots of great baby names articles to inspire you. If you liked our suggestions for Names Meaning Rose then why not take a look at Girls Tree Names, or for something different take a look at Thai Girls Names.