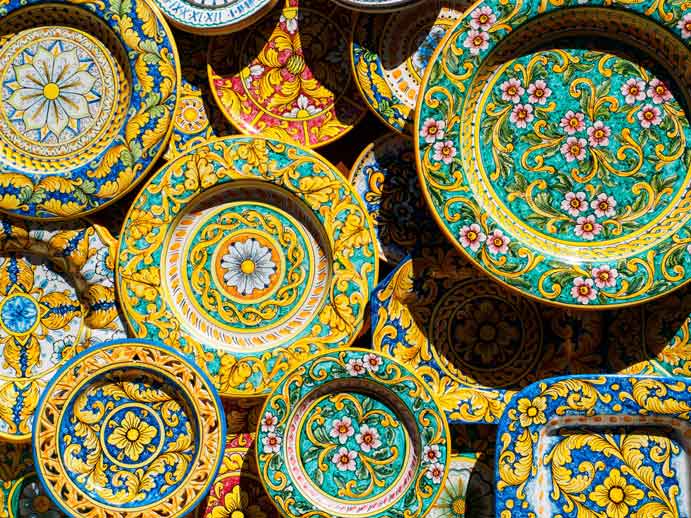 Do you think that prints or patterns will ever go out of fashion? Well, we don't think so!

Just kidding, this can only happen when a designer or clothing companies run out of patterns for fabric, but from what we can gather that ain't gonna happen anytime soon.

To help you understand different types of patterns, let's start with the basic and most commonly used patterns around the world like basketweave, brocade, checkered, chevron, and others.

A pattern is called a repetitive design or theme. They are nearly as old as mankind and may appear randomly all over the cloth or at a predictive interval distributed throughout the design. To help you better understand these patterns, we have presented a detailed guide.

1. Counterchange pattern: These patterns may use two colors to form a color symmetrical fabric pattern. This reverse in color design usually has two colors, black and white.

3. Illusion Patterns: Such motifs are used to gives an optical illusion to the viewer. These patterns give depth and uniqueness to the clothes.

4. Shepherd's checks patterns: The simplest of the check patterns. Small, even-sized checks are made out of two colors, which resemble a checkerboard, hence it is called 'sponge bag' or checkered patterns.

5. Stripes: If you are looking for a pattern with a beautiful dimension, the stripes are for you. These are bands/lines that are placed either horizontal, diagonal, or vertical stripes along with the fabric.

6. Trellis Patterns: A pattern that resembles climbing vines. In this pattern, it appears that pieces of wood or metal are interwoven.

7. Vermicular Patterns: A pattern of irregular lines that looks like worms crawling in different directions. It has become one of the most popular design patterns after Kendell Jenner wore a dress resembling crawling snakes.

8. Zebra print: As the name suggests, this pattern is inspired by the black and white animal himself.

9. Airbrush Patterns: This soft and blurry pattern is made using a spray gun.

10. Anthemion pattern: This is the most common pattern in Greek and Egyptian ancient art. Made from two colors from the same family. The anthemion pattern is a classical pattern, which uses fan-shaped palm leaves as motifs, which appear at an even distance.

11. Basketweave Patterns: A simple pattern that resembles a woven basket.

12. Bird's Eye Pattern: This pattern is weaved around 4 small diamond shapes with a dot or space in the center to make it look like the eye of a bird.

13. Brick Network Patterns: One color line are used in an alternate pattern to create an impression of laying brick.

14. Bull's Eye Pattern: This pattern consists of concentric or coaxial circles to give an illusion of depth. It is a form of geometric shapes in fabric patterns.

16. Cartouche pattern: This pattern resembles a frame, table, or scroll, which has an inscription written all over it.

18. Coin Dot Patterns: Just like polka dots, but with here the dots are very big. These are the most common form of fabric pattern used by designers.

19. Dotted Swiss Patterns: it is characterized by raised small dots on thin fabric.

20. Diagonal Patterns: This fabric print consists of shapes, lines, or stripes organized diagonally on the fabric.

21. Ditzy Pattern: Also known as ditsy. These are scattered or random patterns of rows and stripes.

22. Geometric Patterns: These repetitive fabric patterns consist of geometric shapes throughout the fabric.

23. Hexagonal Patterns: This fabric design is made from hexagonal shapes throughout the fabric.

24. Harlequin Patterns: A fabric design made from a repeating pattern of elongated squares or diamonds.

25. Lattice Patterns: These patterns use interconnected squares, holes, or diamond-shapes in a crisscross pattern.

26. Network Patterns: It is characterized by repeating combinations of motifs like squares, rectangles, or ogee shapes.

27. Pin Dot Patterns: This very small dots made by a pinhead resembles polka dot pattern but is very finely designed.

28. Polka Dot Patterns: This is characterized by a pattern of equally spaced dots throughout the surface of the fabric.

29. Quatrefoil Patterns: in this pattern, 4 circles overlap each other.

30. Watercolor Patterns: This pattern resembles a watercolor painting with light and dark brush strokes along with a strong gradation effect.

31. Oriental Patterns: This pattern uses intricate motifs from India and most Arab countries to create a medallion shaped design throughout the fabric. It uses vibrant colors for the designs.

32. Paisley Patterns: Paisley uses an oriental teardrop motif with vibrant colors all over the fabric. Paisley Patterns is an ornamental textile design which is often used for sarees, dresses, and others. Did you know: Paisley is also a town in Scotland, even though the pattern originally comes from India?

34. Adaptation pattern: It is a kind of pattern that is based on a design from another pattern but the designs are modified significantly. thus creating a new pattern altogether.

35. African Patterns: Made from tribal and natural motifs from Africa called Ankara with vibrant patterns and vivid colors.

36. Allover Pattern: This type of pattern is designing motifs, which appear too close to each other but are distributed evenly. Most fabric patterns are based on allover patterns.

37. Animal Patterns: As the name suggests, these patterns use animal skin patterns for creating designs.

38. Arabesque Pattern: This Islamic art pattern is called arabesque, which is a floral. It is sometimes often a part of the or geometric pattern designs.

39. Art Deco pattern: This was the most common fashion and fabric pattern used in the 1920s through the 1930s. The Art deco patterns use geometric shapes, lines or stripes, and decorations to create an intricate yet simple design.

41. Asymmetrical pattern: As the name suggests, this type of pattern uses asymmetrical designs to form symmetry.

42. Batik Patterns: A famous resist-dyeing pattern that uses natural designs and motifs for geometrical pattern designs. A most famous form of the pattern used in Indian clothes.

43. Bead And Reel pattern: An oval and round shapes design, which appear alternative on the fabric along with elongated cylindrical shapes is called bead and reel pattern.

44. Bohemian Pattern: also known as Boho prints or Hippie patterns, was associated with the hippie movement of the 1960s. Such pattern uses bright colors and complex patterns to create patterns.

45. Boteh Pattern: This teardrop-shape with a curved upper end is a form of Paisley patterns. The boteh pattern uses this shape with other elements to create new designs on fabric.

46. Calico Pattern The calico pattern is often considered a floral design. This pattern uses bright colors and an allover display of floral images to create the design.

49. Collage Pattern: This pattern may appear like a scrapbook with photos, drawings, or other images glued together to form memories on the fabric.

50. Composite Overlay Pattern: As the name suggests, this composite overlay pattern incorporates two or more patterns to create the design.

51. Figurative Pattern: This pattern may consist of human or animal figures and sometimes historic figures to create a pattern.

52. Fleur De Lis Pattern: Lily flower pattern, which is somewhat like a floral design. The Fleur de Lis pattern is a stylized three-or four-petal, which are displayed across the fabric is often a symbol of purity.

53. Floral Patterns: This flowery pattern in design uses floral motifs all over the fabric.

54. Hawaiian Patterns: As they suggest, these fabric patterns use cultural motifs from Hawaii for print designs. If you are looking for cute pattern designs, then this is the one for you.

55. Herati Pattern: This pattern comes from a city in Afghanistan called Herat. This Herati pattern uses a rosette enclosed in a diamond with a serrated leaf along the side.

56. Jacobean Patterns: A pattern based on Jacobean embroidery patterns like flowers, birds, etc. for print.

57. Landscape Patterns: These patterns that use landscape scenes for fabric pattern.

58. Mosaic pattern: This type of pattern uses many small colored pieces to form a square roughly. The mosaic pattern appears as distorted or warped squares or other geometrical shapes sprayed across the fabric.

Kidadl has lots of great baby name articles to inspire you. If you liked our suggestions for pattern names then why not take a look at purple names or green names, for more color related content.