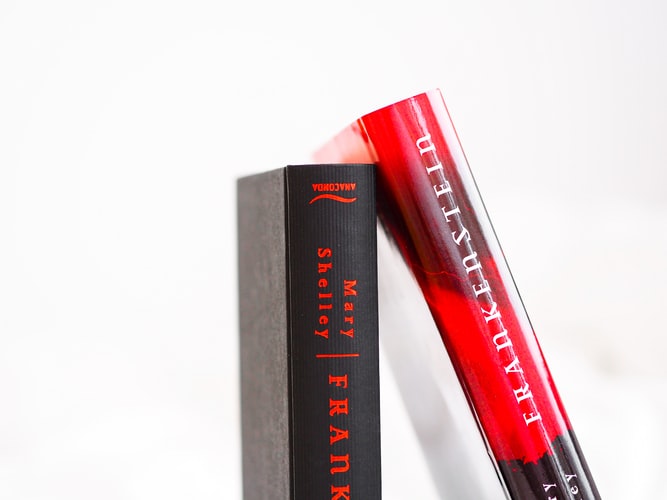 'Frankenstein' is an iconic novel written by Mary Shelley.

The book is about a young scientist, Victor, who by scientific experiment creates life. 'Frankenstein' is a metaphor for many things to many people.

Most commonly the creature is understood as a metaphor that symbolizes the blank slate that each human is born as, and the influence that our experiences have on who we become. Victor is presented as a man playing God and failing at it in the book. While Victor failed miserably at his experiment and couldn't tolerate his own creation in the end, it raises the question for readers as to whether the creature was the monster or whether Victor himself was.

1. "I leave you, and in you the last of humankind whom these eyes will ever behold. Farewell, Frankenstein!"

2. "Life and death appeared to me ideal bounds, which I should first break through, and pour a torrent of light into our dark world. A new species would bless me as its creator and source."

3. "I collected bones from charnel houses; and disturbed, with profane fingers, the tremendous secrets of the human frame."

4. "Solitude was my only consolation - deep, dark, deathlike solitude."

6. "The world was to me a secret which I desired to divine."

7. "To examine the causes of life, we must first have recourse to death."

8. "Beware; for I am fearless, and therefore powerful."

9. "The murderous mark of the fiend’s grasp was on her neck, and the breath had ceased to issue from her lips."

10. "Even broken in spirit as he is, no one can feel more deeply than he does the beauties of nature."

11. "I try in vain to be persuaded that the pole is the seat of frost and desolation; it ever presents itself to my imagination as the region of beauty and delight."

12. "Nothing contributes so much to tranquilize the mind as a steady purpose a point on which the soul may fix its intellectual eye."

14. "There is something at work in my soul, which I do not understand."

15. "Farewell, sweet lady, dearest Elizabeth, my beloved and only friend; may heaven, in its bounty, bless and preserve you; may this be the last misfortune that you will ever suffer!"

16. "Learn from my miseries, and do not seek to increase your own."

17. "So much has been done, exclaimed the soul of Frankenstein - more, far more, will I achieve; treading in the steps already marked, I will pioneer a new way, explore unknown powers, and unfold to the world the deepest mysteries of creation."

18. "Life, although it may only be an accumulation of anguish, is dear to me, and I will defend it."

19. "I once had a friend, the most noble of human creatures, and am entitled, therefore, to judge respecting friendship."

20. "Nothing is so painful to the human mind as a great and sudden change."

21. "Accursed creator! Why did you form a monster so hideous that even you turned from me in disgust? God, in pity, made man beautiful and alluring, after his own image; but my form is a filthy type of yours, more horrid even from the very resemblance."

Here are the best quotes from the incredible book by Mary Shelley.

22. "Often, when all was dry, the heavens cloudless, and I was parched by thirst, a slight cloud would bedim the sky, shed the few drops that revived me, and vanish."

24. "If for one instant I had thought what might be the hellish intention of my fiendish adversary, I would rather have banished myself forever from my native country."

25. "Nothing could be more complete than the alteration that had taken place in my feelings since the night of the appearance of the daemon."

26. "But he found that a traveller's life is one that includes much pain amidst its enjoyments."

27. "A change indeed had taken place in me; my health, which had hitherto declined, was now much restored; and my spirits, when unchecked by the memory of my unhappy promise, rose proportionably."

28. "Oh! Stars and clouds and winds, ye are all about to mock me; if ye really pity me, crush sensation and memory; let me become as nought; but if not, depart, depart, and leave me in darkness."

29. "Oh, earth! How often did I imprecate curses on the cause of my being! The mildness of my nature had fled, and all within me was turned to gall and bitterness."

30. "I turned with more attention towards the cottagers... They loved and sympathized with one another; and their joys, depending on each other, were not interrupted by the casualties that took place around them."

31. "... I learned that there was but one means to overcome the sensation of pain, and that was death."

32. "As the sun became warmer and the light of day longer, the snow vanished, and I beheld the bare trees and the black earth."

33. "Thus I relieve thee, my creator... thus I take from thee a sight which you abhor. Still thou canst listen to me and grant me thy compassion."

34. "The immense mountains and precipices that overhung me on every side, the sound of the river raging among the rocks, and the dashing of the waterfalls around spoke of a power mighty as Omnipotence."

35. "From the tortures of my own heart, I turned to contemplate the deep and voiceless grief of my Elizabeth. This also was my doing!"

36. "Get well - and return to us. You will find a happy, cheerful home and friends who love you dearly."

This novel written by Mary Shelley is an iconic one in literature. Here are some 'Frankenstein' quotes from Mary Shelley herself and other authors.

37. "I saw the hideous phantasm of a man stretched out; and then, on the working of some powerful engine, show signs of life, and stir with an uneasy, half-vital motion."

38. "My imagination, unbidden, possessed and guided me, gifting the successive images that arose in my mind with a vividness far beyond the usual bound of reverie."

39. "He never wanted to hurt anyone; he merely groped his torturous way through a second life trying to defend himself, trying to come to terms with those who sought to destroy him."

40. "I've always had a soft spot in my heart for the Frankenstein monster. No one could ever convince me that he was the bad guy."

41. "Its classical unity is broken only by the author's uncertainty as to where the fatal flaw lies - is it in Victor's hubris or in his failure to take responsibility for his creation after endowing it with the life-spark?"

At Kidadl, we have created lots of interesting family-friendly quotes for everyone to enjoy! If you liked these 'Frankenstein' quotes, then why not take a look at quotes from 'Beowulf' and quotes from 'Gone With The Wind' too?