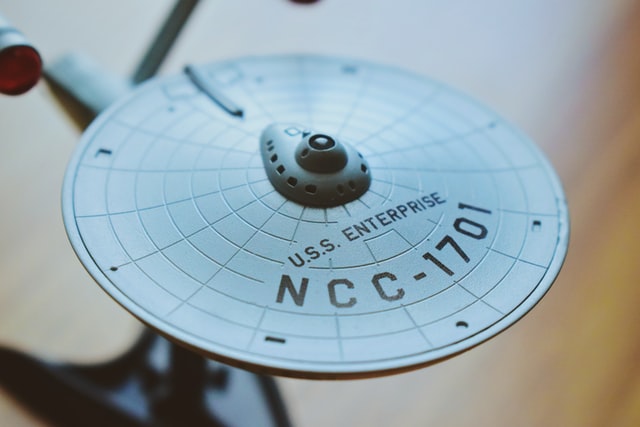 Romulan surnames typically bear prefixes like t’ for females, tr’ for males, and s’ for groups or formal association.

The Romulans originated from the planet Romulus. Did you know: they had a popular alcoholic drink that was deemed illegal due to a trade ban.

Romulans do not possess telepathic abilities like the Vulcans. Additionally, Romulans followed a more militaristic lifestyle, while Vulcans followed logic and science.

If you want some more inspiration for sci-fi names why not look at 'Star Trek' baby names, along with 'Star Wars' bounty hunters names, right here on Kidadl.

3. Commander Sela - A Romulan from the Star Trek franchise, Sela was a tactful commander. One of the famous Romulans.

5. Kabath - This Romulan doctor was responsible for removing implants from the Borg drone.

6. Karina - Karina was a diplomat in the Romulan military and worked with Ruwon.

9. Liviana Charvanek - She was a Romulan commander who had rare telepathic abilities.

10. Major Rakal - Tal Shiar operative Rakal was killed so Deanna Troi could use her identity.

11. Narissa - Colonel Narissa worked in a group that was led by Commodore Oh.

12. Nevala - Nevala was a Romulan military officer who worked under the leadership of Commander Rekar. One of the famous female Romulan names.

16. Saavik - This Vulcan-Romulan female character was a Starfleet official and Spock’s wife.

17. Selok - A Romulan spy who worked under the guise of a false Vulcan identity named T’Pel.

19. Shai - An older Romulan name who relocated to the planet of ‘Vashti’.

21. Taris - Tari was the captain of the Romulan warbird named ‘Haakona’.

22. Toreth - This female Romulan commander hated the Tal Shiar because they murdered her father.

23. Varel - She worked alongside scientist Mirok to test the cloaking technology device.

The most powerful male Romulan characters are listed below.

28. Almak - Almak was the commander of T’Met, a Romulan ship name.

29. Ayel - Ayel was a miner who worked under Nero. He was later killed by his victim, Kirk.

30. Bidran - This Romulan character was part of the Romulan Rebirth movement.

32. Centurion Tarent - Tarent was ordered to look after a Borg starship named the Artifact.

33. Chulak - Chulak served as a commander in the Romulan Star Empire.

35. Colonel Lovok - Lovok was an important agent of the Romulan Empire of Star Trek.

36. Commander Tomalak - A powerful Romulan in the Star Empire, Tomalak was the master of deception.

37. D'Tan - A young male who believed that Vulcans and Romulans would unite someday.

38. Decius - A Romulan military name who lost his rank because he went against the rules.

39. Elnor - A popular character in the Star Trek franchise, Elnor looked up to Picard and believed in humanity.

40. Frenchotte - This Romulan was a music composer who never attained fame for his work.

41. Hiren - Romulan Star Empire’s leader refused to be an ally of Shinzon.

42. Konsab - This Romulan commander taught the military officers at the Intelligence Academy.

44. Letant - This male Romulan character name had a dislike for the Klingon species.

45. Livara - A spy who posed as the captain of a Talavian cargo vessel.

46. M'ret - M’ret was a Senate member who actively spoke about the government’s unjust policies.

47. Merrok - A Romulan Proconsul, he died after being poisoned by an unknown source.

50. Nanclus - This Ambassador allegedly tried to disrupt the peace between the Klingons and the Federation.

51. Narek - This spy broke the rules by falling for the android Doctor Soji Asha.

52. Nero - A vengeful Romulan captain who caused a lot of destruction to the humans and Vulcans.

53. Nijil - A popular Romulan scientist who worked in the military.

54. Orum - The Borg kidnapped this Romulan medic and sent him to the Delta Quadrant.

55. Pardek - Unlike others, this Senator liked to promote peace between the species.

56. Patahk - This military official went on a secret mission on Pi, a Romulan ship name.

61. Simon Tarses - A Human-Romulan mix, Simon was a medical technician who served in Starfleet.

62. Sirol - A Romulan commander who was the captain of Terix, a warbird. Terix - one of the Romulan warbird names that saw many wars.

63. Suran - Commander Suran tried to aid in promoting Shinzon as a Romulan Praetor.

65. Tal - Tal was the first Romulan officer who later went after the USS Enterprise.

67. Tebok - Tebok was the captain of the first Romulan starship and was allegedly involved with the Federation.

68. Telek R’mor - Doctor Telek was a scientist and the captain of the Talvath.

69. Tenqem Adrev - A Senator who later became a part of the Romulan Rebirth movement.

70. Tokath - A Romulan Commander who married a Klingon named Gi’ral.

71. Ustard - This sub-commander was a Romulan officer who was killed in an accident.

72. Velal - The Romulan General was part of the Dominion War.

74. Vreenak - A politician who negotiated the treaty of nonaggression between the Romulan and the Dominion.

75. Xerius - He was a Councilor and spokesperson of Elysia’s ruling council.

76. Zhaban - A Romulan housekeeper who was Picard’s friend and advisor.

Kidadl has more amazing baby name articles to inspire you. If you liked our suggestions for Star Trek Romulan names, then have a look at Ewok names. You can also see top futuristic names.