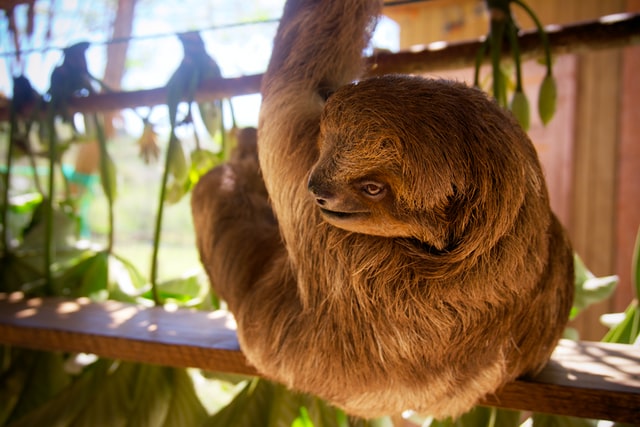 Sloths are slowest of all mammals on earth.

An endangered species, sloths make unique pets. They are lethargic in nature and dwell mostly in canopies of the tropical rain forests of Central and South America which is the sloth's habitat.

Sloths depend on tree leaves for survival. Digesting food is a slow process, taking almost 7 full days. They expend as little energy as possible. Sloths belong to the family of super order Xenarthra mammals of suborder Folivora. The common ones are three-toed sloths among two-toed and three-toed. An average sloth ranges up to 58-68cms and weighs between 9 -17 pounds (7.71 kg). Yes, this sluggish creature is one among nature’s finest wonders. Scientifically, there’s no name used to refer a sloths baby. Sloths lead a solitary lifestyle so an official collective noun doesn’t exist since it’s a rare sight. But a popular slang is “A snuggle of sloths”.

For more naming ideas, why not check out these Kidadl articles on monkey names and lizard names.

Take a look at these 10 famous sloth names from fictional stories and movies worldwide. These are cool names if you have sloths as pets.

For subtle naming ideas check out this list of 15 funny sloth name ideas. One of the fun facts about sloths, they cannot kill you but can hurt you using their large claws.

21. Bolt (English origin), meaning “fast”. It's funny because they're famously slow. Get it? Never mind...

26. Joy (Latin origin), meaning “happiness”. A fun name for all types of sloths.

One of the interesting sloth facts, aloths are not monkeys . These two mammals look alike but are neither internally nor structurally same. For cute sloths names ideas, check out below.

Kidadl has lots of great baby names articles to inspire you. If you liked our suggestions for sloth names then do take a look at goat names. For something different, check out mythical horse names.