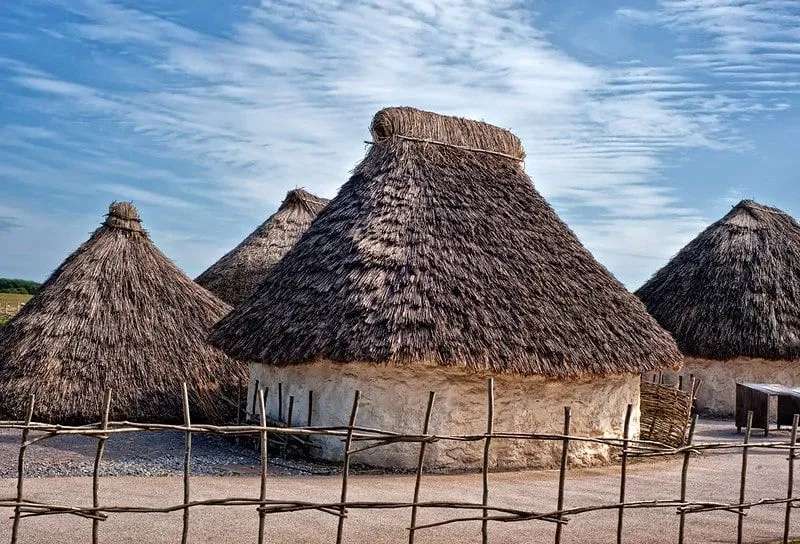 The Stone Age is an important part of the Key Stage 2 curriculum, and so kids (and parents) will need to know all about this fascinating period in history.

We have created a fact file about Stone Age houses, with everything you will need to know about the subject. Read on to learn more information about Stone Age houses and how these people lived. The Stone Age was a time before life was recorded, which historians describe as 'pre-history' or 'pre-historic', and so the only clues we have as to what life in the Stone Age looked like comes from the objects, burial sites, cave paintings and monuments that they left behind.

Did You Know? Stone Age Facts For Kids

The Stone Age started around 2.5 million years ago and is so-called because it was when humans began to make tools carved out of stone.

The Stone Age ended as soon as humans learned how to smelt metal for making tools out of bronze rather than stone, which was the birth of the Bronze Age and the Iron Age.

The Stone Age lasted for a very long time (around 2.5 million years), ending completely around 2500 BC, and it can be divided into three different periods: Paleolithic (the oldest), Mesolithic and Neolithic.

During the Paleolithic period, humans had begun to make simple shelters as well as starting to build sculptures; and by the Neolithic age, humans had formed settlements and communities, as well as growing plants and keeping domesticated animals.

The Middle Stone Age, or the Mesolithic Age, began at the end of the last Ice Age and ended when the people started farming, which brought on the new period of history - the Neolithic Age.

Villages of Stone Age homes were built around the land that had good enough resources to keep the villagers fed and alive. Rather than being hunter-gatherers who roam the land looking for animals and food, Neolithic people began growing wheat and barley or keeping cattle, sheep or goats to sustain themselves. Because they were now farming the land and producing food, they needed more permanent houses to live in.

During the Stone Age, humans moved from being hunter-gatherers to food producers, a change which happened over a very long period of history. From the beginning of the Stone Age to the end, people lived in several different types of 'house', starting with caves and ending in something that closely resembled the modern home.

1. Caves. During the Stone Age, people would live in caves to shelter from the elements and to protect themselves from wild animals. Prehistoric cave dwellings have been found around the world, many of which have beautiful cave drawings across the walls.

2. Huts and Tepees. People would often have to keep moving in order to find enough food, and so temporary shelter was useful to have. These huts would be light and portable, made of a wooden frame in the shape of a tepee, and covered with animal skin or tree bark.

3. Mammoth bones and tusks were also used to create a hut or tepee structure.

4. Near the end of this period, the neolithic people built more permanent homes, often within larger settlements. These houses were rectangular, with walls made of 'wattle and daub' and finished with a thatched roof.

What Materials Were Used in Houses During the Stone Age?

The houses built during the Neolithic years were constructed from upright posts made that had thin strips of wood woven between them. Hazelwood was most often used for the 'weaving' process, and after this wooden structure  (also called the 'wattle') was complete, the entire surface would be covered, inside and out, with 'daub'.

Daub is a mixture of chopped straw, crushed chalk and water, which makes a thick paste that would fill in the holes in the woven wattle. These houses would be topped with a thatched roof, made of straw (wheat), and they did not have any windows so the houses were lit with a small fire.

Two Neolithic huts have been faithfully reconstructed in Wiltshire, very near to Stonehenge, one of the most well-known Stone Age sites in Britain. Stonehenge is a stone circle built around 4,500 years ago, and many historians, architects and engineers still marvel at this amazing structure which was built without modern tools or sophisticated equipment.

Skara Brae: A Perfectly Preserved Settlement from Many Years Ago

Skara Brae in Scotland is a Stone Age village that has been very well preserved, making it a great place to find out details and facts about the Stone Age way of life. It is estimated that the settlement was built between 2000 and 1500 BC. All of the houses had just one room, built in a rectangular shape with rounded corners which were connected to one another by paved alleys. The doorway was low and narrow, and they would pull across a large stone slab to close the 'door'.

These homes are different from the typical Stone Age house made of wattle and daub and topped with a thatched roof because there were absolutely no trees on this Scottish island. As there were no trees everything had to be made from stone, which is why the settlement is so well preserved. Even the furniture at Skara Brae was made from stone, including 'kitchen cupboards', stools and chairs.

During the Stone Age, cattle, goats, sheep and pigs were the most common farm animals. Large patches of the forest were cleared, removing the trees so that these first farmers were able to sow seeds and grow wheat and barley.

Another invention of the Stone Age was fire. The first to 'invent' fire, the Stone Age humans used fire to keep warm, to provide a source of light within their homes and to cook food for the first time.

Using all the information above, why not draw or design your own Stone Age house?

What would daily life be like all these years ago? Why not make three drawings showing how the people, houses and animals changed from the Paleolithic age to the Mesolithic, and finally the Neolithic age. Use other resources and search for further information online to make your drawing as accurate as possible.