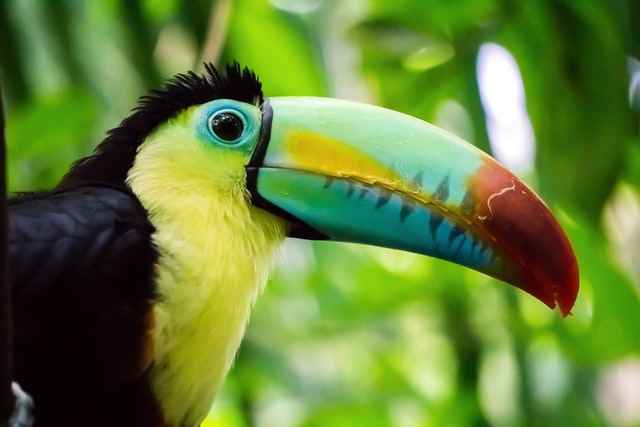 It's hard not to be wowed by the beautiful multi-colored beak of the toucan, so this list of toucan facts for kids will give you the lowdown on all about toucans.

We've got facts on the different species and different types of toucans, where toucans live in the wild, and why woodpeckers are their favourite birds. For anyone who loves the rainforests of South America and Central America, these birds have got to be a firm favourite.

If they aren't already, then these amazing toucan facts for kids are bound to make you reconsider.

And if you are in the mood for more animal facts, why not check out these blue crab fact, or dive even deeper into these jellyfish facts.

The biology of these beautiful birds is quite surprising, and we think you might be amazed by the way their tongue looks and what their gigantic beaks are made out of!

1. The Toco Toucan is the largest toucan of the species, and it measures a huge 25 inches, with a beak that is 19 cm long and neon orange in color.

2. Surprisingly, the beak of a toucan is quite soft, which means that toucan birds are not very good at digging or fighting to get food.

3. Toucans are monomorphic, which means that the male and female birds look the same as each other.

4. Although the inside of a toucan beak is made from bone, the outside is made of keratin, which is the reason it's soft.

5. The toucan has a tongue that's six inches long and very narrow.

6. The tongue of the toucan looks like a feather.

7. Toucans sleep on their beaks so that they can stay warm, because they manage their body temperature by adjusting the blood that flows to their beak.

8. There are over 40 different species of toucans. That's a lot of types of toucan!

10. Toucans have very sharp and strong claws, which helps them to hold on to branches.

11. The body of a toucan is covered in black feathers.

12. Heat is released from a toucan's bill.

13. All of the different species of toucan like to hang out in small flocks with other birds.

14. The smallest type of toucan is called the aracari bird.

16. One of the oldest toucans around lived past the 20 years average life span and made it to 26!

17. The toucan bird has a huge bill. Compared to the size of its body, it has the biggest bill out of every bird in the world.

18. Although most people think a toucan always has a black and orange beak, there are actually a lot of different types of toucans in the rainforest that have variations of beak colors, including red, green, brown, black and yellow.

19. The scientific name for a toucan is Aulacorhynchus Caeruleogularis - that's a bit of a mouthful!

20. The group of birds that the toucan belongs to is called the ramphastidae family.

21. The Keel Billed toucan is a large bird from the south of Mexico and the north of Columbia.

22. The Keel Billed toucan is only between 17 and 22 inches in height on average which is smaller than the Toco toucan.
‍

If you ever wondered how toucans reproduce, then we've got all the toucan facts for you to help you get to grips with the process.

23. Toucans mate once each year.

24. The exact reason for toucans having such a colorful beak isn't clear, some scientists believe it is so they can hide in the bright flowers of the rainforest, and others think it is part of their mating ritual.

25. Depending on which species of toucan you look at, they can lay between one and five eggs at a time.

29. When toucan babies are born, they do not have a large beak. This develops as the toucan grows older.

These are some of our favourite fun facts about toucans including their favourite time to sing and the reason you probably won't see them flying around very often.

31. Toucans are louder in the day time than the morning or the evening, which is different from almost every other type of bird.

32. The biggest predators to toucans are big cats like jaguars, snakes and humans.

33. Because they have to flap their wings so much when they fly just to go a short distance, toucans are actually much more likely to be found sitting in trees than flying around.

34. The toucan is famously the national bird of Belize.

35. Toucans are actually related to the woodpecker family.
‍

Have you ever wanted to know where toucans live? We think you might be surprised at some of these crazy facts about toucans of the rainforest!

36. Toucans can most commonly be found in South America.

37. They also live in the Caribbean and Central America, as well as the south of Mexico.

38. Toucans can also be found in the Savannah.

39. Deforestation in rainforests mean that a lot of the toucan's natural habitat has been destroyed. This means they've become an endangered species.

41. It's hard to believe that these brightly colored birds are good at camouflage, but their colors are designed to blend in expertly with bright South American plants so they can hide easily.

42. Even though their habitat is being destroyed, toucans are actually more at risk of being captured and sold as pets because of how brightly colored they are.

What Do Toucans Eat?

With a whole rainforest to explore for snacking, it's no surprise that toucans have a wide range of tasty treats to choose from. Get to know what the colorful birds like to tuck into in their day-to-day.

43. The toucan diet is omnivorous.

44. Most toucans are classed as frugivores because their diet is mostly fruit.

45. Although toucans mostly eat fruit, sometimes they eat the eggs of other birds, insects, frogs and reptiles if they have the opportunity.

46. Toucans have beaks with a serrated edge like a bread knife, this is so that they can cut food up easily to eat it.

47. Because they eat a lot of fruit, they don't need to drink much water, as the fruit has a lot of water inside it.

When you're as brightly colored as the Toco toucan, it makes sense that people want to take your picture. Toucans are popular cultural symbols and we bet you've seen them around... maybe on a popular breakfast cereal?

48. Native American tribes often use the toucan on their Totem pole designs, because it is known as a symbol of communication and showmanship.

49. Indigenous people view the toucan as one of the sacred birds and believe that these birds help the living to connect with the world of spirits.

50. In Western society, the toucan is a symbol of playfulness and intelligence.

51. The mascot for the popular breakfast cereal, Kellogg's Fruit Loops is a toucan. He's called Toucan Sam and has been the face of the cereal for over 50 years.

52. The drinks brand Guinness decided a toucan as their logo after the advertising agency owner S. H. Benson visited a zoo and was amazed by the colorful birds.

53. When Europeans first set foot in the Americas, there were so many toucans that they most likely would have been the first bird they saw.

54. Dora the Explorer had a friend called Senior Toucan who was one of these fabulous multicolored birds.

55. In the year 2015 a toucan was attacked by some teenagers in Costa Rica, which caused the country to change its laws on animals.

56. There is even a star constellation which is named after the toucan.

57. The exact figure is unknown but there are believed to be only just more than 10,000 toucans left in the world.

60. Unlike everyone's favorite chatty bird, the parrot, and despite all of their appearances in TV shows, toucans can't actually talk.

Here at Kidadl, we have carefully created lots of interesting family-friendly facts for everyone to enjoy! If you liked our terrific toucan facts about the iconic bird then why not take a look at these wonderful clownfish facts, or some cool facts about sharks?