The Gruffalo At The Lyric Theatre Is Brilliant: Here's Why A family took the Tube to the deep (not so) dark city... When you're given the opportunity to watch a live show of one of your favourite children’s books, you don’t say no. After emerging from the Tube station (you don’t really want to drive to the Lyric Theatre on Shaftesbury Avenue), we picked up our Kidadl tickets for The Gruffalo and made our way to our seats. We had seats in the stalls, and booster seats are provided which meant that everyone could see. It was the woods we could see while we waited, looking just like it does in the book, so everyone was excited from the get-go. As the lights went down, it was clear that, despite the familiarity, there were a few worried little faces in the crowd: does the Gruffalo like eating children?! Happily he does not!

Tall Stories have been performing The Gruffalo for many, many years, and the current trio of performers have tweaked it into a familiar, fun and suitably funny show. It is packed with catchy songs, obligatory jokes for the grown ups, audience participation (we know who is to blame for my little one roaring on the way home) and, of course, the story that we all know and love.

It has been some 20 years since the story of the little brown mouse wandering through the woods in search of a nut was first published. The mouse valiantly avoids being eaten, outwitting a fox, an owl, a snake and of course the Gruffalo along the way.

The characters of Fox, Owl and Snake have all been brought to life with different personalities; a sort of wide-boy Fox, an eccentric pilot Owl, but my favourite was Snake, a self-confident Spaniard whose costume and dancing had the whole audience joining in. Though these characters and their costumes vary quite considerably from the book, it is easily forgiven and all is back to normal when we finally meet the Gruffalo, who very much looks like you expect him to.

There is no mistaking those turned out toes, the poisonous wart on the end of his nose or indeed the purple prickles all over his back! And while there were a number of nervous gasps from some of the kids in the audience, this Gruffalo is a warm jolly giant, even if he is hungry!

Top tip: if your little one is particularly (or even slightly) nervous, perhaps avoid the front row or the sides of the stalls because this Gruffalo will come to you and ask you to take him home. Tempting though this was for some, there were quite a few trembling toddlers, and at least one that was sobbing. Hats off to the one child that stared the Gruffalo down. The safety of the middle of the row prompted my little one to pipe up “it’s only a person!”.

With the Gruffalo safely returned to the stage, it wasn’t long before the mouse scared him off backstage altogether and we see Mouse getting that longed-for and well-earned nut. Another rendition of the most catchy Gruffalo song, and suddenly the show was over, with not one fidgety child in sight.

The Gruffalo is an engaging and fun show aimed at children over 3 (though babes in arms are welcomed) and is the perfect length for toddlers and preschoolers. In the heart of theatreland, the Lyric Theatre is surrounded by fantastic places to eat and explore, so you can easily make a day of it. The show's run ends on Sunday 8 September 2019, so get in there quick! 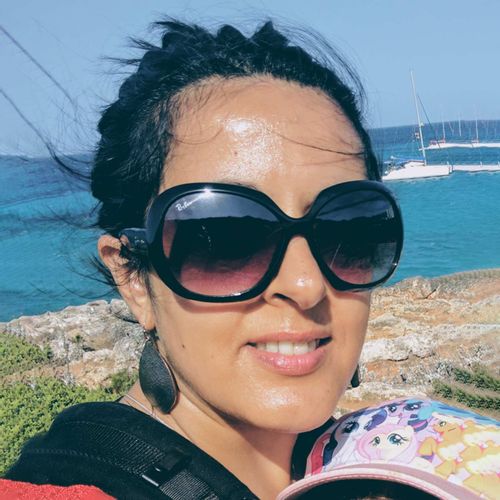 Annika is a mum of two and Londoner who likes to drink tea. She also likes to take her kids on days out and explore new places. She has a tendency to make her kids walk for miles to squeeze in as much as possible into a day, possibly bribing them with ice cream along the way.