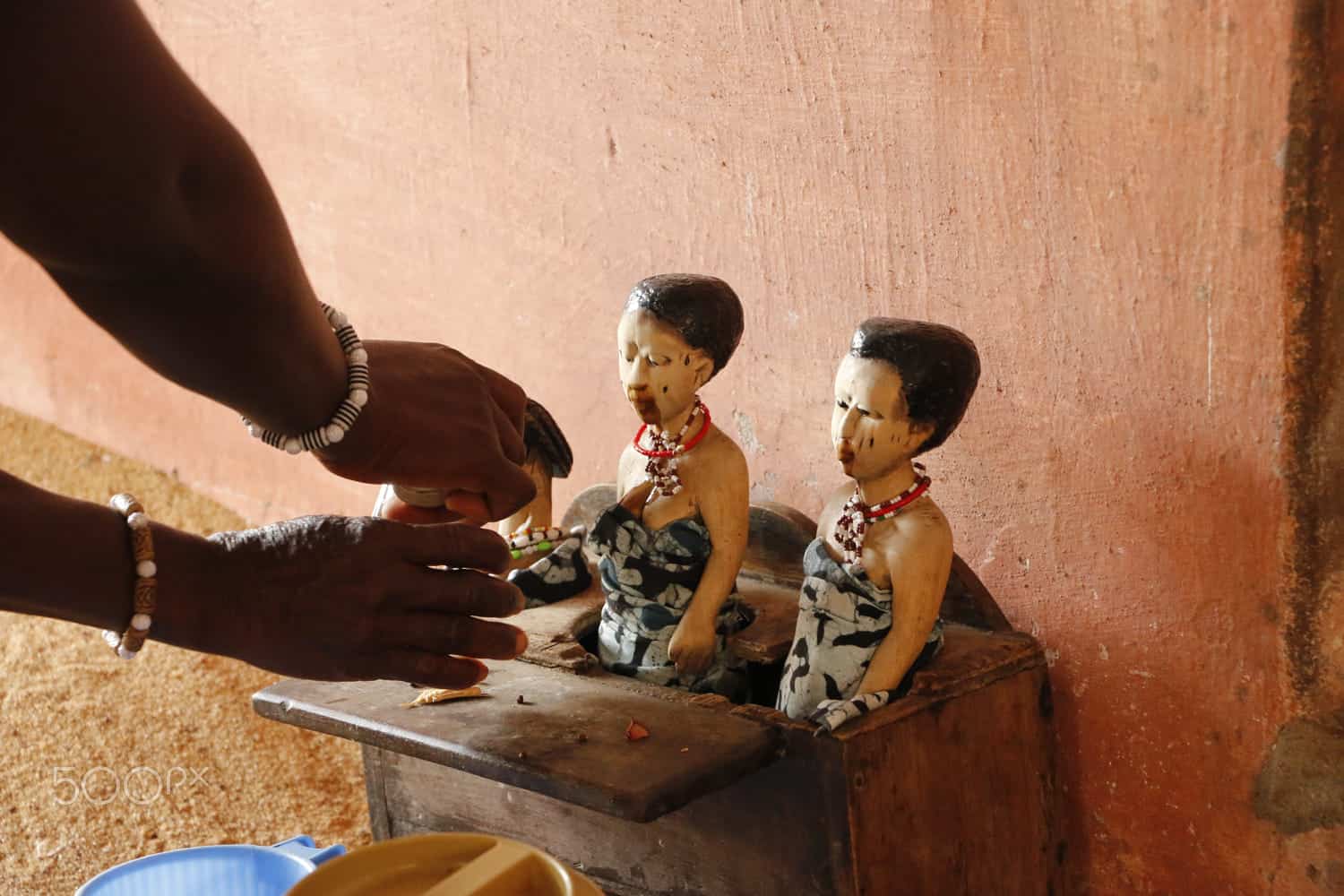 Voodoo is a religion which originated from an Afro-Caribbean religion Voudon.

Just like any other religion there is a lot stigma around Voodoo from people who don't understand it. It is one of the reasons that people tend to skip discussing Voodoo culture.

People who follow this religion have their own cultural elements such as personal creed, ethics that have transformed and transmitted across generations. They have their own folklore, stories, songs. Their followers can be found mainly in the United States, Jamaica, Brazil.

Though who founded the Voodoo religion is unknown, it could not have been the work of a single person but a collective formation of beliefs and traditions. Sources trace it to the 18th and 19th century Dahomey in West Africa practiced by a tribe named ‘Yoruba’. Its origins go back to 6000 years old. Over the time many enslaved Africans brought their culture and traditions to the west and it kept growing from then.

The followers of Voodoo believe in a supreme god named Bondye and the communication between them and Bondye is conveyed through spirits or in Voodoo term ‘Loa’. There is an utmost importance of a Loa in the life of a follower. Each Loa represents an aspect or a part of their life. Loa are called by Voodoo priests or priestesses in order to participate in their services and fulfil their wishes. Sometimes a loa is known to communicate with prophecies and warnings to a believer.

‘Papa Legba’ is the name of the Voodoo King, he acts as the intermediary between Loa and humanity. He is known by many names according to the region he is being worshiped. Papa Legba is the guardian of the center of power as well as support in the home. He is depicted as an old and feeble man with cane in Haitian religion, and often associated with Dogs which are sacred to him. As he is one of the most important characters who know all the languages, the service begins by offering prayers to him first. Red is the color that is commonly associated with Legba.

Baron Samedi, one of the Loa from Haitian religion is the god of death. Baron Samedi is depicted as someone who resembles a dead person being taken for burial. His appearance consists of black tail coat, top hat, dark glasses and nostrils plugged with cotton. He also has the powers of healing someone with black magic and Vodou curses. Baron spends most of his time in the invisible realm of Vodou spirits. He is the leader of Guede, a Loa family who work with the dead.

As Voodoo originally is a religion from Africa which came to New Orleans, Louisiana in the early 1700s. And at that time Catholicism was a prevalent religion in New Orleans. The Voodoo was interfused with Catholic practices. For example, Papa Legba of Vodou was syncretized with St. Peter who is the keeper of the keys to gates of heaven. Today Voodoo beliefs are still followed by its believers in New Orleans and across the world. Many rituals are held privately as it serves to connect the followers to their ancestors. There is a temple dedicated to Voodoo, as well as a museum that tells about the evolution of Voodoo religion in New Orleans. People visit the tomb of Marie Laveau, a famous practitioner of Voodoo to pay their homage. There are also some shops around the city that offer products related to Voodoo practices and assistance in a ritual.

Here is a list where you will find some names of various male deities that people worship in Vodou religion:

1. Adya Hount'tò, a loa from West Africa Vodun who is associated with drumming.

2. Agassou, a deity who is known for guarding the old traditions of Dahomey.

3. Agé, a mythological deity of Fon people, and patron god of wilderness, hunters and animals.

4. Agwé, a Haiti loa and patron of sailors and fisherman in Vodou religion.

5. Azaka Medeh, a kind and gentle loa associated with harvest in Haitian region.

6. Azaka-Tonnerre, a Haitian loa, who represents thunder. A favorite name.

7. Bedessy, known to hold and control the domain of the sky.

8. Baron Cimitière, known for guarding and protecting graves of the cemetery.

9. Baron Kriminel, a loa who is much feared spirit in Haitian religion.

10. Baron La Croix, a loa associated with death and sexuality.

12. Boli Shah, a loa who is known to protect families in Haitian Vodou.

13. Bossou Ashadeh, a loa who is depicted as a horned bull.

15. Captain Debas, a family loa of the Guédé. Definitely a favorite voodoo name.

16. Clermeil, a loa responsible for making rivers flood their banks.

17. Congo, a fierce yet handsome loa who is associated with man-eating.

18. Damballa, an important deity who is considered as the primordial creator of every life.

19. Dan Petro, a loa who acts as a protector of farmers.

20. Dan Wédo, a loa of waters, represented as in a serpent form.

21. Diable Tonnere, a deity in Haitian religion who preside over thunder.

22. Diejuste, a loa in Haitian Vodou known for kindheartedness and benevolence.

23. Dinclinsin, a loa represented as a white colonial slave owner.

24. Ghede Linto, a docile and well-mannered loa who performs miracles.

25. Ghede Nibo, a loa and leader of the spirits, adopted by Baron Samedi.

27. Grand Bois, a loa in Haitian Voodoo, is associated with herbs, trees and plants.

28. Joseph Danger, possibly a loa from Louisiana Voodoo religion. One of the best names you will find.

29. Kalfu, often syncretized with Satan, he visualized as a young man or as a demon.

30. Kokou, one of the most intimidating warrior under god in the Yoruba religion.

31. L'inglesou, a loa known for killing a person who offends him.

32. Loko, a loa who is the patron of trees, healers and plants.

33. Marassa Jumeaux, are the oldest known divine twins in Vodou.

34. Mombu, a loa who is responsible for torrential rain. One of the best voodoo spirits names.

35. Ogun, a deity who is followed by blacksmiths, hunters, warriors in Yoruba region.

36. Pie, a soldier-loa who resides at the bottom or rivers and causes floods.

37. Shakpana, the divinity of smallpox, known for inflicting disease on humans.

38. Simbi, a loa depicted as a snake, who represents magic. Another favorite voodoo name.

39. Sobo, a loa of thunder in Haitian Vodou. One of the cool voodoo priest names.

40. Sousson-Pannan, a malicious loa known for drinking blood and liquor.

41. Ti-Jean Petro, in Haitian Vodou he is known as a snake-loa.

43. Xevioso, a Voodoo god of thunder in Dahomey mythology.

Here you will find some names of various female deities that people worship in French Vaudou religion:

44. Anaisa Pye, in Dominican divisions she is considered as a patron saint of money, love and general happiness.

45. Ayida-Weddo, a loa known for water, fertility, winds in Vodou religion. A cool name from our list.

46. Ayizan, a loa who is associated with commerce and marketplace.

47. Erzulie, a loa known for femininity. One of the best voodoo priestess names.

48. Filomez, a rare and potent loa from Rada nation. One of the voodoo queens.

49. Gleti, worshiped as the mother of all the stars in Dahomey mythology.

50. Mademoiselle Charlotte, often difficult to obtain, as she only appears to one whom she fancy.

51. Maîtresse Délai, a Voodoo loa and also a patron of tambourine players.

52. Maîtresse Hounon'gon, a Vodou loa name who presided during an ordeal by fire.

53. Maman Brigitte, a goddess of death, originated by many Irish legends and myths.

55. Marinette, a loa known for violence and power. One of the cool voodoo queen names.

56. Mawu, in Dahomey mythology, is associated with the sun and moon. A name to love.

57. Nana Buluku, a supreme creator in Dahomey mythology who first gave birth to the universe.

58. Yemoja, a water spirit depicted as a mermaid who governs everything related to women.

Kidadl has lots of great names articles to inspire you. If you liked our suggestions for Voodoo names then why not take a look at Jamaican names or for something different try Old French names.