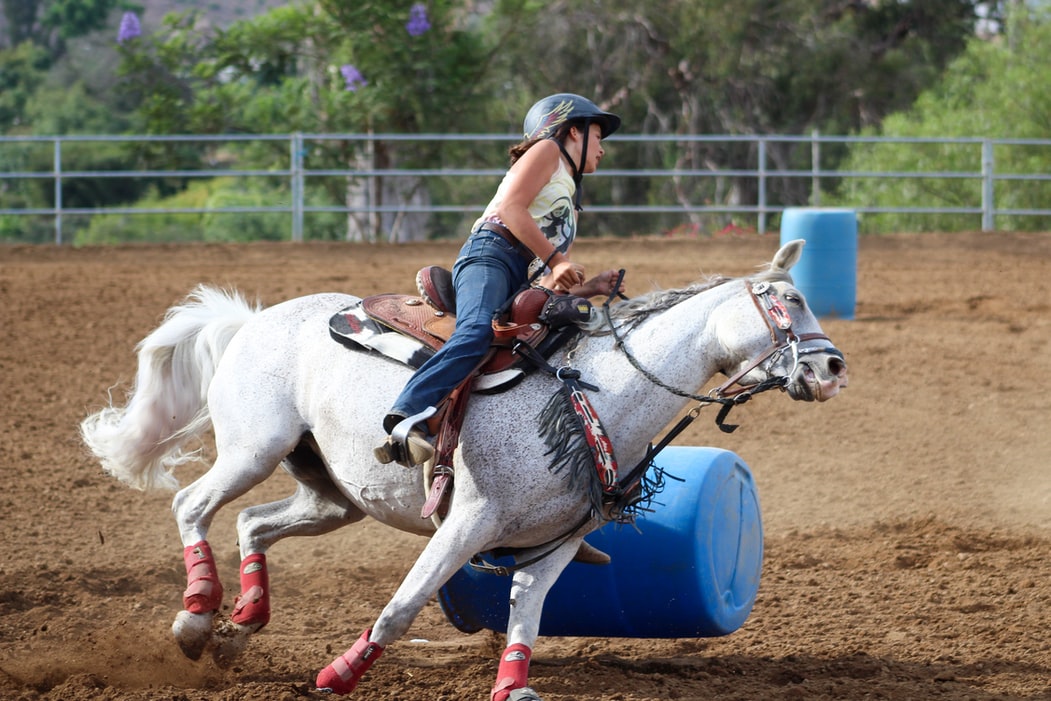 During barrel racing, a horse with a rider attempts to run a cloverleaf pattern around set barrels in the fastest time they can. Most barrel racers are primarily young women, although anyone can take part in the sport.

As described, in the event a horse and rider run an interchanging pattern around predetermined barrels within the quickest time possible. No matter how talented the horse is or how skilled the rider is, a single minor error may be the deciding factor over whether or not they leave the event with an award. A barrel racer must understand the event and its rules and have a solid educational program. Every movement they make affects the horse and its body. The rider’s acquisition skills, the horse’s mental condition, and the horse’s athleticism are all crucial to providing a decent time.

For a barrel racing event three barrels are placed during a triangular pattern, and the barrel racers should ride around all three barrels. Whoever takes the least time, wins. If a rider knocks down a barrel, a five-second penalty is added to their time. If the rider touches a barrel or if the barrel simply tips, but doesn't fall to the ground, then there's no penalty. Any deviation from the interchange pattern can also end in a no score. Average times depend upon the size of the arena, they usually vary from fifteen to thirty seconds though.

Barrel horse racing is all about kicking up dust and going fast enough in speed to clear the course as quickly as possible. A barrel rider can never be afraid of the speed in the competition. Here are some of the horse barrel racing quotes from the sport.

1. "I figure if a girl wants to be a legend, she should just go ahead and be one."

2. "Sometimes it is the most difficult horses that have the most to give you..."

4. "The horse. Here is nobility without conceit, friendship without envy, beauty without vanity. A willing servant, yet never a slave."

There are many strong and inspiring barrel horse riding quotes that we have collected for you to enjoy.

5. "Courage is being scared to death, but saddling up anyway."

6. "Ride aggressive, be confident because it's all or nothing, and the number one thing is you cannot ride timid!"

7. "I want a horse with a heart above all other. I don't care... just how much that his grandmother won, or whether he's roan, palomino, or dun. But give me a horse with some grit and some try, and some heart and some guts and that's the one I'll buy."

8. "You mentally get a hold of yourself and don't let that moment control you. You go do what you've done a million times. You go get around three barrels."

Here are some short barrel racing quotes for readers.

9. "Let's see you ride a 1200 pound muscle machine at full speed turning barrels on a dime and still keeping your balance."

10. "What lies behind us and what lies before us are small matters compared to what lies within us."

11. "Run at your dreams head-on. Let the wind blow through your hair, freedom move underneath you, and trust your best friend for the ride of your life."

12. "How bout them cowgirls, boys, ain't they sumthin? Sure are some proud girls, and you can't tell 'em nothin'."

Here are some motivational barrel racing quotes that will definitely inspire you.

13. "Things may come to those who wait, but only the thing left by those who hustle."

14. "If you aren't afraid of the speed, then you aren't going fast enough!"

15. "This changes everything, but it doesn't change the way I think about my horse. God is good, my horse is awesome and this is amazing."

16. "Why worry? If you've done the very best you can, worrying won't make it any better."

21. "My horses' hooves are swift as rolling thunder! He carries me away from all my fears... And when the world threatens to fall asunder... His mane is there to wipe away my tears!"

Here at Kidadl, we have carefully created lots of interesting family-friendly quotes for everyone to enjoy! If you liked our suggestions for the top 21 barrel racing quotes and sayings then why not take a look at these [Woody Paige quotes] or [horse riding quotes] for more?