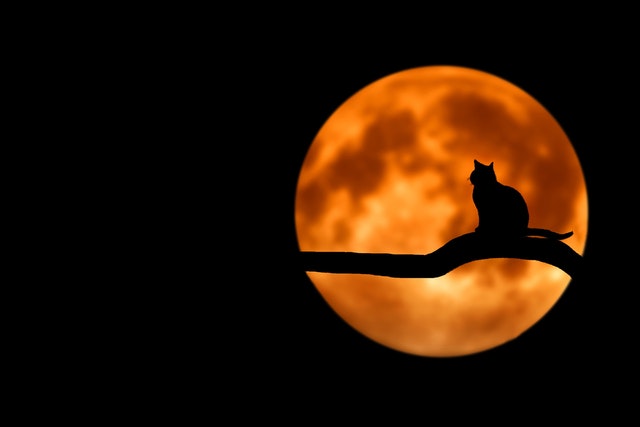 Magical or mystical names are extremely intriguing and can be a really great choice for your cat.

Be it through movies or books; everyone would like to have a magical touch in their lives. So, choosing the right fantasy name for a pet or a character can be both a taxing task as well as an exciting one.

Cats have a mysterious and naughty image. However, they also have been associated with witchcraft and hence, have a magical element to them. Dwell in the fantasy world with these cat names inspired by mythological, spiritual, astronomical, and magical names from pop culture.

If you are searching for cat names with a magical touch, check out this list of magical cat names.

2. Allanon (M) after the powerful male wizard from 'The Elfstones of Shannara.'

7. Glinda (F) (Welsh origin)meaning "fair", after Glinda the Good Witch from 'The Wizard of Oz'.

9. Midnight (M/F) is a great choice for a black furry cat with magical powers.

10. Phoenix (M/F) (Greek origin) meaning "deep red". This cat name inspired by the mythical bird is a perfect choice for a cat name.

11. Prospero (M) (Spanish origin) meaning "fortunate", after a sorcerer in Shakespeare's 'The Tempest'.

13.Theodora (F) (Greek origin) meaning "gift of God", after the wicked witch from 'The Wizard of Oz'.

16. Yennefer (F) (Welsh origin) meaning "fair one", after a witch from 'The Witcher' series.

This list of mythical cat names includes names inspired by myths and legends.

18. Amunet (F) (Egyptian origin) meaning "the hidden one", after the Egyptian primordial Goddess of mystery.

20. Bastet (F) (Egyptian origin) meaning "she of ointment jar", is the Egyptian Goddess of cats.

21. Cassandra (F) (Greek origin) meaning "helper of men", is a Greek prophetess who could see the future.

22. Echidna (F) (Greek origin) meaning "viper", after the name of a monster from Greek mythology.

25. Lilith (F) (Latin origin) meaning "belonging to the night" refers to a demon.

27. Niamh (F) (Irish origin) meaning "radiance", after the Goddess of the sea in Irish mythology.

28. Orion (M) (Greek origin) meaning "rising in the sky", after a hunter from Greek mythology.

29. Osiris (M) (Egyptian origin) meaning "powerful", after the Egyptian lord of the underworld.

30. Remus (M) (Latin origin) after one of the twin brothers who founded Rome.

31. Romulus (M) (Latin origin) meaning "citizen of Rome", after one of the twin brothers who founded Rome.

32. Sekhmet (F) (Egyptian origin) meaning "power" or "might", after the Egyptian lioness Goddess of war.

33. Thoth (M) (Egyptian origin) meaning "he who is like the ibis", after the Egyptian God of the moon.

35. Zeus (M) (Greek origin) meaning "God", is the ruler of all gods in Greek mythology.

Mystical And Unique Names For Cats

Check out this list of magical and unique names for cats.

39. Azrael (M) (Hebrew origin) meaning "angel of God", is the Archangel of death in Judaism and Islam.

45. Rune (M/F) (Norse origin) meaning "secret". It is a letter or mark used as a mystical or magic symbol.

46. Saturn (M) (Latin origin). This cat name inspired by a planet is one of the best names for cats.

47.Tarot (M/F) (French origin) after the fortune-telling cards used by witches or seers.

There are many magical cats throughout popular culture. Choose from this list of magical cat names from famous movies, novels, or comics.

50. Balerion (M) is the kitten of Rhaenys Targaryen from 'A Game of Thrones'.

51. Binx (M) is the immortal black cat from the film 'Hocus Pocus'.

52. Cheshire (M) is the cat from the popular franchise 'Alice in Wonderland'.

53. Greebo (M) is the foul-tempered cat from 'Discworld' books.

54. Minerva (F) (Latin origin) meaning "Goddess of wisdom". Minerva McGonagall from the 'Harry Potter' series can transform herself into a cat.

If you like your cat having a spiritual side, why not give them a name inspired by spirituality? Check out these Spiritual Cat names that we have arranged for you.

68. Shaman (M/F) (Indian origin) meaning "holy man", is an emissary who interacts with the spiritual realm.

69. Altair (F) (Arabic origin) meaning "bird", is the brightest star in the constellation of Aquila.

71. Aquila (M/F) (Latin origin) meaning "eagle", after a constellation in the celestial equator.

77. Nashira (F) (Arabic origin) meaning "bringer of good news", after the giant star in the constellation of Capricornus.

78. Nebula (M) (Latin origin) meaning "mist", after the giant cloud of dust and gas in space.

79. Sirius (M) (Greek origin) meaning " glowing", after the brightest star in the universe.

80. Themis (M) (Greek origin) meaning "divine law", is the name of a group of asteroids.

If you are searching for some transcendent female names of cats, you have come to the exact place. Here is a list of such female names.

82. Asterope (Greek origin) meaning "lightning", after the name of an asteroid.

86. Isolde (German origin) meaning "she who is gazed upon".

87. Katniss meaning "an aquatic plant", is the protagonist of 'The Hunger Games'.

90. Tinker Bell meaning "ringer of bell", after the fairy from 'Peter Pan'.

A male cat with a mysterious vibe is quite interesting and makes the cat stand out. We have compiled a few mystical male cat names for you.

92. Aerglo referring to the faint light emitted by stars in the night sky.

95. Gandalf (Norse origin) meaning "staff-elf", a powerful wizard from 'The Lord of The Rings'.

96. Leo (Latin origin) meaning "lion", after one of the zodiac signs.

98. Vagus (Latin origin) meaning "wanderer" is a perfect name for a stray cat.

Kidadl has lots of great names articles to inspire you. If you liked our suggestions for Fantasy Cat Names then why not take a look at Cat Goddess Names, or for something different take a look at Famous Wizard Names.