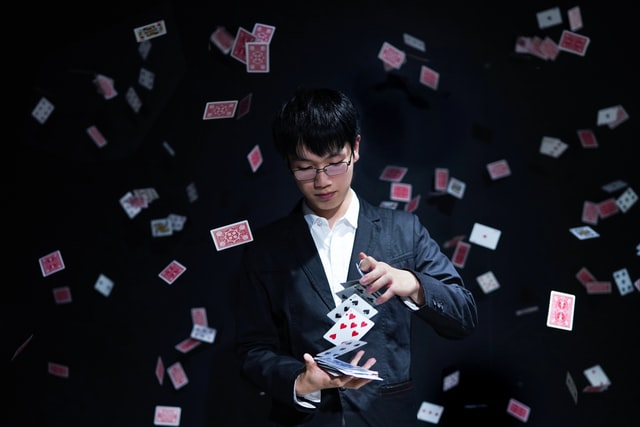 Magic and magicians and magical things have always enthralled people.

Equally fascinating are the names of magicians. Famous magicians put in a lot of thought before choosing their stage names.

While Merlin and Gandalf are good wizard names, a real magician should look for a name that connects with people. Their names should have a bit of shazam and sass to create an allure around them. If you wish to form a magical character for your story, then you can opt for the names of famous magicians that we have handpicked for this list.

For more naming inspiration take a look at these magical boy names and magical girl names.

Want to pay tribute to a magician who inspires you? Here are 20 names of famous magicians.

1.Apollo (Greek origin) is the name of the Greek God of Sun. Additionally, Apollo Robbins is a famous magician and illusionist with this name.

6.Henning (Swedish origin) meaning “ruler of the house”. A magician who used this name was Canadian Doug Henning.

9.Blackstone (English origin) meaning the “one who lived near a dark stone”. Harry Blackstone Sr and Jr were top names in American magic.

10.Houdini was a name invented by the greatest magician and escape artist of all time, Harry Houdini.

11.Thurston (Nordic origin) meaning “the stone of Thor”. Howard Thurston was a pioneer of modern magic.

13.Labero is the stage name of Joe Labero, who got the name by abbreviating his original name.

15.Lance (English origin) meaning “land.” A magician with this name is Lance Burton.

17.Penn (English origin) meaning “someone who lives by the hill”. Penn Jillette of the legendary duo Penn & Teller has this name.

18.Raymond (Germanic origin) meaning “wise protector”. Teller of the Penn & Teller duo has Raymond as his first name, but he doesn’t use it.

20.Valentino (Italian origin) meaning “strength". Val Valentino is a legendary magician who opened new horizons for magic in the ’90s.

Names That Mean Magic Or Magician

Take a look at these cool magician names.

32.Kuzelnik (Slovak origin) meaning "one who does magic".

37.Magique (English origin) is an old word for "magic and tricks".

41.Ody (Malagasy origin) meaning "spell workers". This is a short and sweet name.

42.Saaxir (Somali origin) means "magician or wizard" and can make for a spellbinding name.

Cool And Funny Magician Names That Mean Mystery Or Mysterious

55.Rejtelyes (Hungarian origin) stands for "mystery" but is scarier rather than mysterious.

57.Siri (Swahili origin) means "mysterious", and it looks like Apple certainly knew it.

These names should provide plenty of inspiration for aspiring female magicians.

63.Dorothy (Greek origin) meaning “gift from God”. Dorothy Dietrich was instrumental in breaking the glass ceilings for women in magic.

67.Kristen (Greek origin) meaning “the anointed one”. Kristen Johnson is a magician and an escape artist.

68.Lisa (English origin) meaning “the promise of God”. Lisa Menna is one of the twentieth century’s most significant female magicians.

A gender-neutral name could make one of the best names for magicians. Here are a few unisex magician names.

71.Angel (Greek origin) meaning “messenger”. Criss Angel is one of the most famous magicians of all time.

72.Cagliostro was the name taken by Italian occultist Guiseppe Balsamo and is a great unisex name for magicians.

75.Lu (Chinese origin) is a proper unisex name, and it means “musical note”. Lu Chen is linked with this name.

78.Randi (Arabic origin) means “beautiful” and is a unisex name. James Randi is associated with this name.

79.Roy (Anglo-Norman origin) meaning “chief”. A unisex name, Roy was the name of one half the Siegfried & Roy magic pair.

Names Of Magicians In Pop Culture

Here are the best magical names to choose from magicians appearing in the world of fiction and cinema:

82.Angier (Germanic origin) has the meaning of “God’s spear”. Robert Angier was the lead antagonist in 'The Prestige'.

83.Atlas (Greek origin) refers to an ancient Titan. It is also the lead character’s name in the ‘Now You See Me’ movies, Daniel Atlas.

84.Balthasar was part of the Three Wise Men that visited after Christ’s birth and the protagonist’s name in ‘The Sorcerer’s Apprentice’ movie.

85.Barney (English origin) means “trouble”. Barney Stinson is a character in ‘How I Met Your Mother' who can also do magic.

86.Cutter (English origin) is someone who cuts things. John Cutter played the role of mentor magician in ‘The Prestige’.

87.Eisenheim was a fictional magician played by Edward Norton in the movie ‘The Illusionist’.

89.Fruit Pie is the name of a famous magician mascot.

90.Gilbert (Norman origin) means “bright and noble youth”. Gilbert Wooley was a magician played by Jerry Lewis in the movie 'The Geisha Boy'.

93.Mandrake (Latin origin) refers to a plant and is also the name of a comic book character.

94.Melisandre is the name of a pivotal 'Game of Thrones' character who is supposedly blessed with magical abilities.

95.Meritt (English origin) meaning “quality”. Meritt Mckinney was the name of the magician played by Woody Harrelson in ‘Now You See Me’.

96.Nevla (Indian origin) meaning “mongoose”. It is the name of a mongoose magician in the animated series ‘Littlest Pet Shop’.

98.The Great Merlini is a fictional detective and professional magician created by Clayton Rawson and inspired by the mythical wizard Merlin.

100.Zatanna is a DC Comics Superhero who also works as a stage magician.

Find The Best Pub With A Play Area Near You
Ellie Sylvester
No items found.