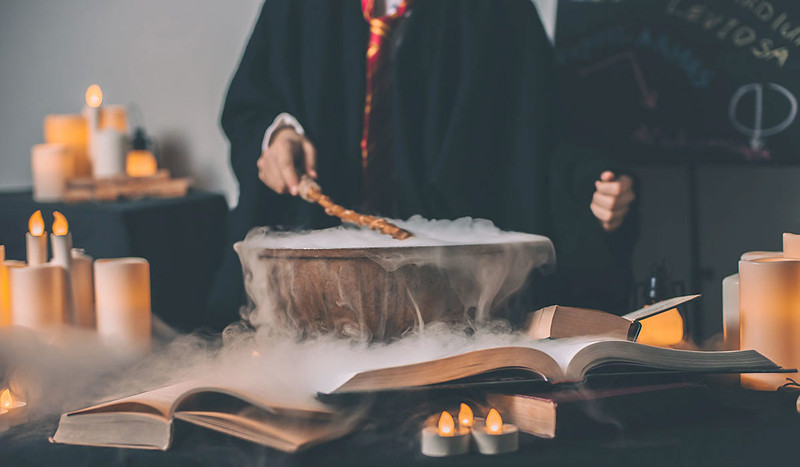 Witches, wizards, and all things magical have enchanted people of all ages.

The very possibility of another magical reality existing perhaps in a parallel dimension is food for thought. In fact, there are hundreds of people in this reality itself who actually believe in and practice witchcraft and wizardry.

You might be a person who loves magic and would like to have a magical nickname for yourself, your child or your character. If you're seeking a magical name for a witch or a wizard, refer to the lists below.

1. Abraham (Hebrew origin) meaning "father of many", an Egyptian mage, who taught magic.

3. Albus (Latin origin) meaning "bright"; the most famous name of Professor Dumbledore, who was the headmaster of Hogwarts School of Witchcraft and Wizardry in the 'Harry Potter' stories.

4. Ambrose (Latin origin) meaning "the immortal one"; a warlock from 'Chilling Adventures of Sabrina'.

9. Blaise (French origin) meaning "to lisp"; the name of a powerful warlock from Arthurian Legend.

11. Dune (English origin) meaning "a ridge or mound created by the wind"; one of the warlock names appearing in  'Warlock: A Novel Of Ancient Egypt'.

17. Gerald (English origin) meaning "ruler of the spear"; one of the most famous warlock names.

18. Gwydion (Welsh origin) meaning  "born of trees"; one of the male witch names appearing in 'The Four Branches of the Mabinogi'.

19. Harry (German origin) meaning "estate ruler"; one of the most famous wizard baby names from the 'Harry Potter' series.

32. Percy (French origin) meaning "one who pierces the valley"; the titular character in 'Percy Jackson' movies.

34. Phoenix (Greek origin) meaning "Blood Red"; a mythological bird that is reborn from its ashes.

37. Radagast (Fictional origin) meaning "tender of beasts"; a wizard from 'The Lord of the Rings'.

45. Saruman (Fictional origin) meaning "man of skill", the main antagonist in 'The Lord of the Rings'.

Here's a list of the most enchanting witch names.

52. Agnes (Greek origin) meaning "pure"; the first woman who was executed for witchcraft.

55. Allegra (Italian origin) meaning "joyful"; one of the popular and powerful witchy names.

59. Astra (Greek origin) meaning "Of the stars"; a character from 'Doctor Who'.

60. Aurelia (Latin origin) meaning  "the golden one"; a wind witch from the mountains.

70. Circe (Greek origin) meaning "bird"; a sorceress dwelling from the island of Aeaea.

73. Edith (English origin) meaning "one who is prosperous in war"; the name of an English Wiccan.

74. Elizabeth (Hebrew origin) meaning  "pledged to god"; a famous witch who was executed in the Salem witch trials.

75. Elsie (Scottish origin) meaning "pledged to god"; the name of a character in the book, 'Witch for a Week'.

76. Eris (Greek origin) meaning "Strife"; the name of the goddess of discord and strife.

86. Lucia (Latin origin) meaning "light"; a martyr from the fourth century, who was famous for taking food to Christians hiding in the catacombs.

88. Mira (Latin origin) meaning "peace"; the name of the protagonist in the novel, 'Mira, Mirror'.

90. Ondine (German origin) meaning "water spirit"; a nymph who fell in love with a mortal.

Kidadl has lots of great names articles to inspire you. If you liked our suggestions for Warlock Names then why not take a look at Pagan And Wiccan Names, or for something different take a look at Australian Girls Names.